The pandemic may be ebbing in the United States, but office life won’t be returning as before, according to Stanford economics professor Nicholas Bloom. His research shows that the majority of Americans want to keep working from home for at least part of the week. That’s good news for productivity, which Bloom predicts increases by 5 percent when working from home, mostly thanks to the elimination of commute time. But it’s bad news for city centers who’ve seen their star fade after decades in the limelight, reports Bloomberg News. “We call it the ‘Donut Effect,’” Bloom says in the article. “The places losing the most people are centers of big cities.” The upside? “[M]aybe people that need to work in the business premises five days a week—who were priced out but are actually the very people that should be living in the city centers—will return.”

Investigating the origins of COVID-19.

For much of the pandemic, prevailing wisdom held that COVID-19 occurred naturally after jumping from animals to humans, but there’s increasing awareness that this is far from a certainty. On May 13, the journal Science published a letter signed by 18 scientists stating that it was still unclear whether the virus occurred naturally or was the result of a laboratory accident. The letter was spearheaded by David Relman, a professor of microbiology and immunology at the School of Medicine, who says it’s imperative to pursue a robust investigation despite its inherent political challenges. “Greater clarity about the origins will help guide efforts to prevent a next pandemic,” he told Stanford Medicine. “A credible investigation should address all plausible scenarios in a deliberate manner, involve a wide variety of expertise and disciplines, and follow the evidence.”

Stanford’s 2021 Commencement ceremonies this weekend will be split over two days to comply with physical distancing and health guidelines—which means two alumni will address the graduates. Atul Gawande, ’87, a surgeon, public health leader and writer for the New Yorker, will speak at the ceremony for graduate and professional degree candidates on Saturday, June 12. Issa Rae, ’07—an actor, writer and producer renowned for her HBO show, Insecure—will address undergraduates at their ceremony on Sunday, June 13. “As Stanford alums, Atul and Issa can provide a special lens as our graduates, who have navigated the pandemic’s challenges and uncertainties, look beyond the Farm and prepare to apply their knowledge, make discoveries, create solutions—and tell their own stories,” Stanford president Marc Tessier-Lavigne told the Stanford News Service. Due to COVID-19 restrictions, the ceremonies at Stanford Stadium are open only to graduates and invited guests. Both ceremonies will be livestreamed and recorded.

Speaking of recording events, if you’ve got a graduate in your life, take a decent photo of them. Last year, photographer to the stars Art Streiber, ’84, joined Stanford magazine magazine on Zoom to give tips on taking a great iPhone portrait.

Professor of education Jo Boaler is one of the authors of California’s proposed new math framework for public schools, which aims to improve equity in math education and provide more pathways in higher-level math. (Read: One could take data science instead of calculus in 12th grade and remain competitive for colleges. Fuzzies rejoice!) The framework also recommends that schools not “track” students starting in middle school, instead keeping most students together through 10th grade—and out of algebra until 9th. (Students currently in the most accelerated math tracks take algebra in 7th or 8th grade and finish calculus in 11th or 12th.)

People are having strong feelings about this, including Rep. Ted Lieu, ’91, who tweeted that he thought the framework would take the state backwards. “You will be hurting an entire generation of children and our future. Do not do this,” he said.

“We’re not kicking calculus to the curb,” Linda Darling-Hammond, professor emerita of education at Stanford and president of the state Board of Education, told the San Francisco Chronicle, adding that the research shows that “the rush to calculus without the depth of understanding is not beneficial to long-term math achievement.” Boaler, who responded to concerns about the framework in a recent ABC interview, says that among the goals of the proposed framework are improved mindsets and creating math classes that inspire and interest students. 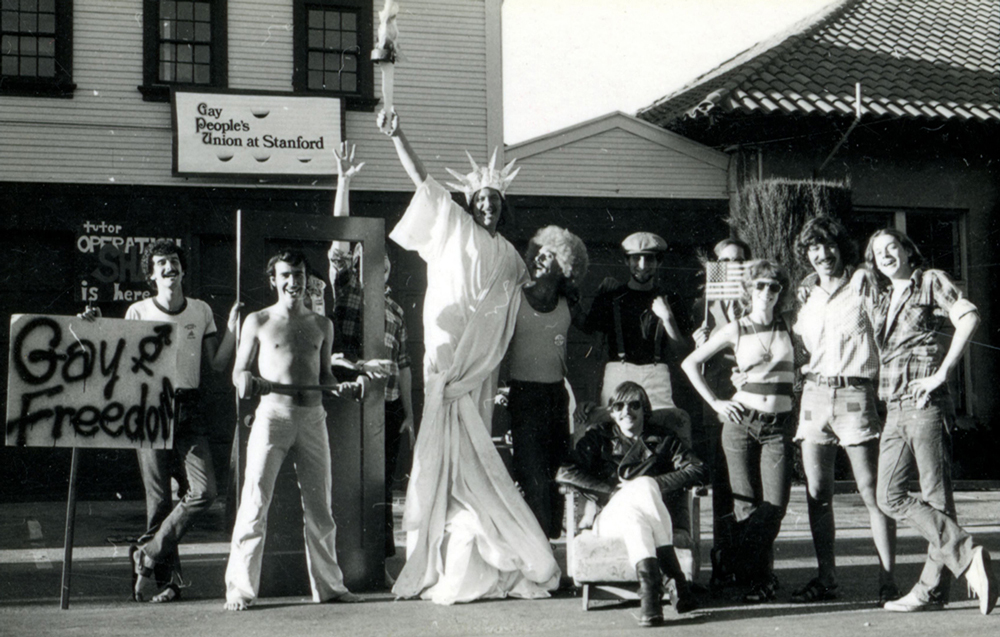 Students pose for a photo during Stanford’s 1974 Gay People’s Union conference and Gay Pride Week. 47 years later, Stanford Medicine has announced a new online course that aims to address the gap in medical education when it comes to LGBTQ+ health. “None of the schools I attended offered training in LGBTQ+ health,” course leader and associate professor of emergency medicine Michael Gisondi told Stanford Medicine’s Scope blog. “The idea is for health professionals to learn about caring for LGBTQ+ individuals in ways that are welcoming and sensitive to their health needs, concerns and experiences, without assuming their concerns center on HIV and sexual health. A medical school curriculum that solely presents queer patients in the context of HIV/AIDS overlooks the reality that the LGBTQ+ community leads rich, happy lives.” Meanwhile, the Stanford-led Population Research in Identity and Disparities for Equality (PRIDE) Study is also at work, documenting every aspect of how being a sexual or gender minority affects a person’s health, including the resiliencies and strengths specific to those communities. Stanford magazine reported on that study in the spring.

Due to COVID-19 restrictions, Rachel Heck didn’t arrive on campus until February, months after many collegiate golfers had started competing. But the late start did nothing to stop an absolutely scorching finish. The freshman won six times in nine starts, including her last five events, culminating in Stanford’s first individual women’s NCAA championship. Heck is just the third woman in NCAA history to sweep the postseason with victories at the Pac-12 championships, regionals and nationals. Along the way, she set a new NCAA record with a 69.72 scoring average. “When I was sitting in my room in January and they told us we couldn’t come back for another few weeks, there’s no way I pictured that I would be here in a few months,” she told the Golf Channel.

Fooled again. (And again. And again.)

America’s high schoolers apparently need a fake-news filter in the worst way. In a new study—the largest of its kind—researchers from the Graduate School of Education gave 3,446 teenage participants a series of online challenges. In one task, students were shown a video that circulated on Facebook in 2016 claiming to show ballot stuffing during Democratic primary elections and asked to determine whether the video provided strong evidence of voter fraud. Despite access to search tools, just three of the study’s participants—less than one-tenth of 1 percent—were able to find the true source of the video (which in fact featured footage of voter fraud in Russia).

Overall, researchers found that students were too easily swayed by weak indicators of credibility—a website’s appearance, the characteristics of its domain name, the site’s “About” page or the sheer quantity of information on a website. “The study should be troubling to anyone who cares about the future of democracy,” said Joel Breakstone, PhD ’13, director of the Stanford History Education Group and the study’s lead author. “We have to train students to be better consumers of information.” In 2017, Stanford magazine gathered expert tips to help anyone become a better fact checker.

Incoming frosh Alexandra Huynh, of Sacramento, has been named the 2021 National Youth Poet Laureate. The previous laureate was Amanda Gorman, who became an international celebrity after reading at President Joe Biden’s inauguration.

You’re not nervous—you’re excited. And other tips for hacking your speaking anxiety from Think Fast, Talk Smart.

As a member of the Cardinal women’s soccer team, Catarina Macario, ’21, was the terror of opponents, scoring in almost every game she played while leading the squad to two national championships. She was recently named to the U.S. women’s national team roster ahead of a key pre-Olympic tournament.

A new Stanford-led study finds that pregnant women’s risk of depression nearly doubled after the pandemic triggered lockdowns in March 2020.

Dave Lu, MBA ’04, saw the spa attacks that killed six Asian women in Atlanta in March as a call to action. He responded with an open letter in the Wall Street Journal calling on business leaders to support the Asian American and Pacific Islander community, then joined fellow Asian American business leaders to create Stand with Asian Americans, a nonprofit that has committed $10 million over the next year to fight hate crimes and discrimination and to increase AAPI representation.

Quilter and grad student Mackenzie Leake, MS ’20, has developed an algorithm that handles the geometry of pattern design, allowing quilters to focus on the creative aspects of their projects.