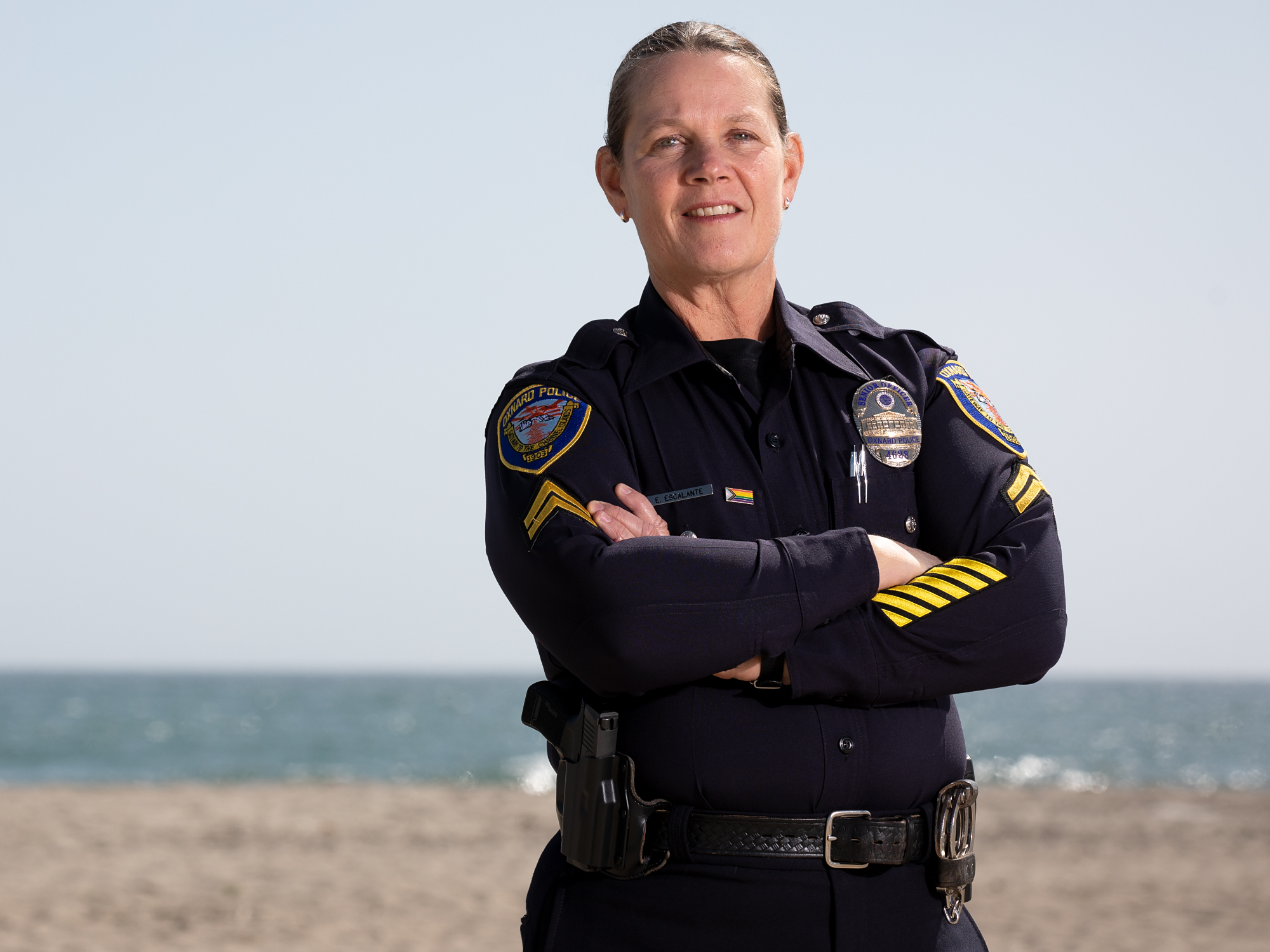 “If I shoot this gun today and I don’t vomit, I can do this job,” Erica Escalante told the firing range instructor during preparatory training for police academy. That was 1998, in Oxnard, an oceanside city in Ventura County, Calif., and Escalante, ’90, a former linguistics and Slavic languages major, had never touched a firearm. “I didn’t want anything to do with guns,” she recalls. She hoped to join her local police force because its culture was changing to allow officers to work more closely with the community. In the years since, she has achieved her goal, becoming Oxnard Police Department’s LGBTQ+ liaison officer, running LGBTQ+ sensitivity trainings within the department and establishing herself as an expert in preventing elder abuse.

The unlikely path to Escalante’s 23-year career as an Oxnard officer winds through the West but began just a few miles away, in the town of Camarillo. Her last name was Deese-Dobson then, and Camarillo was largely white. Growing up, she recalls being curious about other cultures and the town’s history (Camarillo was founded by two prominent Californios), and angered by her mother’s racist comments. From the time she hit puberty, she knew she was lesbian and that her sexuality wouldn’t be accepted in her community. “I was so excited when I was admitted to Stanford because it was so close to San Francisco,” she recalls, but upon arrival, she was shocked to hear homophobic jokes on campus so frequently. “So I just jumped in the closet,” she says. After graduation, she did a few years of graduate studies in linguistics at the University of Texas at Austin before the law career of the woman she was dating took the two to Seattle. There, Escalante accepted whatever jobs she could find—driving a school bus, folding cardboard in a shipping center, working on a dairy farm. One day, she saw women officers on bike patrols and thought, “Wow, that’s so cool.” This was the mid-’90s, and Seattle was pushing to create a more diverse police force and do community policing, which relies on strong relationships with community members to better protect them. Escalante—an avid cyclist who’d been on Stanford’s team—liked the idea of outdoor work and thought that the police might be interested in hiring someone like her. Growing up, she’d understood that women and children often had no one to go to for help, and she now considered that she might find satisfaction investigating crimes that rarely saw justice. But by then, her girlfriend had a job with the public defender’s office and hated the police, telling her that they all lied to convict people. A few years later, after the couple separated and Escalante moved back to Camarillo to stay with her parents, she rekindled her interest in community policing.

‘I also knew there were a lot of really good, progressive people.’

Her introduction to the police department was as a civilian employee. She applied to be a records clerk but scored so high on the entrance exam that the department gave her an IT job upgrading and maintaining computer systems. For the next three years, she familiarized herself with the department’s culture, occasionally hearing about police brutality. “But I also knew there were a lot of really good, progressive people,” she says. She remained determined to join the force.

During that period, her younger sister, only 19, died of long QT syndrome, a genetic condition that resulted in heart failure. Escalante’s grief delayed her applying to become an officer, and the pain of this period dovetailed with the hardship of her six months in the police academy. One of three women in a class of around 50, she was singled out as too educated. “‘You’re just here to find out about law enforcement so you can smear law enforcement all over the place,’” Escalante recalls an instructor telling her. She became an officer in 1998, at a time when the department was still “an old boys’ club,” she says, where officers tried to look good by racking up arrests. “All you heard about was, ‘Oh, we arrested this big drug dealer’ and ‘We arrested this guy for shooting somebody,’” Escalante says. She didn’t see many officers focusing on domestic violence, child abuse and hate crimes.

The first years were hard. As a patrol and bike patrol officer and then a school resource officer, she recalls “being ignored, invisible, undercut, not recognized for what you’re doing.” She found support in a group of like-minded officers and didn’t quit, keeping her focus on building relationships within the community. She received an award from her local chapter of the National Police Foundation for teaching community classes for women on self-defense against rape and aggression, as well as for running an education and empowerment program for children. She also introduced restorative justice for homeless people in Oxnard, which, rather than ticketing them for minor infractions, such as sleeping in public, encouraged them to use community support services. Later, as a child abuse sexual assault detective, Escalante had a major breakthrough. A 16-year-old boy reported that his godfather was molesting him. She learned that the perpetrator worked in a school, and she found other victims—two boys in a family whose trust she’d previously earned as a school resource officer. Eventually, she helped gather enough evidence that the man was convicted of rape and received a life sentence.

In 2011, Jeri Williams became Oxnard’s police chief, the first Black woman to hold the position. “She did some housekeeping,” Escalante says, recalling how Williams worked to combat the old boy culture and mentored three assistant chiefs, one of whom would ask Escalante to help create Oxnard’s LGBTQ+ training program in 2017. Escalante became the department’s LGBTQ+ liaison officer. In reaching out to community members to help with training other officers, Escalante realized that she had to address their preconceptions about the police and encourage vulnerability. “Everyone in the public thinks they know everything about police officers, because the police are depicted in movies and TV shows,” Escalante says. “Some of them were very resistant to being so open with police. They wanted to go in there like academics,” she says. She knew that if that happened, the officers would just sit with their arms crossed and remember little.

‘If you’re a police officer responding and the people don’t feel you would be comfortable talking LGBT+ issues, they’re not going to talk to you about it.’

Escalante encouraged community members to share stories about situations the police could encounter. One described how she came out to her mother, who spoke only Spanish, and how her mother locked herself in the bathroom, threatening to commit suicide. “This is a real thing that police could get called to respond to—a suicidal woman with a knife, barricaded in her bathroom,” Escalante says. “If you’re a police officer responding and the people don’t feel you would be comfortable talking about their issue, which in this case would be LGBT+ issues, they’re not going to talk to you about it. So you’re never going to know why the person is locked in the bathroom.” Escalante has also seen scenarios where a daughter has come out as lesbian and, feeling threatened by her family, has locked herself up or run away. “Maybe Dad’s got the belt out. He’s going to beat the crap out of her. Or her big brother has got his friend over and tells his friend maybe he ought to have sex with her to show her.” The officer has to grasp the situation well enough to communicate with both her and the family. Escalante knew the training was a success when officers began coming up during breaks to say that they were thinking about their own children and what they would do if one of them came out as LGBTQ+.

Assistant police chief Eric Sonstegard, who has known Escalante since she began working at the department as a civilian employee, says that she is someone members of the LGBTQ+ community “can reach out to, and a trusted voice within the police department.” Escalante’s willingness to speak out and share her personal experiences has left a mark on the department, says assistant police chief Denise Shadinger. “She gives people an idea of what it’s like to be in her role not only at the police department but in society, allowing people to see how the treatment of others can really affect them both personally and professionally.”

Over the course of her career, Escalante has seen many changes, both in her life—she took the name of her former domestic partner, and they are raising a daughter, now 16—and in her department: trainings to respond with sensitivity to people with mental illness, and police academy classes with more women than men. Though still the department’s LGBTQ+ liaison officer, she is now a detective handling fraud and financial crimes, most of which are committed against elderly people. “In our pretty large county, there’s probably nobody who knows more about investigating those crimes,” Sonstegard says.

And the changes have continued—especially since May 2020, when a Minneapolis police officer killed George Floyd. “We police officers can now speak out and say, ‘I don’t know if I would have shot that person in that circumstance,’” Escalante says. Prior to that, she says, police culture was such that critiquing other officers was acceptable only in order to promote officer safety. But since Floyd’s death, her department’s leadership has encouraged open dialogue about race and use of force—formerly taboo topics. “The fact that voices in the community are speaking out so clearly and often,” she says, “is making it a bit easier for us officers to start being honest with each other and have our own hard conversations about what we can do better.”