As COVID cases spike across the nation and in the Bay Area, pediatric infectious disease specialist Yvonne Maldonado, MD ’81, told KQED that with safety precautions, schools should be able to stay open, and emphasized the importance of vaccinating eligible children.

Stanford welcomed students back from winter break as scheduled (with rigorous testing requirements) but is holding the first two weeks of graduate classes (and the first three weeks of undergrad classes) online and taking additional measures to reduce the spread of COVID-19 on campus. Provost Persis Drell announced last week that no nonessential gatherings or events will be held indoors before January 28. Indoor athletic event attendance is currently limited to student-athlete families, while indoor live performances are being canceled or rescheduled. Drell said recreation centers and museums will remain open in January (with masking and distancing) in order to maintain a baseline of activities on campus and support emotional and physical health in the community. During the week of January 3, there were nearly 500 positive student cases on campus. “We anticipated increases in cases as more students arrived and planned in a way that would allow students to continue their academic progress,” university spokesperson E.J. Miranda told The Daily. Over the past 70 weeks, more than 840,000 COVID-19 tests have been conducted on the Farm.

They’re not kidding around.

Gen Zers and millennials may have split feelings about skinny jeans and hair parts, but members of both generations are struggling with the pros and cons of having kids in the 21st century. Stanford asked five scholars to weigh in on potential parenthood using their expertise in fields ranging from ethics to earth system science. Trent Walker, a postdoctoral fellow in religious studies, analyzes the way Buddhists might think about having children. And Hank Greely, ’74, professor of law and director of Stanford’s Center for Law and the Biosciences, says the future could see a vastly changed baby-making game: In a race between your bank account and biological clock, he wagers that your hair may be the tiebreaker. That’s right, sperm and eggs made from hair cells—whether or not you part your tresses down the center.

Can you hear me now?

Amazon’s digital personal assistant, Alexa, will obediently play white noise while you sleep and blast tunes while you cook . . . unless you have an accent. “We quickly found out, when Alexa was turning the lights on in random places in the house and making them pink, that Alexa does not understand my dad’s accent at all,” says Andrés Pérez Soderi, ’21, whose family hails from Venezuela. And the problem goes far beyond a smart cylinder in the living room. Pérez and his former classmates Maxim Serebryakov, ’20, and Shawn Zhang, ’22, have watched as friends and family members with accents struggle to be understood on the phone, at grocery stores and in the office. So they built an app for that.

Their company, Sanas, uses AI-powered software to modify people’s accents in real time. After using audio recordings from professional actors to develop a neural network, the team created an algorithm that could instantaneously recognize and convert one English accent into another (e.g., Indian to British, Filipino to Australian). The software is currently being tested in call centers, and Pérez, Serebryakov and Zhang are hoping to expand it to industries like health care before slowly rolling out a publicly available version. It’s a personal endeavor for the trio, but it stands to help more than a billion people in the world who are nonnative English speakers. Serebryakov told CNN they don’t want to erase accents or imply that one way of speaking is better than another. “We allow people to not have to change the way they speak to hold a position, to hold a job. Identity and accents is critical. They're intertwined,” he said. “You never want someone to change their accent just to satisfy someone.”

Creator of the Claw. 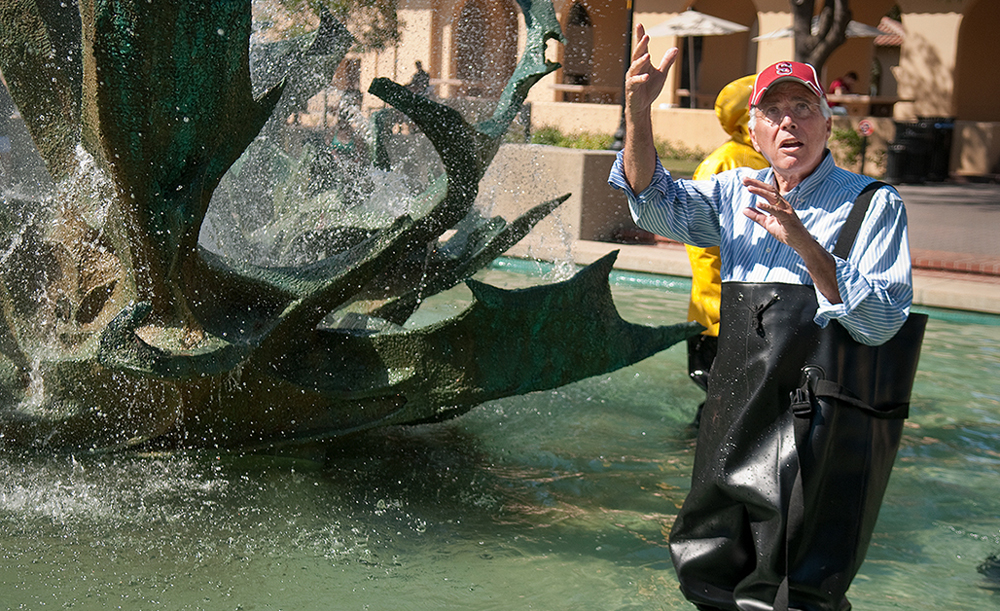 The sculptor of the Claw, Aristides “Aris” Burton Demetrios, has died at 89. The fountain was commissioned by the parents of William N. and John B. White, both ’49, who passed away before their graduation in separate accidents. Demetrios designed the fountain such that the water never falls in the same pattern—representing the fact that no one could know what paths the lives of the White brothers would have taken. The fountain was installed in 1964 and, according to Demetrios (pictured above in 2010), “it was tagged the Claw within three nanoseconds.”

Senior Mary Cooper traded one crew for another this fall—and the results were (almost) out of this world. Cooper is a member of Stanford’s lightweight rowing team and the lone varsity para-athlete in the Pac-12. Doctors amputated her left leg below the knee when she was a baby due to a condition called fibular hemimelia. She’s also an aspiring astronaut, and in October, Cooper boarded a special Boeing 727 with 11 other scientists, veterans, students and artists as part of the first all-disabled crew to experience zero gravity. For 90 minutes, the plane steeply climbed and descended in a parabolic flight pattern that repeatedly rendered its crew weightless in 20-second increments. The trip was organized by a group called AstroAccess, which promotes inclusive design in space travel. In each weightless moment, Cooper, like the others, performed a specific task related to accessibility, with experiments printed on an armband. Back on land, she can almost still feel the thrill. “Every single night, I lay in bed and try and remember that feeling of complete weightlessness,” Cooper told Stanford Athletics. “It’s a feeling I know I’ll be chasing for a long time.”

We’ve got the power.

Silicon solar panels might be the way to go for your household energy needs, but they’re far too rigid, bulky and heavy for, say, use in solar-powered aircraft. “Silicon makes up 95 percent of the solar market today, but it’s far from perfect. We need new materials that are light, bendable and, frankly, more eco-friendly,” Krishna Saraswat, a professor of electrical engineering, told the Stanford News Service.

The challenge is creating a material that meets these needs while efficiently creating energy. Silicon solar panels convert nearly 30 percent of the sunlight they absorb into electricity. Researchers using transition metal dichalcogenides (TMDs)—a promising ultralight, ultrathin, ultraflexible alternative—have struggled to surpass 2 percent. But Stanford researchers, including Saraswat, have recently found ways to create record efficiencies with TMDs that are closing the gap. Their prototype achieves 5.1 percent power conversion efficiency but is projected to be able to reach closer to 27 percent efficiency with optical and electrical optimizations. Not bad for cells that are less than six microns thick, about 1/15 the thickness of a piece of paper and moldable to irregular shapes—a car roof, an airplane wing, or even the human body. We never looked good in silicon anyway.

Keep those New Year’s resolutions going with tips from Stanford’s Resolutions collection. Whether you want to work on forgiveness, learn the difference between dicing and mincing, or start to embrace the benefits of a little stress, research-based advice awaits.

How will AI experts determine whether a robot of the future is sophisticated? The robot must be able to brush lint off clothing, install a printer, set a mousetrap and carry out 97 other mundane yet complex everyday household activities.

In a new documentary podcast, writer, editor and producer Bonnie Swift, ’08, goes on a deep dive into the captive life of Tokitae, the performing killer whale who has been kept in North America’s smallest orca tank for the past 50 years. The first eight episodes of Swift’s audio story are available now on Audible.

In the past, residents displaced during wildfires have spent days or weeks waiting for updates on the fate of their homes. DamageMap, a new computer program, uses satellite imagery and machine learning to remotely—and instantly—compare before-and-after photos to identify damaged and intact structures.

Alongside a brand-new pasta shape and a revolutionary brain-computer interface, a birth control pill case developed by Stanford neonatologist Janene Fuerch and mechanical engineer Amanda French has made Time’s list of the 100 best inventions of 2021. The Bluetooth-connected smart case, called Emme, uses sensors to track when the case is opened and repeatedly sends messages to the user’s phone until each day’s pill is gone. In a pilot test, the system reduced the incidence of missed pills by 80 percent.

Carmelo Cogliandro has been cutting hair at Stanford for 60 years. “It’s been a real privilege,” he told the Stanford News Service.

The Hoover Institution is taking a poll on which events are most likely to happen in 2022. It’s not exactly lighthearted (options include the Supreme Court overturning Roe v. Wade and Russia making a major military move) but it might give you an idea of what to prepare yourself for this year. Grab your crystal ball (and maybe booze) and cast your vote.