Growing up in Washington, D.C., Safia Elhillo relished the area’s robust spoken word and slam poetry scene. “That, I think, is where my relationship to poetry really started to form, because it felt like there were real people I could pin the idea to,” she says. Poetry wasn’t just some esoteric or unknowable craft; it was an embodied practice.

In high school, Elhillo joined the D.C. Youth Slam Team, and later became one of its coaches. Then she formed Slam NYU, a nationally ranked collegiate team, while pursuing her undergraduate degree at New York University. In 2017, Elhillo published her first full-length poetry collection, The January Children, a meditation on displacement and home. (The title refers to the British colonial practice in occupied Sudan in which children were assigned birth years by height and given the birthday of January 1.) Her novel in verse, Home Is Not a Country, was published this past March, and Elhillo is now at work on a second collection of poetry. Much of her work explores themes of familial and place-based belonging, as well as migration and ancestry.

A 2019–21 recipient of the Wallace Stegner Fellowship, Elhillo currently teaches poetry in Stanford’s creative writing department. Through teaching, she’s approaching poetry anew, rediscovering what attracted her to the form. “I love teaching because it’s so not about me. It’s nice to just step outside of [myself] a little bit,” Elhillo says. “Being around young people who are getting newly excited about poetry really keeps me from getting jaded.”

“One of the pleasures of poetry for me is just the noises that the language makes. If I wanted to make sense, I would learn to write prose. But I’m trying to make sounds. So I write poems.” 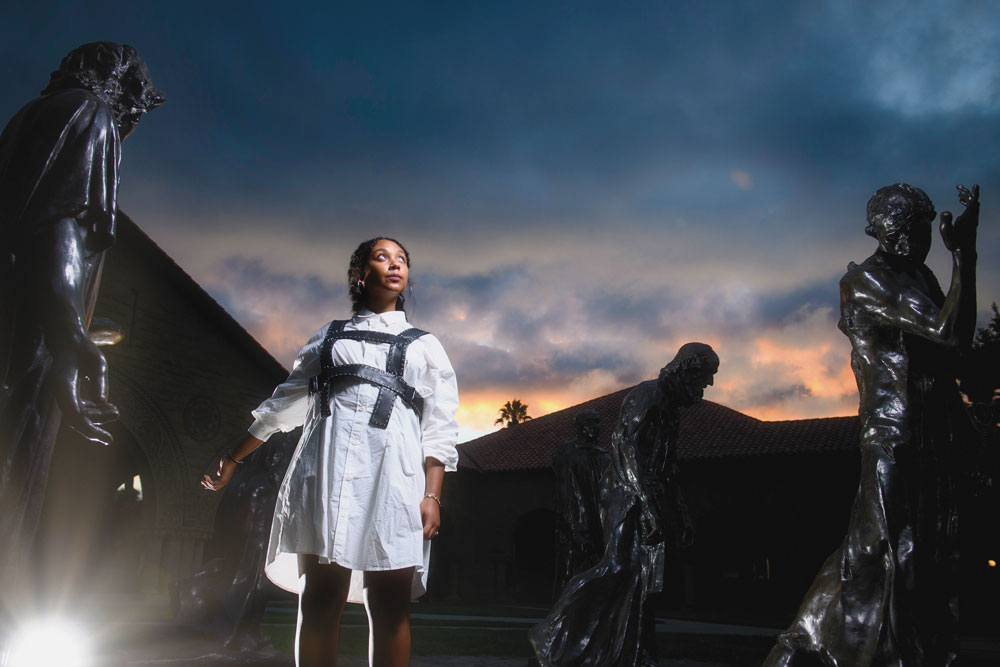 “I came of age a little bit before the YouTube of it all and the Button Poetry of it all, so the poems were really ephemera. I’d go to an open mic or a slam or something and hear someone do a really incredible poem and then be like, I really better f***ing pay attention because I might never hear this poem again. [Slam], I think, was a very safe place for me to come of age.

“I have a very casual relationship to place. I think it’s because I spent so long longing for a deeper relationship to a place that I felt like was never going to be accessible to me.

“I grew up all over. I lived in a bunch of countries before my family moved to the U.S. The longest I’ve lived anywhere was when I moved to D.C. in 2000, and I lived there until I graduated from high school in 2009. I still have not hit 10 years anywhere.

“It took me so long to get to my own ideas about how English is so not sacred, and you’re allowed to break it and fill it with new things. Where it fails, you can supplement it with another language. Grammar is not sacred, and you can modify it to suit you.

“I hope that we’ll all just storm the gates and make columns and make books and crowd the world of poetry with all of these different voices so that we can finally release ourselves from the idea that there’s one to three ways to be a whatever, a Black poet, Muslim poets, a Sudanese poet.”

Ray Levy Uyeda is a writer based in the Bay Area. Email them at stanford.magazine@stanford.edu.

Stanford people in the news and on the move.