From home brewers to survivors of San Francisco’s private-school admissions process, nobody is too difficult to shop for. Stanford’s 2021 Gift Guide for Book Lovers has a Treemendous book for everyone on your holiday list. Even young readers will find meaningful material, although the greatest gift to the kids (and parents) in your life might just be this one-minute video from the Graduate School of Education. In a first-of-its-kind study, researchers found that children who practiced just a few seconds of breathing exercises were able to downregulate their stress physiology in everyday settings outside the laboratory. As far as we can tell, there’s no age limit, so why not make mindfulness a gift for the whole family? ’Tis the season for stress reduction!

We can’t read your minds. Yet.

Scientists have long dreamed of locating thought inside the brain but have been bedeviled by how something so ephemeral can inhabit physical space—and in such quantity. If they knew where thoughts were happening, future therapists could examine the unhelpful brain patterns a patient is falling into.

Thanks to insights from machine learning, researchers have developed a mathematical way of mapping the “meaning spaces” of the brain—the spots that light up the same way in your brain as in your friend’s when you each think, for example, about a movie’s plot. “The space of possible thoughts that people can think is big—but it’s not infinitely big,” says Ken Norman, ’93, chair of Princeton’s psychology department and an expert on thought decoding. Indeed, a detailed map of the concepts in our minds might soon be within reach, and “general-purpose thought decoder” might be the next step for research, Norman told the New Yorker. “The mind—the only truly private place—has become inspectable from the outside,” James Somers writes.

Jackie Botts, ’16, MA ’18, wasn’t even done with her master’s degree when she began work on a data journalism project for Reuters that demonstrated how the Supreme Court’s continual refinement of a legal doctrine has made it harder to hold police accountable for excessive force. When the 2021 Pulitzer Prize for Explanatory Reporting went to five Reuters reporters in June, newbie journalist Botts was suddenly in possession of her profession’s most prestigious prize. “I ran into the kitchen where my housemates were and cursed a lot out of confusion and excitement,” she says in Stanford. Botts is among a growing number of young alums finding success in journalism despite the industry’s struggles in the digital age. You can find their bylines in media stalwarts like the Atlantic, the Washington Post and the Wall Street Journal as well as in go-to regional publications such as the San Francisco Chronicle and Indian Country Today. “I really love the idea of accountability reporting—shining a light on issues that might not otherwise get covered, so that situations can change,” says Politico writer Marianne LeVine, ’13, MA ’14, who was in the Capitol building when the January 6 riots began.

Speaking of the future of journalism, award-winning media executive Rich Jaroslovsky, ’75, talks on the Stanford Pathfinders podcast about the quest for trustworthy digital information and his work as chief journalist for SmartNews.

Do the drones have large talons? 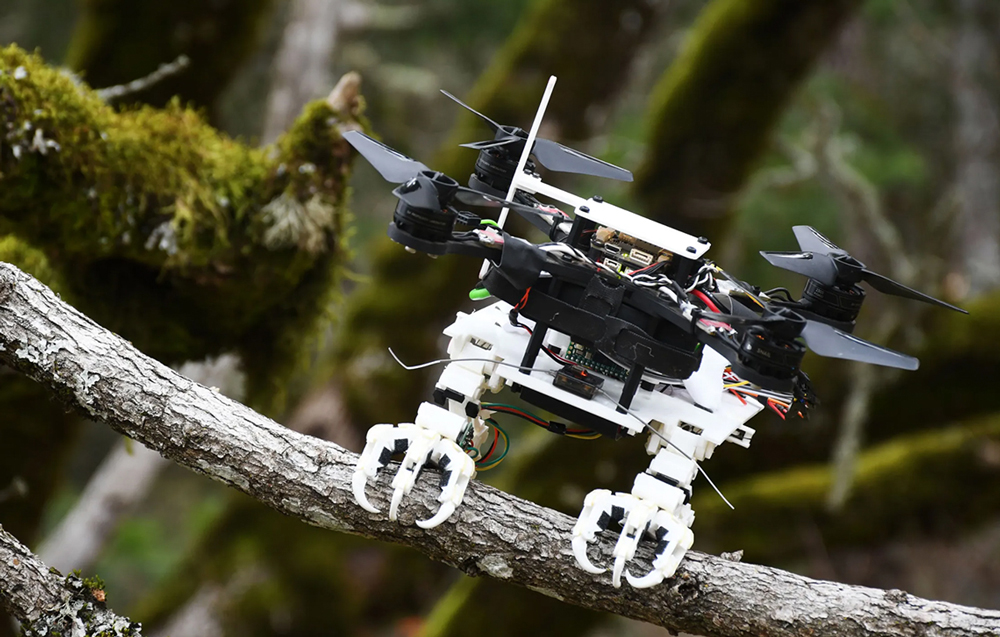 Drones may be high-flying marvels of mechanical engineering, but they often fall short when it comes to landing. Inspired by peregrine falcons, Stanford researchers have devised “stereotyped nature-inspired aerial graspers” or SNAG—legs that can clutch a branch firmly within about 20 milliseconds of making contact, then stabilize the drone using an accelerometer and a balance algorithm. So far, SNAG has been used on drones taking temperature and humidity measurements in forested environments. “It’s not easy to mimic how birds fly and perch,” says William Roderick, ’16, MS ’17, PhD ’20, who spent months testing SNAG in rural Oregon. “After millions of years of evolution, they make takeoff and landing look so easy.”

We regret to inform you that there is more evidence that exercise is good for you. Or at least for mice. Researchers at the School of Medicine recently found that sedentary mice did better on learning and memory tests after being injected with blood from mice that had run for miles on exercise wheels. In one test, sedentary mice that received the runners’ blood were twice as fast at finding a platform submerged in water. The study also found that brain inflammation associated with Alzheimer’s and other neurological disorders was reduced after the transfusions and that the mice produced more of several types of brain cells, including those that generate new neurons in the hippocampus, a region involved in memory and spatial learning. The lesson here, to be clear, isn’t to ask your friend with the Peloton for blood. But there’s still time to add a gym membership or a giant hamster wheel to your holiday wish list.

Thanks to grad school pauperism, you may someday eat Michelin-star meals at McDonald’s prices. Alex Kolchinski, MA ’20, Alex Gruebele, MS ’17, PhD ’21, and Max Perham, MS ’17, have formed Mezli to build fully autonomous, modular restaurants and make great food more affordable. Their prototype restaurant is a 10-foot by 20-foot box with a tireless, unpaid sous chef who works 24–7 with near-perfect consistency. (Don’t worry—while the chef himself has Michelin cred, his underling is a robot.) Their fine-dining Mediterranean grain bowls, which cost $6.99 and up, are currently available only at Mezli’s KitchenTown location in San Mateo, but the trio of engineers aims to expand rapidly. “We expect to hit 1,000 locations faster than other restaurants due to our mass production method,” Kolchinski told TechCrunch. “I think this is one of the many [ways that] something that used to be a luxury becomes democratized.”

For readers of a certain age, inflation is an old acquaintance returned, but for those Americans too young to have lived through the disco era, it’s all new. So what gives? John Cochrane, a senior fellow at the Hoover Institution and at the Stanford Institute for Economic Policy Research, gives a primer on his blog, the Grumpy Economist.

If you look closely, you’ll see Boise State geophysics professor Jeffrey Johnson, ’95, MS ’96, in Will Smith’s new six-part National Geographic series Welcome to Earth, which premiered on Disney Plus last week. The first episode follows Smith and hiker Erik Weihenmayer as they descend into the Mount Yasur volcano on Vanuatu, guided by Johnson.

Assistant professor of art history Emanuele Lugli on the history of coloring and why you should go outside the lines. (And then tag @StanfordAlumni in your pic.)

Time crystals now exist outside of 1980s Jim Henson movies. In their efforts to engineer the computer of the future, a team of scientists, including Vedika Khemani, assistant professor of physics at Stanford, have created a new phase of matter called a time crystal.

He predicted his diabetes and detected his Lyme disease. He’s had 12 full-body MRI scans in the past five years. Find out how Michael Snyder’s self-monitoring project could transform human health, in Stanford’s December issue.

If you need a new excuse to pass on eating your aunt’s holiday fruitcake, School of Medicine professors Tracey McLaughlin, ’88, MS ’05, and Catherine Blish found that the coronavirus infects both fat cells and certain immune cells within body fat, which may help explain why people carrying excess pounds are often more vulnerable to the virus.