The power of the mind; the reason behind many tech layoffs; football handoff

You are (at least partly) what you think.

Alia Crum wants to explain—and demonstrate—the power of the mind over our health. For nearly two decades, the associate professor of psychology has focused her academic interests on the bodily effects of our mindset. Her research (check out this webinar) has shown that whether you believe that stress is corrosive or that it enhances performance can change the physical symptoms of tension that you experience. And believing that you are eating a decadent treat (rather than something diet-friendly) can more quickly lower a key hunger hormone. The placebo effect is real, and we can use it to our advantage. “She brought [mindset] into the health and medicine realm and started asking a bunch of new, profound, important questions,” said psychology professor and mindset guru Carol Dweck. Whether mindset can help us cure more serious health challenges, such as cancer, remains to be seen, but Crum intends to find out: “The power of the mind is likely not limitless,” she said, quoting an early mentor, “but we just don’t know where those limits are.”

It’s estimated that tech companies big and small have laid off more than 120,000 workers this year. Jeffrey Pfeffer, a professor at the Graduate School of Business, attributes mass layoffs to a simple—even mindless—phenomenon: copycat behavior. “The tech industry layoffs are basically an instance of social contagion, in which companies imitate what others are doing,” he told the Stanford News Service. Pfeffer studies the effects of work environment on human health and well-being, and says that layoffs weaken companies, create stress for people, more than double the odds of suicide, and increase mortality by 15 to 20 percent over the following 20 years. What’s more, workplace reductions often don’t even do much to cut company costs. “Could there be a tech recession? Yes,” said Pfeffer. “Was there a bubble in valuations? Absolutely. Did Meta overhire? Probably. But is that why they are laying people off? Of course not. Meta has plenty of money. These companies are all making money. They are doing it because other companies are doing it.”

If the weather outside is frightful . . . 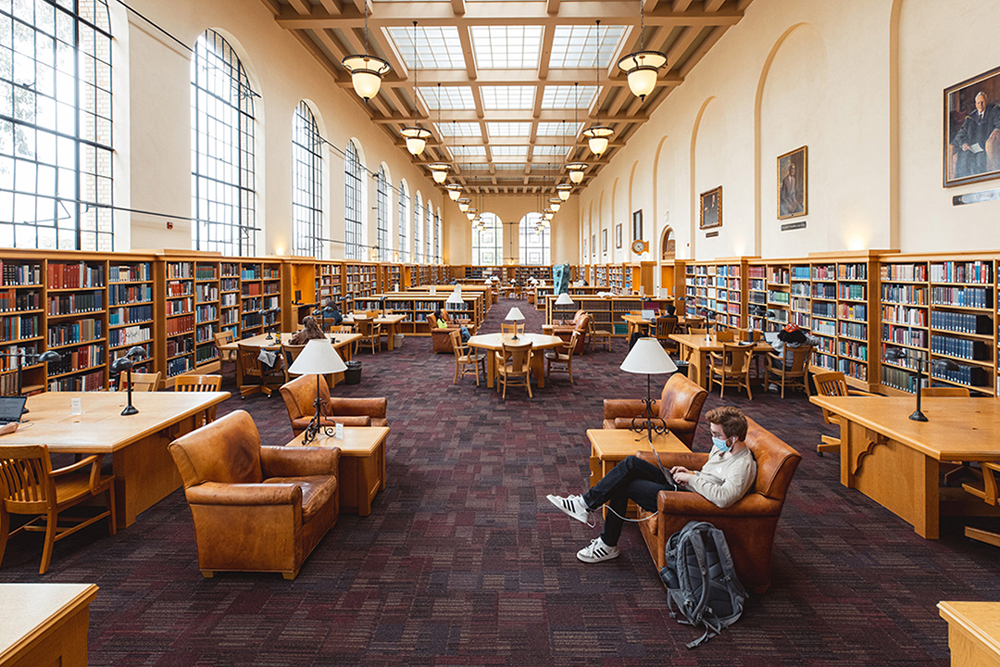 Here are 10 campus spots that are delightful. No studying required.

Troy Taylor is Stanford football’s new head coach. A former Cal quarterback (we’ll forgive him), Taylor played in the pros briefly before beginning his coaching career. For the past four seasons, he has led Sacramento State’s football program. He inherited a program that had compiled three two-win seasons in the prior four-year stretch. The Hornets won nine games in their first season under Taylor, and he guided the program to its first three Big Sky championships and its first FCS Playoff appearances in university history. In 2022, Taylor’s Hornets set the school record for victories in a season.

Taylor replaces David Shaw, ’94, who stepped down in November. After 12 seasons, the winningest football coach in program history leaves a record of three Pac-12 titles, two Rose Bowl victories, and 43 players who were drafted into the NFL—including six first-round picks. During Shaw’s tenure, Stanford’s football program included 15 Academic All-Americans, which is five more than any other program in the nation and 10 more than any Pac-12 school. “There are not sufficient words to describe the love and gratitude I feel for . . . the entire Stanford family,” Shaw said. “After many prayers and multiple discussions with my wife, one phrase keeps coming to me—it’s time.”

Before the pandemic, professor of psychology Ian Gotlib began a long-term study on depression during puberty. Lockdowns forced a stop to regularly scheduled MRIs of the 163 kids. When he and his colleagues restarted their work, they discovered troubling new data. The brain of, say, a 16-year-old today is not the same as the brain of a prepandemic 16-year-old. Adolescent minds have developed more quickly than normal. The MRI scans showed that adolescents had accelerated changes in “brain age”—structural changes that happen normally as we age but that typically appear in children only when they’ve experienced chronic adversity, such as violence or neglect. Research done prior to the pandemic showed that early life exposure to such adversity is associated with poorer mental health and maladaptive neurodevelopmental outcomes. Gotlib plans to follow the subjects through young adulthood to find out whether the changes are permanent and to track their mental health.

Now that the Loop has given you something new to worry about, we’ll take one away! Stanford Medicine researchers followed 250 children for five years to track their well-being as they became phone owners. The study showed that children’s age when they got a phone was not meaningfully correlated with their sleep patterns, depression symptoms, or even grades. “There doesn’t seem to be a golden rule about waiting until eighth grade or a certain age,” said lead author Xiaoran Sun. So if you’re on the fence about getting little Leland a phone this holiday season, Thomas Robinson, the senior author and a professor of pediatrics and of medicine, advises making the decision that’s right for your family. The average age at which kids in the study received their first phones was 11.6 years old, and half of them had a phone by 12.5. Also, though, waiting until kids were older wasn’t linked to any problems, such as ruining their life. Whatever your decision, you can tell the kids it’s backed by science.

Stanford’s Board of Trustees has formed a special committee to examine concerns of research accuracy in certain scientific papers on which Stanford president Marc Tessier-Lavigne is a listed author. Last week, Tessier-Lavigne told Stanford faculty members that he welcomes the review. “As a scientist, I am dedicated to the rigorous pursuit of the truth. The integrity of my work is of paramount importance to me, and I take any concerns that are expressed very seriously.”

When an at-home test says it’s not COVID but your general grossness says otherwise, what should you do? A negative rapid antigen test likely means that your viral load (and thus likelihood of transmission) is low. But that doesn’t mean you should show up at the holiday party. Benjamin Pinsky, professor of pathology and of medicine, advises: “If you still have symptoms and you’re able to isolate, you should.” Seriously. Please.

The solution to our water shortage woes may be right under our noses. (Or at least under our seats?) Taking the waste out of wastewater, a new study published in Nature Sustainability explains why potable reuse water is the MVP of H₂O: It’s local, it’s cheap, and it can be cleaner than conventional drinking water, thanks to more extensive treatment requirements.

Why do we relate to fictional characters? Professor of English Blakey Vermeule says literary characters have helped her navigate the social world. “We are creatures who, uniquely, become motivated by stories and thus powerfully extend our cognition,” she wrote in an essay for In Their Own Words, a series in which faculty reflect on ideas they’ve grappled with throughout their careers.

Beatriz Magaloni, a professor of political science and a senior fellow at the Freeman Spogli Institute for International Studies, has won the Stockholm Prize in Criminology, the most prestigious award in the field. In 2016, Magaloni spoke to Stanford about her research on criminal violence in Mexico.

With medical school in her sights, senior Madison Quig will be headed across the pond as a 2023 Rhodes Scholar. At Oxford, she’ll pursue a master’s in social data science with the hope of examining and addressing health disparities.

Gift givers, rejoice. Stanford magazine has oodles of book recommendations and reviews and features picks for all the readers in your life, whether they like  candid memoirs from the bench, murder mysteries, $1.99 e-books, or graphic novels about the perils of health insurance.

A psychology professor’s quest to explain—and demonstrate—the power of the mind over our health.

A geologist, a microbiologist, and a pilot walk into a space station.