A geologist, a microbiologist, and a pilot walk into a space station.

When geologist Jessica Watkins gets ready to go to sleep on the International Space Station (ISS), she climbs into her sleeping bag and zips herself up. But while her crewmates tether themselves to the wall at both the head and foot of their bags—so that they don’t float off—Watkins, ’10, likes to leave the bottom of her bag unattached. “My feet just kind of float up in space,” she says. “It’s super comfortable. Super easy to relax.”

One small nap for Watkins, one giant leap for NASA. Her work in space is key to the Artemis program, which aims to reestablish a human presence on the moon for the first time since 1972, including putting the first woman and first person of color on the lunar surface, as early as 2025. There are 18 astronauts on the Artemis team. Nine are women, and three of those are Stanford alumnae: Watkins, microbiologist Kate Rubins, PhD ’06, and Navy pilot Nicole Aunapu Mann, MS ’01. In other words, a third of the candidates for first woman to walk on the moon once walked through the Quad.

With the initial Artemis missions, NASA plans to lay the foundation for a lunar base camp at the unexplored south pole. That base, located near 4.3-billion-year-old moon rocks useful for geological research, will serve as a place for astronauts to live and work for up to two months at a time. And that is essential for Artemis’s ultimate goal: “Our sights are not set on the moon,” said chief astronaut Reid Wiseman in a NASA briefing to media this summer. “Our sights are clearly set on Mars . . . to inhabit another planet.”

The Artemis program has its first three missions planned: Artemis I, at press time scheduled for November 14, is a test of NASA’s Deep Space Exploration Systems. It will send NASA’s Space Launch System (a rocket as tall as a 20-story building) and an uncrewed Orion space capsule on a test flight around the moon to ensure a safe reentry, splashdown, and recovery. Artemis II will circle the moon with astronauts on board, testing safety controls and life support equipment. And Artemis III will land two astronauts on the lunar surface, where they’ll stay for about a week, in preparation for later missions to establish the base camp.

NASA has not yet announced which astronauts will crew Artemis II and III, but all 18 are working—whether by conducting experiments on the ISS or crafting space suits back on Earth—toward the return to the moon. Regardless of whose boot prints are left in moondust, each of the astronauts is a part of the mission to go, ultimately, where no man or woman has gone before.

Jessica Watkins’s six-month stint on the ISS, which ended October 14, was the manifestation of a dream that began when she was a 9-year-old in Maryland. She learned that Judith Resnik Elementary—where she attended an after-school program—was named for the second American woman in space, who died in the space shuttle Challenger disaster in 1986. The story might have discouraged a less adventurous youngster, but not Watkins.

“I learned that you could go into space as a career, and I was definitely hooked,” she says. As an undergraduate at Stanford, Watkins studied geological and environmental sciences (now geological sciences) after perusing the course catalog and discovering GEOLSCI 121: What Makes a Habitable Planet? (She also was a member of the women’s rugby team, which won the 2008 national championship.) 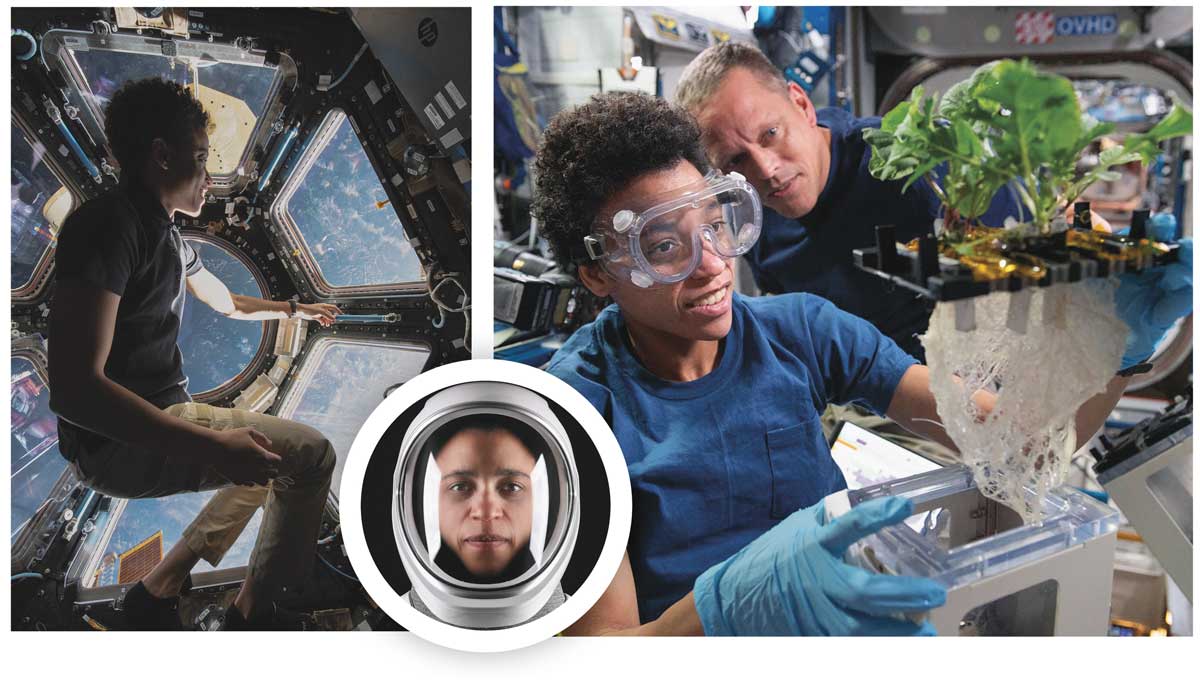 THE VIEW FROM HERE: Watkins (left) floats 272 miles over the Atlantic Ocean and works with colleague Bob Hines to test air- and water-based plant-growing techniques. (From left: NASA; SpaceX; NASA)

“I signed up for my first geology class; the rest is history,” she says. “I fell in love, and particularly in love with the idea of planetary geology—the idea of being able to study rocks on the surface of another planet just absolutely enamored me and still does to this day.” She earned a PhD in geology at UCLA, then accepted a postdoc position at Caltech, where she helped plan the daily activities of the NASA Mars rover Curiosity and conducted research on the red planet’s rock cycle. The collection of rock samples on the moon, and eventually on Mars, could one day help answer questions about the early formation of the moon, the Earth, and the universe, NASA says.

But it’s not all about rocks for Watkins. Every astronaut goes through arduous training beyond their professional specialty, including flight readiness, robotics operations, and spacecraft systems maintenance. And there’s a lot of lab work. For more than 20 years, ISS crews have conducted hundreds of microgravity experiments. “I think there are multiple benefits that we achieve from the science that we do up there,” Watkins says. “The advancements that we can make in terms of medical research—those have direct impacts into our daily lives.” So do those that could boost our food supply. Among the experiments Watkins has worked on is XROOTS, an agriculture study that uses hydroponic and aeroponic nourishing techniques to grow plants in microgravity. It could one day help humans grow crops on the moon or on Mars—essential if humans are to make a monthslong journey to the red planet and stay awhile. But the research could also enhance the cultivation of plants grown in greenhouses on terra firma, leading to better food security for people on Earth. “So much of what we do is contributing to those next steps going forward using the ISS as a test bed for future exploration,” she says.

Kate Rubins became fascinated with the genetic alphabet at age 12, when her dad brought her from their home in Napa, Calif., to a recombinant DNA conference in San Francisco. After college at UC San Diego, she earned a doctorate in cancer biology from Stanford, then ran a microbiology lab at the MIT Whitehead Institute for Biomedical Research. She was studying viral diseases when, one day, while writing grants, she took a break to fill out a job application to be an astronaut. Sure, studying biology had been one of her childhood goals, but so had exploring space. “I’d gone to space camp and had photos on my walls of galaxies,” Rubins says. “I’d never forgotten the astronaut thing.”

She wasn’t the only one with space dreams. NASA received more than 3,500 astronaut applications for the nine-member, 2009 class. “I expected a polite letter saying, ‘Good luck next round,’” Rubins says. “I got an interview. It was quite surprising.”

DON’T WORRY, STANFORD’S IN HER GENES: Rubins runs DNA-sequencing experiments (left) and installs a solar array modification kit while dangling in space, so any T-shirt she wears is OK with us.  (From left: NASA; Bill Ingalls/NASA; NASA)

Over her 13-year career as an astronaut—including 300 days in space, the fourth most by any U.S. woman—Rubins has worked on hundreds of experiments. In 2016, she became the first person to sequence DNA in space. Ongoing DNA work could one day allow astronauts to diagnose illnesses in space and identify DNA-based organisms on other planets; it has already helped identify microbes growing at the ISS without transporting them back home for testing.

It’s the 12 hours and 46 minutes that Rubins has accrued during four space walks, however, that are proving to be useful in her current assignment: helping engineers design future lunar space suits. “It’s really critical to have the experience of space walk,” she says. “You are in this permanent state of free fall. It changes how you work when you can’t put your tools down on a surface. Of course, you have absolute vacuum outside, so you have huge temperature swings, from freezing you instantly to boiling you instantly, in the course of 45 minutes. Your space suit is protecting you from all that.”

Walking on the moon will be similar. “You’ll carry a 300-pound life support system on your back,” she says. “It’s physically taxing. You’re still working against quite a bit of pressure. The inside can start to feel like steel when they pressurize you. It’s very bulky, and you lose your dexterity. The best analogy I’ve heard is that it’s like you put on oven mitts, put on roller skates, and then try to do brain surgery.”

So it helps that astronauts are required to exercise as much as two hours per day while on the ISS, she says. Space flight can be tough on the body, causing bone density loss, muscle degradation, and changes in vision and blood flow. Resistance and cardiovascular exercise, on the ground and in space, are countermeasures to keep astronauts healthy. “We definitely have to work out,” she says. “I do CrossFit, lots of squats and deadlifts.”

Nicole Aunapu Mann made history on October 5 when she launched to the ISS as commander of NASA’s SpaceX Crew-5, becoming the first Native woman in space. She’s serving on the space station until April 2023. “It’s an accomplishment I’ve been working toward for many, many years,” she says. “My family was very excited, maybe a little bit nervous.”

Raised in Penngrove, Calif., Mann says her earliest dream was to land among soccer stars. When she got the chance to play at the U.S. Naval Academy for her role model, coach Carin Gabarra (a member of the U.S. national team that won the first women’s World Cup in 1991), she grabbed it. After graduating from the Naval Academy, Mann earned her master’s in mechanical engineering at Stanford, then joined the Marines, followed by flight school.

“The summer before my senior year at the Academy, I got to ride in the back seat of an F/A-18,” she says. “That’s the same aircraft the Blue Angels fly. That was the first time I realized I could be a Marine and a fighter pilot. I thought, ‘That is the coolest thing.’”

Mann’s skill set as a Navy pilot and a mechanical engineer equipped her to lead the astronaut corps in the development of the Artemis Space Launch System rocket and the Orion spacecraft (the capsule holding the astronauts, atop the rocket). And she constantly draws on her ability to focus intensely, developed while landing jets on aircraft carriers during her deployments to Iraq and Afghanistan.

“Landing on an aircraft carrier is a difficult thing to learn,” she says. “Especially at night when the deck is pitching, especially after a long mission that could have been six or eight hours. It really teaches you to compartmentalize and focus on the task at hand.” (Her call sign, Duke—think Iceman from the movie Top Gun—came from her John Wayne–like swagger.)

That experience came in handy during what she calls the hardest part of the two-year astronaut program: spacewalk training in the Neutral Buoyancy Lab, where there are full-scale mock-ups  of International Space Station modules at the bottom of a giant swimming pool. “The trainings are six to eight hours long, both mentally and physically exhausting,” Mann says. “You’re wearing a space suit the entire time. Basically, it’s like running a marathon.”

But this marathon could come with a historic payoff. When Mann was assigned to the Artemis team in 2020, she told her then-8-year-old son, Jack, that she might walk on the moon one day. He was awestruck. “He said, ‘When you’re up there on the moon, will you look for me? Will you wave?’” Mann remembers. “For us, it was a very special moment. Now we always pause when we’re outside and see the moon.”