Could Sally Ride have had a more fitting name? Not only did it evoke the exhilaration of blasting off at 18,000 miles per hour from a Kennedy Space Center launchpad, it also echoed a 1965 R&B tune. "Ride, Sally Ride," read the T-shirts of many of the 250,000 onlookers on June 18, 1983, as the physicist-astronaut climbed aboard the space shuttle Challenger.

The first American woman and still the youngest American ever to fly in space, Sally Kristen Ride, '73, MS '75, PhD '78, died July 23 of pancreatic cancer. She was 61.

Ride's first achievements came in tennis. She was a nationally ranked junior player and reached the collegiate quarterfinals as a Swarthmore student before transferring to Stanford, where she played No. 1 singles. The tennis ace was "lighthearted," says teammate Anne Connelly Gould, who was part of a pack of summertime tennis teachers who would race to Ride's Escondido Village apartment at lunchtime to watch All My Children. "I think tennis was an outlet for her," says Gould, '72, MA '80. "Obviously, she was a very serious student."

While that very serious student was finishing her doctorate in physics, she saw a NASA ad in the Stanford Daily seeking astronaut applicants. Ride knew immediately she had the right stuff. In January 1978, she became one of the first six women named astronaut candidates. 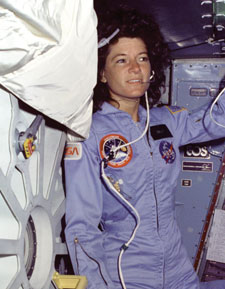 Of those six, Ride flew first. The 32-year-old had co-developed the space shuttle's robotic arm, which the crew would use for the first time on this mission to deploy and retrieve satellites. She also epitomized the cool-under-pressure mien of the astronaut, fielding the press corps' questions with aplomb: Would the flight affect her reproductive organs? "There's no evidence of that." Would she wear a bra in space? "There is no sag in zero-g." Did she cry when things went wrong on the job? "How come nobody ever asks [pilot] Rick [Hauck] those questions?"

Her flight aboard Challenger made Ride an instant celebrity. She was on the covers of Time, Newsweek and People. By the time of her next mission, on October 5, 1984, there were two women aboard Challenger. Ride was scheduled for a third mission when Challenger exploded shortly after launch in 1986; instead, she posed tough questions as a member of its accident investigation commission. When Columbia disintegrated on reentry in 2003, Ride became the only person to serve on both shuttle accident commissions.

After Ride left NASA in 1987, she spent two years as a science fellow at Stanford's Center for International Security and Arms Control, researching verification systems for nuclear warheads. "She was not a hero marching in," says SLAC professor emeritus Sidney Drell, then co-director of CISAC. "She was bright and wanting to learn and contribute. She took her knowledge of technology and space and applied it to arms control."

Ride then joined UC-San Diego as a physics professor and director of the California Space Institute. In 2001, she founded Sally Ride Science, which encourages kids, especially girls, to pursue their interests in science. "It's no secret that I've been reluctant to use my name for things," she told the New York Times in 2003. "I haven't written my memoirs or let the television movie be made about my life. But this is something I'm very willing to put my name behind."

Ride "handled major fame and publicity as well as anyone could," Drell says. "She used her name in that one way, and it had tremendous impact. Little girls were so taken with her."

Ride is survived by her partner of 27 years, Tam O'Shaughnessy, the COO of Sally Ride Science and the co-author of six of Ride's seven science books for children. Ride is also survived by her mother, Joyce, and her sister, Karen "Bear" Scott.

Kathy Zonana, '93, JD '96, is the associate director of the Bill Lane Center for the American West at Stanford.