“No Rain” vs. Shania Twain.

With a data set of more than three million songs and an algorithm that measures things like “danceability,” a Stanford professor has finally quantified the mysterious musical phenomenon of one-hit wonders. To develop a theory on the role of creativity in market success, Justin Berg, an assistant professor of organizational behavior at the Graduate School of Business, analyzed the differences between musicians who were one-hit wonders versus those with sustained successes. According to the data, getting that first hit is about having a song that’s not too different from the others out there. But having variety and novelty in one’s portfolio at the time of that first hit was linked to ongoing popularity. “Once you have a hit, novelty suddenly becomes a huge asset that is likely to sustain your success,” said Berg. He maintains that the lack of a distinctive sound is what prevented, for example, Blind Melon from capitalizing on its 1992 hit “No Rain.” As a counterexample, he credits the pioneering originality of Shania Twain’s pop-country crossover for keeping her at the top of the charts for decades. But even novelty requires focus. Once artists have established some successes, Berg’s research suggests they shouldn’t tinker too much. Says the Atlantic: “Nobody wants Bruce Springsteen to make a rap album.”

How to beat authoritarianism.

Just beyond the rubble of the “criminal, blundering invasion” of Ukraine could be a new wave of democratic progress, said Larry Diamond at a recent Freeman Spogli Institute for International Studies council meeting. Diamond, ’73, MA ’78, PhD ’80, a senior fellow at FSI and at the Hoover Institution, says the world’s autocratic powerhouses are fueled by a narrative that portrays democracies as weak, decadent and ineffectual, but the Ukraine invasion is giving authoritarianism a bad name on a big stage. “This moment could represent a possible hinge in history as significant as the 1989–1991 period that ended the Cold War,” Diamond said.

He lays out steps that he believes will help freedom prevail over tyranny, including further coordination among democratic nations that punishes Russia economically and financially and that documents war crimes. The United States must address its major domestic and international challenges “so that American democracy can once again be seen as a model worth emulating,” Diamond said. “What the Ukrainian people have suffered already in these seven weeks has been horrific, and it will get worse. But the courage and tenacity of their struggle should renew our commitment not only to them but also to ourselves—that freedom is worth fighting for.” 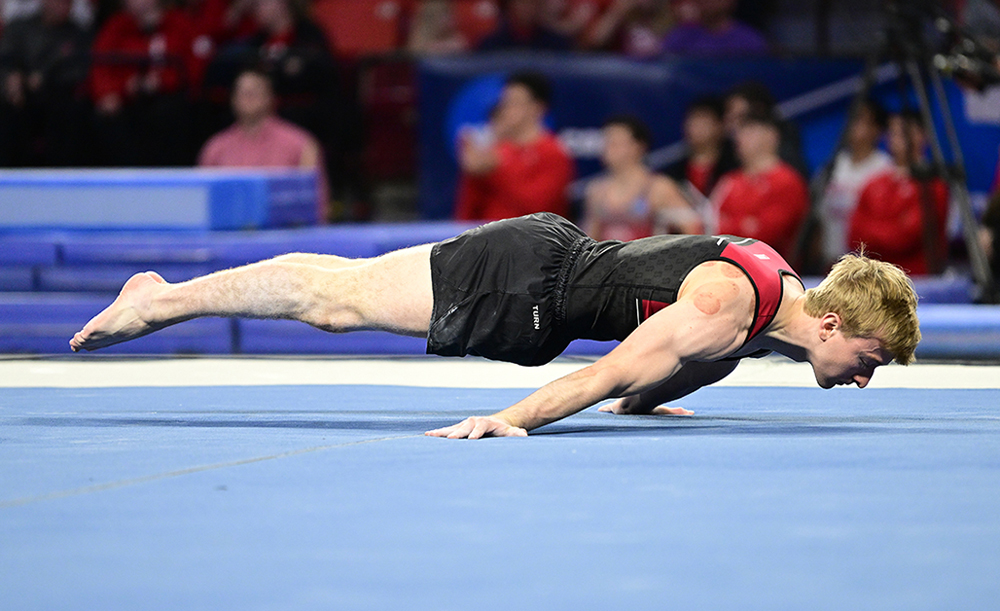 In an impressive display of things your body will never be able to do, Stanford men’s gymnastics has won its third consecutive NCAA championship. “Stanford is the most dominant team gymnastics has ever seen,” commentator and 1984 Olympic gold medalist Tim Daggett told the Stanford Daily. The team includes standouts like senior Brody Malone, the most decorated gymnast in Stanford history, and junior Riley Loos, the five-time NCAA All-American pictured above playing a game of truth or dare with his shoulders. (Watch mind-boggling video here.)

Hot on the trail.

“Forced labor is difficult to find, but satellite imagery can really help identify where it’s happening in time for inspectors to intervene more effectively,” said Victoria Ward, ’04, an assistant professor of pediatrics. She and her fellow researchers used satellite images from more than 200 sites to train an AI image-recognition tool to identify the three-meter-wide ovens. The tool was then able to pick out new sites based on current satellite images, which are collected nearly every day. “The algorithms are cheap, and the satellites are running over this area all the time,” said Michael Baiocchi, an assistant professor of epidemiology and population health. “The algorithms can monitor this relentlessly.”

I’ll have the chicken.

An endemic version of COVID—one that would behave more like a seasonal flu—is the “floating door from the Titanic on which we’d all like to ride back to normalcy.” But doctors are unconvinced that we’ll be able to swap out the prefixes anytime soon. “It’s difficult to know with confidence what endemicity might look like in the clinic,” David Relman, a professor of medicine and of microbiology and immunology, told Stanford Medicine’s Scope blog.

It’s a hard pill to swallow, but for those who struggle with swallowing pills, we have good news: You may soon be able to squirt chicken eggs up your nose for added COVID protection. (Well, purified antibodies from eggs, anyway.) Stanford researchers, including six undergraduates, recently discovered that with chicken eggs and just a few household supplies, it’s possible to make inexpensive nasal drops that may stem the spread of viruses. “Only about 10 percent of people living in low-income countries are immunized against SARS-CoV-2 in the third year of the pandemic,” said Daria Mochly-Rosen, the professor of chemical and systems biology who oversaw the research. When hens are vaccinated against COVID, antibodies show up in their eggs after just three weeks. The drops would likely only work for a few hours, but that could be enough to slow transmission of the disease in crowded environments, like on public transportation or in classrooms. The drops wouldn’t replace vaccines but complement them effectively and at low cost, Mochly-Rosen said. “If we’re trying to address an epidemic or pandemic properly, we need to make sure a solution is available fast and everywhere in the world.”

Coming soon to a dimension near you.

In order for a camera to determine the distance between two objects—like how close that pedestrian really is to a self-driving car—it needs to see in 3D. Lidar systems do that, but they’re big and bulky. To put the capability into standard sensors, you need a light (not too tricky), a modulator that turns the light on and off millions of times a second (very tricky), and a ton of energy for the modulator (ugh, forget we brought it up). Now Stanford engineers have developed an acoustic modulator to do the job. It’s compact, low-cost, energy-efficient and may integrate into standard cameras, opening up new possibilities for depth perception in drones and extraterrestrial rovers, and hopefully making selfies look less shallow.

Remember those few months in college when you partied a little too hard? For Matt Rodgers, ’91 (er, ’21?), it was his final quarter on the Farm, and it cost him graduation. Three decades later, he returned to complete his degree. He tells his story in Stanford magazine.

Former School of Medicine dean Phil Pizzo, who in 2015 founded the Stanford Distinguished Careers Institute to help accomplished individuals renew their purpose in midlife, is taking a dose of his own medicine. At age 77, the professor of pediatrics and of microbiology and immunology is embarking on a new adventure: training to become a rabbi. Pizzo, who was raised Roman Catholic, says this is a natural progression after converting to Judaism two years ago. “I’ve been lucky in my life to never have had a job,” he told the Stanford Daily. “I’ve always had a calling.”

Last week, former U.S. President Barack Obama spoke on campus at a symposium co-hosted by the Stanford Cyber Policy Center and the Obama Foundation. In his speech, Obama outlined the threat that disinformation online poses to democracy.

A traditional work of visual art doesn’t earn its creator any royalties when it is resold, even if, say, a painting increases in value from $18,000 to $90 million. Charlie Jarvis, ’19, and Max Kendrick, MS ’19, want to change that. Their start-up, Fairchain, generates digital certificates of title and authenticity, which transfer to new buyers only after they agree to remit a percentage of the transaction value to the artist.

Does a child with a cleft palate need plastic surgery? Or a woman who’s had a mastectomy? How about a fifth-grade boy who gets bullied for having big ears? Joshua Korman, a clinical professor of surgery, writes in Stanford magazine about what procedures are deemed medically necessary and who gets to decide.

Plastic Surgery: Who Needs It?

Something about ‘having work done’ makes us uncomfortable. It shouldn’t.

On the flow of war information; sleep tips; when you’ve got 100 years to live