The Governor Is In 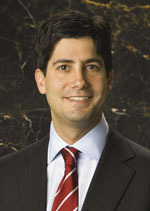 Kevin Warsh's Stanford buddies can hardly contain their mirth when they call the Federal Reserve and hear Warsh's assistants say, “The governor is on travel,” or “I will check with the governor.”

Warsh became a member of the Federal Reserve Board of Governors on February 24, 2006, when Ben S. Bernanke rose to be its 14th chairman after Alan Greenspan retired. Warsh was appointed to fill Bernanke's unexpired term, which ends January 31, 2018.

Warsh, 37, concedes that the honorific of governor and the idea of not having to look for work until he is at least 48 has “taken some getting used to.” This is not to say that Warsh was sitting very far away when he was appointed to the body that oversees the central banking system of the United States: he joined President Bush's staff in 2002 as an economic policy adviser, after a “surprise” call from the White House to his office at Morgan Stanley & Co. in New York City.

Warsh was in a weekly staff meeting in Morgan Stanley's headquarters in Times Square on 9-11. Like virtually all offices in the city that day, his was evacuated. He walked to his home uptown and awaited word of 3,700 Morgan Stanley colleagues who worked in the towers. Six died in the tragedy.

“That experience had some bearing on my interest in coming to Washington.” Warsh says. “So when the telephone call came, I was more open to it than I would have been otherwise.”

Warsh splits his time between the Federal Reserve building in Washington and meetings with finance and business leaders in New York. He works on capital-markets and financial-markets issues, trying to “understand what is happening on Wall Street and financial markets more broadly . . . deciphering what the Fed is telling us about growth and inflation,” he says.

Warsh, who grew up in Loudonville, N.Y., received his Harvard law degree in 1995 and completed coursework in market economics and debt capital markets at Harvard and MIT. At Stanford, he majored in public policy, was chair of the ASSU his senior year, and says he learned a valuable business skill: golf. He especially remembers working with David W. Brady at the Grad-uate School of Business and being mentor-ed by John F. Cogan, a senior fellow at the Hoover Institution.

Warsh is married to Jane Lauder, '95, a senior vice president at Clinique and daughter of cosmetics heir and longtime Republican contributor Ron Lauder—a fact that provided fodder for criticism on Warsh's appointment. Warsh says carping that he was too young, too inexperienced and too politically connected was blunted by “support from a broad range of folks” with whom he had worked in financial and capital markets. “I suspect this happens with all nominations. It is a tough political environment.”