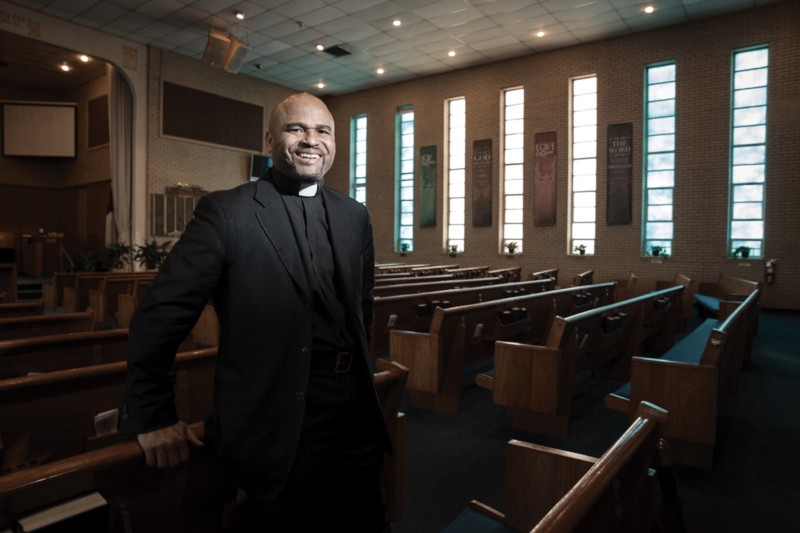 Ila Mae’s is a favorite soul food eatery among locals in Trenton, N.J. It’s also one of the Rev. Darrell Armstrong’s destinations to get fried chicken and a home-style breakfast. Inside, he’s greeted warmly by most of the people in the room, including the owner. “Well, hello, pastor,” says a lady sitting near the front window. Armstrong’s face lights up, and he reaches over to give her a hug.

“I’m going to see you this Sunday, right?”

This is the world of Armstrong, ’91, senior pastor of the historic Shiloh Baptist Church, who has become a critical figure in the revitalization of troubled neighborhoods on Trenton’s west side.

When the church was founded, in 1880, it was known as Berean, the First Colored Baptist Church in Trenton. Some of the most influential African-Americans in New Jersey called the neighborhood home, including, in the 1940s, David Dinkins, who would go on to become New York City’s first African-American mayor. More recently, the area’s been better known for crime—particularly its gang activity. In 2016, nine of Trenton’s 24 homicides occurred in the West Ward, where Shiloh is located.

“Our church is literally in between two of the four major crime hot spots in Trenton,” Armstrong says. The gangs—the Bloods and the Crips—are run like corporations, recruiting kids from up and down the East Coast and sending them to Los Angeles to learn the groups’ history, structure and expectations before they return to “franchise” the operations. “As a kid who grew up in South Central L.A. with friends who were original gangsters and gangbangers, I find it particularly uncanny that I would end up in a city like Trenton, 3,000 miles away from my home, 30 years later and still [be] dealing with Bloods and Crips.”

When Armstrong came to Shiloh in 2000, he became only its third pastor since 1904. Since his installation, he has taken special care to minister to the area’s at-risk youth—foster kids, gang members, the children of drug addicts and anyone else facing the specter of crime.

A.J. Smith and his brother Amerson are prime examples. Two of eight siblings, the brothers found themselves in the state’s foster care system when their mother, who was addicted to drugs, couldn’t care for them all. “There have been times where my parents were unable to take care of us and [Armstrong] had us stay with him for a couple of months,” says A.J., 23. “Without him, I don’t know where my life would be.” With Armstrong’s help, A.J. went on to graduate from high school and finish two years of study at Rowan College at Burlington County.

Amerson, 22, describes being mugged as “a part of growing up in Trenton.” He says Armstrong brought him “closer to religion and to God at a young age,” and has helped him out of tough situations. “He gives people hope. I’m a blessed man, and I understand that because of him.”

Ollie Green, a deacon of the church who joined the congregation in 1966, says Armstrong is unusual for his willingness to get out in the streets and “walk and talk” with gang members. “We are in the heart of the ghetto,” Green says. “A block away we have shootings. And he gets out there and works with those kids. We are one of the few churches that allow gang members to come and attend. A lot of churches will not allow a funeral of a gang member because they are scared. We say, ‘Come in.’ That’s big.”

To understand Armstrong’s passion for saving youth, one must know of his childhood. Armstrong says both he and his younger brother were abused by their mother’s multiple male companions. His mother was addicted to heroin and to crack cocaine and eventually was incarcerated. When one boyfriend placed Armstrong’s then 2-year-old brother in a tub of scalding water, burning two-thirds of his body, the boys were displaced into the foster care system.

“One of the darker moments growing up as an abused child was sitting in the back seat of the car one night and watching my mother being assaulted by her boyfriend and not knowing what to do,” Armstrong says. “I remember connecting my eyes with my mother’s eyes and the embarrassment she felt. I would never forget that look.”

Roberta Hawkins, Armstrong’s child services treatment worker in California (his third case worker by age 5), has now known Armstrong for more than 40 years. “I will never forget his first meeting. He was so attentive and protective of his younger brother and mother. I vowed to try my very best not to interfere with that loving family relationship,” she remembers. “He was always so far and beyond his age and so responsible.”

A relentless drive helped propel him to Stanford. Later in his youth, Hawkins recalls, he shared a small, three-bedroom house with seven other children. After a long bus ride home from school, he would do household chores before starting his college-prep homework. He had to turn out the lights before his homework was done, but he would get up in the middle of the night with a flashlight to complete it. “He had hardship but never complained,” Hawkins says.

He graduated with honors from high school and later earned a bachelor’s in public policy from Stanford, a master of divinity from Princeton Theological Seminary, and an advanced educational specialist degree in marriage and family therapy from The College of New Jersey. In 2015 he was awarded an honorary doctorate in divinity from Bible Believers Christian College and Seminary in Hawthorne, Calif. 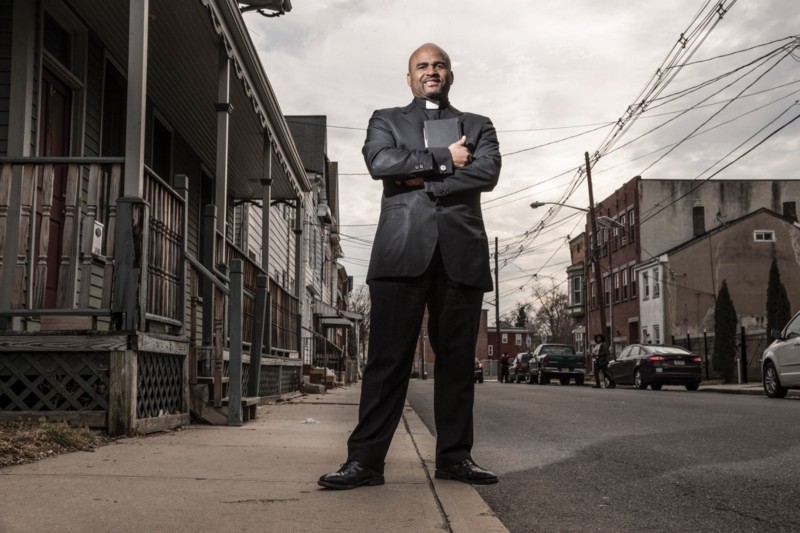 As Armstrong matriculated in life, he gained many admirers of his strong will to succeed. One of those admirers was the Rev. Floyd Thompkins, director of the Center for Innovation in Ministry at the San Francisco Theological Seminary. Thompkins served as the first African-American associate dean of Memorial Church and remembers fondly the days when Armstrong was a high-achieving student at Stanford, including time he spent working with youth in East Palo Alto.

“Even at Stanford it was clear to me that Darrell had a sense of the gospel calling him to do more than simply be educated and be professional,” Thompkins says.

Under Armstrong’s leadership, Shiloh has grown physically and spiritually. Its budget has more than tripled, to $1.8 million, as its membership has climbed to 2,200. Plans are afoot to build a $6 million, 36,000 square-foot family life center to serve residents in the city’s four wards. The project is expected to break ground later this year at the site of an abandoned paper factory. The center is one piece of a greater plan to provide jobs, job training, parenting and workforce development skills to needy families in Trenton.

In his own life, Armstrong has broken the cycle of poverty and drug addiction. He is married to Melanie Armstrong, an assistant attorney general in New Jersey’s attorney general’s office, and they are parents to daughter Amaris Kayla and son Daniel LaRue.

“Ultimately, I believe that when God’s spiritual power intersects with human agency, explosively powerful and transformative things can happen; that’s what we’re preaching here in New Jersey,” Armstrong says. “My journey . . . is premised on a biblical mantra that faith without works is dead. You’ll never get anywhere if you don’t try!”

Johann Calhoun is an editor for the Philadelphia Tribune and a special correspondent for Stanford.

What They Stood For

Fifty years ago, all-white Sigma Chi challenged the establishment by taking a pledge: We will choose whom we want.

‘They Are Somebody’s Children’

Florida’s juvenile justice system is troubled, as are the kids in its custody. That’s what keeps Dr. Shairi Turner going.