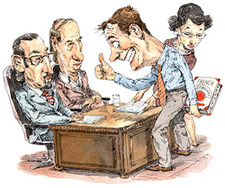 It was another one of those endless meetings. That it was in French made it only more insufferable. As my francophone colleagues blathered on, I made sure to make empathetic eye contact and nod my head appreciatively—even though at least half the conversation was as indecipherable to me as if it had been in a language spoken only by an undiscovered Amazonian tribe. Nevertheless, I was sure that my practiced bobble-heading would convince everyone present that I was not only fully absorbed in the discussion but also worth whatever outlandish consulting fee I was charging. That was until someone mentioned mise à jour.

Mise à jour, mise à jour. What the hell does mise à jour mean? Soup du jour throws me for no loops, but about mise à jour—suddenly the main item on the menu of discussion—I had no idea.

"Don't you agree, RO-bear, that the mise à jour should be our top priority?" the boss asked.

"Oui, oui. Bien sûr," I said, while casually trying to look up mise à jour on my mobile phone French/English dictionary, which appeared to have been last updated shortly before Robespierre was led to the guillotine.

When I think of the personal attributes that have led to whatever success I have had, faking it ranks very high on the list. Pretending to know what I'm talking about—or, more common, pretending that I understand what other people are talking about—is one of my great strengths. The times I have only just escaped discovery must number in the hundreds. And yet no one has ever looked me dead in the eye and said, "You have no idea what you're talking about, do you?"

Bluffing was a key ingredient in my premarital social life. Arriving at Stanford nearly 30 years ago, I scoped out my grad school classmates and invited one of the cutest over for a home-cooked dinner. Not only was she adorable, she was witty and smart, having studied math before going to work on Wall Street, where—she told me—she used to make models.

Despite having an undergraduate degree in economics, I had no idea why models were needed on Wall Street. As a boy, I had been a complete flop at them, forever gumming up my fingers with the little plastic pieces of whatever tank or aircraft carrier I was trying to assemble. As for applying the cellophane-like decals—there I was completely hopeless.

She, however, had been building models to Wall Street's satisfaction and, though we had only just met, already I could picture her assembling complicated plastic replicas of multiengine World War II bombers with our enthralled son. Or, rather, our twin sons. It was love.

Months later, in an introductory finance class, I realized to my great disappointment that the models she knew how to build were composed of dry facts and figures gleaned from SEC filings, and not bits from the boxes of the Revell company.

It was while at Stanford that I set my personal record—21 months—for pretending I knew when I had absolutely no clue. Much like mise à jour, the term that I didn't understand seemed to be fundamental to modern business and well established in everyone else's vocabulary.

It's been said there's nothing stupid about a question except not asking it. Experience in the real world has taught me otherwise. Indeed, asking about this particular geographical reference seemed akin to asking where the sun rose—and would certainly have had the admissions office reassessing my status.

Whenever a professor or classmate mentioned it, my hand did not bolt up to ask what they were talking about. In those days before the Internet and search engines, my research led nowhere. Maps were as clueless as I. Asking a librarian for help would have presented me with the same acute embarrassment I felt as a teenager asking a pharmacist for condoms.

Of course, just as I eventually learned what mise à jour means, I now know where to find Silicon Valley. After all, it's right there on Google Earth.

Robert L. Strauss, MA '84, MBA '84, lives in Madagascar. A mise à jour on his activities can be found at robertlstrauss.blogspot.com.

The Persecution of Daniel Lee

An Internet smear campaign nearly destroyed the South Korean star, but he fought back with the only weapon he had: the truth.