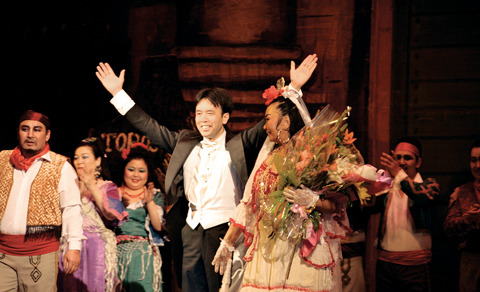 On a sunny morning in March, a hundred or so musicians and singers filed into the bright second floor rehearsal hall of Mongolia's State Academic Theater of Opera and Ballet clutching much-used instruments and hand-copied parts. As cast-iron music stands clattered, worn wooden chairs scraped varnished floorboards and Lady Gaga shouted "Look at me!" from a hidden cell phone, Stanford Symphony Orchestra conductor Jindong Cai greeted the group with his lone word of Mongolian: "Sanbano!"

Humoring him, a handful of musicians—many of them Soviet-trained and fluent in Russian, but not English—responded in kind and then began tuning their instruments. The "Maestro from Stanford" raised his baton, the room fell silent—and then resounded with the Act II finale of Georges Bizet's iconic opera Carmen.

Reverting to the international language of musicians, Cai coached "Pianissimo crescendo to piano—poco, ssshhhh . . . " The words and music coalesced until soon it mattered not that the lyrics were sung in vowel-heavy Mongolian rather than lyrical French. There in the rehearsal—and at the performance before a full house a few days later, with some operagoers dressed in traditional dels and others in Dior—music overcame cultural and language differences.

This multicultural collaboration between a Stanford professor and Mongolian artists was an outgrowth of the 2011 Stanford Pan-Asian Music Festival, which featured music from Mongolia. Over two weekends in February, Stanford student-musicians collaborated with several of Mongolia's top artists, including composer B. Sharav, throat-singing master Sengedorj and opera and ballet director Sergolene Bold. Audiences, included Stanford students, community members and, at the Bing Children's Concert, hundreds of preschoolers.

Such exchanges are of particular importance to Mongolia, which has a long and tortured history of cultural oppression. After Mongolia became the world's second Communist nation in 1921, its Soviet-backed government strove to eliminate much traditional culture and historic memory. Mongolian culture today is a vibrant mix of traditional and Western in which the country's 3.1 million citizens take growing pride.

"The relationship between Mongolia and the U.S. needs to go beyond economics," says Undraa Agvaanluvsan, a former fellow at Stanford's Center for International Security and Cooperation who is now an ambassador-at-large for Mongolia (and mother of Baljinnyam Dashdorj, '12). "To have a better understanding of each other, the best way is arts and culture and contacts."

In that vein, when Cai visits Ulan Bator in early July, it will be to conduct a new Mongolian ballet—called Attila the Hun.

A Shadowy Reminder of an Ugly Truth