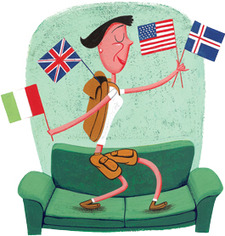 How's this for a "how I spent my summer vacation" story? Last year graduate student Bogdan State crashed on the couches of an American musician and his dumpster-diving roommates in Reykjavik, Iceland ("It's really expensive to live there"); a psychology professor in Milan, Italy; and a successful 27-year-old financier in Copenhagen ("We drank some scotch and listened to jazz"). It was all in the name of ethnographic research, of course. State is working with assistant professor of sociology Paolo Parigi to build a quantitative model of interpersonal trust. They plan to test it using data from CouchSurfing.org, an online community of travelers and hosts. The site, which launched in 2003, has close to 3 million members in more than 200 countries.

Here's how it works: Users create profiles of themselves and indicate whether they are willing to host visitors and what sort of accommodations they can offer. It doesn't have to be a couch, per se. Perhaps it's a cot in Copenhagen or a futon in Frankfurt, a hammock in Helsinki or a pallet in Prague. Would-be guests can search the profiles, read references and contact prospective hosts through the site. Hosts then review the requests and decide whom, if anyone, to invite to stay.

From a research perspective, the uniqueness of CouchSurfing.org data is the behavioral dimension. "Remember, these are actually people going somewhere else or hosting. It's not just a friendship online," says Parigi. In an average week, the site facilitates about 40,000 real-life introductions, 80 percent of which receive positive ratings from the parties involved. "It's quite a risky thing," State notes. "The payoff from a good interaction is very small, and the potential loss is huge. So the question is: Why in the world is this happening at all?"

The Stanford team is the first to explicitly study trust in the context of the CouchSurfing.org network. Their analysis is part of a broader research focus on "trust studies," organized under the aegis of the multidisciplinary Institute for Research in the Social Sciences (IRiSS) within the School of Humanities and Sciences. "We don't have a precise answer yet for how the organization manages to engineer this trust between strangers, but we hope to get to that answer," Parigi says. "We also hope to find something that can generalize outside of this particular community. There are several places in the world that could benefit from injection of trust."

Emotions are often implicated as triggers for gastrointestinal distress (e.g., "nervous stomach"), but mounting evidence suggests that causality may run in the other direction as well. A recent study by Stanford Medical School researchers found that, in laboratory rats at least, gastric irritation during the first few days of life may permanently alter the brain, making individuals more prone to anxiety and depression.

"The gut and the brain are hardwired together by the vagus nerve, which runs from the brain to the body's internal organs," says Pankaj Pasricha, a professor and chief of gastroenterology and hepatology, who was senior author of the study. Moreover, the gut has its own relatively independent nervous system, complete with senses and reflexes. (Among other things, the enteric nervous system is responsible for the sensation of "butterflies in the stomach.")

Pasricha and colleagues including Liansheng Liu, first author of the study, found that resting levels of stress hormones increased in the test animals. They were also more likely to display anxious or depressed behaviors than the control animals. The researchers noted that whereas blocking the animals' ability to perceive pain from their gut did not improve their behavior, inhibiting the activity of a stress hormone-releasing factor caused them to behave more normally.

Next, says Pasricha, "We'd like to know whether the vagus nerve is involved, and confirm what changes may occur in the brain. . . . Our hope is that this work will open another avenue for exploring, understanding and treating these very complex syndromes."

He shepherded Microsoft through its stormiest period and helped bring a World Series title to San Francisco. In both cases, says Bill Neukom, it was all about the team.