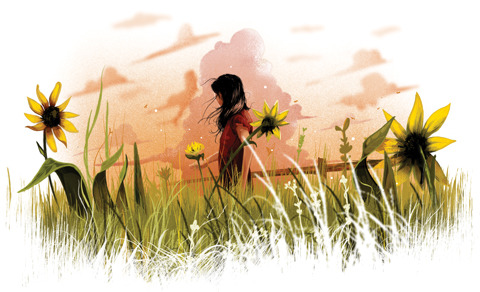 We stopped for gas in Nebraska, piled out of the chocolate brown van like a chain of circus monkeys. Playing cards, battered library books, a crumpled map tumbled out in our wake. The baby fell onto cement and skinned his knee, while gold stretched out around us, waving, lambent in the heat, bearing the anticipation of fire or something we could not dream up. We were tiny people, timid, our backs against the hot mud paint of the van. Our mother wandered off. We, barefoot California urchins, tangled hair, parents full of ideas, stared in disbelief at the gravid world. Hot wind. Hot, hot wind. A sky so bold and distended we couldn't breathe in. Everything possible saturated the air, eddying above this land. My father stood hunched in a filthy phone booth. My mother pulled a bottle from the Coke machine. When our courage mounted, we dashed to a scrap-wood fence before forever fields, climbed, then pulled the baby up. On top of that fence, hand-holding a tow-headed brother and a dusty sister, I saw distance everywhere, smelled lightning, dead animals, strong men running for their lives, young girls driving tractors, teenagers clinging to each other on motorcycles, winding far out dirt roads. I sensed families stuck in houses, injuring each other, over and over again. Scalloped clouds stretched thin across the overwhelming sky and my new nose opened to glinting flakes of wheat sheath, pungent in fine currents, the scent of sorrow and sex, days and days of boredom, repressed emotions, despair, someone's mama gone. Eleven years old on a fence in Nebraska, California kids, full of beaches, glamorous blonde mothers making art, fathers experimenting with sound and sexual partners. But for all I knew, Nebraska was the place where everything happened. You could smell it.

KIRSTEN JONES NEFF, '88, is an award-winning filmmaker and poet who lives in Marin County. "Nebraska" originally appeared in When the House is Quiet (Finishing Line Press, 2009).

My aunt's grace puts everything in perspective.