The Art of the Fling 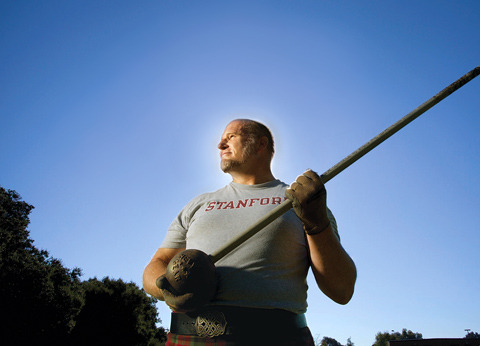 On a crisp autumn morning, Alan Hebert strides onto the Sand Hill athletic fields. He takes a deep breath and begins to swing a 16-pound Scottish hammer around in a circle—once, twice, three times—before flinging it high into the air. When the metal head thumps down, it leaves a big, muddy crater in the green grass.

Highland Games festivals held around the world celebrate Scottish and Celtic culture. The Games are best known for bagpipes, Scottish dancing and the caber toss—in which competitors throw tree trunks ranging from 14 to 20 feet tall. The other "heavy" events feature stones, weights or the Scottish hammer, a metal ball on the end of a long stick.

Hebert has found or made much of his own equipment, such as a stone he picked up by Stanford Avenue and a tree trunk he painted Cardinal red and white.

"We're throwing sticks and rocks," he says, smiling. "It isn't scientific." Hebert enjoys the sense of history he gets from the sport, and not just the connection to his Scottish ancestry. "San Francisco's Caledonian Club has hosted Games since 1866," he says, proudly. "They're the largest Games in North America."

But to Hebert, the most important part of throwing is the camaraderie. He's found everyone—even the champions—to be supportive and welcoming.

We must equip students with the ability to adapt to changing careers.