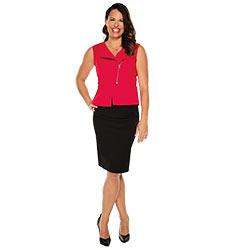 Jessica Mendoza never set out for a career in sports broadcasting, let alone the historic heights she now occupies—the first female member of ESPN’s marquee Sunday Night Baseball team. When the network first approached her about covering softball a decade ago, she questioned their judgment.

A live mike in front of this filter-free mouth? Maybe not a good idea.

But Mendoza, ’02, MA ’03, was intrigued. And from the moment she sat down in ESPN regional studios in Charlotte, N.C., to test herself on a taped game, she knew she’d found something as all-consuming as playing.

Two hours disappeared in an instant, she recalls. “I was like, ‘Can I do another one?’ When the red light goes on, there’s something about me, there’s no other place I’d rather be.”

It would take years for Mendoza to fully dedicate herself to her new craft. When she started at ESPN in 2007, her on-camera work at events like the Women’s College World Series and later from the sidelines of college football games still gave way to the priority dominating her year—playing the game that made her name.

A four-time first-team All-American, Mendoza is arguably the greatest hitter in Stanford softball history. Fourteen years after her last game for the Cardinal, she sits atop the record books for career home runs, hits, average and slugging percentage. After graduation came a long run with Team USA and two Olympic medals—gold in 2004 and silver in 2008.

Indeed, at 35, she’d “hands down” be going to Rio to play if only, of course, softball—along with baseball—hadn’t been booted from the Games, an ignominy no Olympic sport had suffered since polo got axed seven decades earlier.

The decision, by secret vote, took effect after the 2008 Games, but the sting lingered far longer. Mendoza remembers taking the field with her pro team, the USSSA Florida Pride, in the summer of 2012, looking at the former Olympians around her, and thinking they should all be 4,000 miles away at the London Olympics.

“I had a really tough time, especially just knowing we were supposed to be there and someone took that away from us,” she says. “It was just a weird feeling of, like, this game I am playing today, right now, should be in front of an audience much bigger.”

Without Olympic glory drawing her on, it became harder to ignore other career opportunities. After sitting out the 2013 season following the birth of her second son, she retired in 2014. “My eyes are watering but my heart is full,” she wrote in a message pinned to the top of her Twitter account.

She was ready for more, and so was ESPN. Mendoza began appearing on Baseball Tonight, the digest of the day’s games, breaking down mechanics with a mix of the expertise and charisma that had drawn ESPN’s attention in the first place.

Ramona Shelburne, ’01, MA ’01, her teammate at Stanford, remembers watching one night as Mendoza instinctively kicked off her heels to crouch into a batter’s stance during an on-air hitting demonstration—transforming in a moment from a talking head into a world-class hitter.

It was a spontaneous display of ability, credibility and flair, Shelburne says, and a rebuff to anyone doubting her credentials in the otherwise all-male arena. “She’s breaking the swing down and she does this vicious Jessica Mendoza swing,” she says. “If you are a guy watching that and you listen to what she said,” says Shelburne, also a journalist for ESPN, “you know she knows what she is talking about.”

In many ways, Mendoza has been prepping for such moments her whole life. A gifted natural athlete, Mendoza grew up in Southern California excelling in everything from tennis to track, an inheritance from her father, Gil, a multisport star who tried out for the Dodgers before playing linebacker for Fresno State.

But perhaps more important, her father was a longtime football and baseball coach, obsessed with honing talent through hard work and smart practice.  An early adopter of filming players as a coach, he began videotaping Jessica’s at-bats, as well as those of his younger daughter Alana, a future player at Oregon State, when the girls were 5 or 6.

For the first three years or so, he told Jessica not to swing. Instead she’d slap bunt her way to first, then steal second, her sprinter’s speed turning virtually every at-bat into a guaranteed double.

Then the summer when Jessica was 11 or 12, Gil hung a 60-pound punching bag on the porch, painted it with a strike zone, and let her loose on it. Jessica, he says, was incessant, practicing even during television commercials.

The first time she took a real swing in a game she ripped the ball into the Palmdale night. “I thought, ‘My God, I have been cheating this girl all this time,’ ” he says with a laugh. “And it never stopped from that point.”

The driving belief shaped by her father that she could always get better came with a flip side—that she wasn’t all that good. Shelburne recalls her friend doubtfully asking her a few days before the start of her freshman season if she thought she’d start.

But Mendoza’s sincere ignorance of her star power has fueled her success on all fronts, Shelburne says. She never coasts. “If you walk around with a big ego and a big ‘I’ve made it’ sticker on your head, you are not going to keep growing and pushing yourself,” she says. “The reason why she has continued to jump over every hurdle is because I don’t think she’s ever going to be satisfied. She doesn’t set boundaries for herself.”

Still, even Shelburne couldn’t have predicted just how quickly she’d clear the hurdles in 2015, beginning with the men’s College World Series in June, where she was the first woman in the booth. In August, she became ESPN’s first female analyst for a major league baseball game for a weekday contest between the Cardinals and Diamondbacks.

Just days later, she was bumped up to the Sunday Night team, after incumbent Curt Schilling, a former pitching ace, was suspended. On short order, she delivered a performance widely praised for poise, pace and perception. “Jessica Mendoza showed Sunday night that she belongs in ESPN’s regular rotation of baseball game analysts,” the New York Times wrote.

In October, she became the first woman to call a nationally televised playoff game—a distinction that came complete with the Hall of Fame securing her signed scorecard for enshrinement in Cooperstown. In the off-
season, her place on the Sunday Night crew was made permanent.

For all the attention, she is not the first woman to call major league baseball games. For decades, Suzyn Waldman has been doing color commentary on radio for Yankees games.

But Waldman, herself a fan of Mendoza, says Mendoza’s ascent to a nationally televised broadcast represents a leap for women in the booth, one made possible by the relatively recent developments of high-level women’s sports. You can’t dismiss Mendoza by throwing “How do you know?” at her, she says.

“She’s got the personality, she knows how to analyze, she’s delightful to watch, and she’s got the credibility,” Waldman adds. “She can analyze somebody’s swing as well as anybody.”

Still, Mendoza’s accomplishments aren’t a shield against criticisms, particularly on social media, that she lacks the baseball background, or the XY chromosome, to give the insights that are an analyst’s bread and butter. Mendoza notes that no one ever seems to take issue with the many men analyzing and coaching softball.

And if there are any gaps in her knowledge, she’s been eager to fill them, one reason why she spent the off-season poring over spreadsheets on every team, interviewing players and even taking pitching lessons. Earlier this year she was taking pitches from the San Francisco Giants hard-throwing righty Jeff Samardzija.

But it’s not all baseball. Mendoza continues to work playoff college softball games for ESPN and takes a deep interest in the game’s well-being. To her delight, she says all signs indicate softball will be reinstated for the Tokyo Games in 2020. “I’m calling the shot right now; that’s what’s going to happen.” But not soon enough to prevent history in the booth.