Up to the Task

Like a lot of kids who grew up in the 20th century, Kate Rubins dreamed of becoming an astronaut one day, and it was something she held on to as she got older. That’s why a few years ago, “one of my friends called me up and told me she saw an online job listing for astronaut applications,” Rubins says. It was a long shot, but she knew she couldn’t pass up the chance.

In 2009, Rubins, PhD ’06, learned she had been accepted into NASA’s 20th astronaut class. She left her lab at MIT, where she’d been studying dangerous viruses like Ebola, and packed her bags for Houston.

Now, after 4 1/2 years of general astronaut and mission-specific training, Rubins is taking off for her first stint on the International Space Station. Among the hundreds of scientific experiments she’ll be performing on board—including one from Stanford, about the effects of microgravity on heart stem cells—she’ll be the first person to perform DNA sequencing in space. Although the technology to decode DNA has become widely accessible in recent years, “this is the first time we’re going to have this capability onboard ISS,” Rubins says, adding that the experiments will demonstrate how microgravity affects the procedure. The results may improve our understanding of the human immune system and could even be used to develop life-detection technology for future space exploration.

Rubins is scheduled to launch with two other astronauts in early July, and will orbit Earth for between four and seven months.

Don't Give Me That! 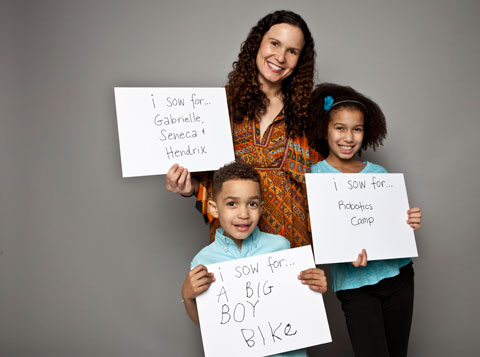 For her 9th birthday, Tanya Van Court’s daughter said she wanted an investment account and a bicycle. Instead, she received a make-your-own-gum kit, two weaving looms and a butterfly conservatory. It was an inciting moment for her mother, who realized then that our gift-giving process for children is broken. Instead of cultivating a mindset of goal-setting, saving and sharing, we feed the landfills. That’s why Van Court, ’93, MS  ’94, recently launched iSow Inc., an online platform that enables kids to set savings goals and raise money for them through a web profile they create. (The money changes hands through PayPal; both iSow and PayPal take a cut.) “The philosophy is to get young people to start to think about money in ways that are productive and healthy and good for them, but also good for our world,” says Van Court. She wants to create a movement, and she’s starting at home. Her three children—Gabrielle, 11, Hendrix, 6, and Maxwell, 6 months—each have iSow profiles. Hendrix, for one, is “sowing” for a bike, the Purple Feet Foundation and an investment account (just like his big sister). Oh, and he’s saving for Stanford, of course. 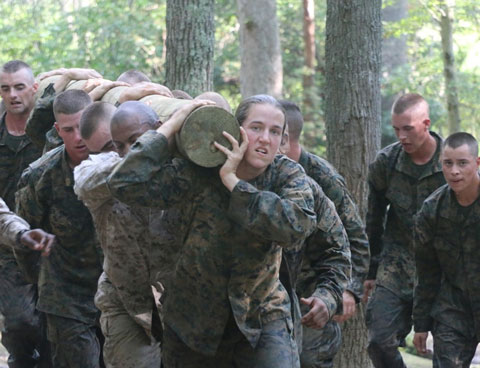 On June 12, the same day she graduated from Stanford, Daly Montgomery received her commission as a Marine Corps officer—an unusual feat for a Stanford woman. Her ceremony took place on the rugby field (she was president of the team), and she became a second lieutenant. In the audience was her longtime karate teacher, whom she credits with sparking her interest in the military. “He spoke very highly of service,” Montgomery says.

Though she started karate at 5, it wasn’t until eighth grade that the Dallas native solidified her dream to join the Marines. She first told her parents—a retired investment broker and an attorney—of her goal when she was in high school. “I think my mom saw it coming,” says Montgomery, ’16. “My dad was like, ‘What?’” Yet both were supportive, as they had been of all her pursuits. Stanford, it turns out, was her backup school. First choice was the U.S. Naval Academy, but she didn’t get in. Same story with a Navy ROTC scholarship and ROTC at Stanford. But her doggedness paid off: Montgomery was admitted to Officer Candidates School last summer. In October, she will start a six-month training program at the Marine Corps’ Basic School in Quantico, Va., where she’ll learn to lead a platoon on the ground. Then she’ll head to Pensacola, Fla., for flight training. 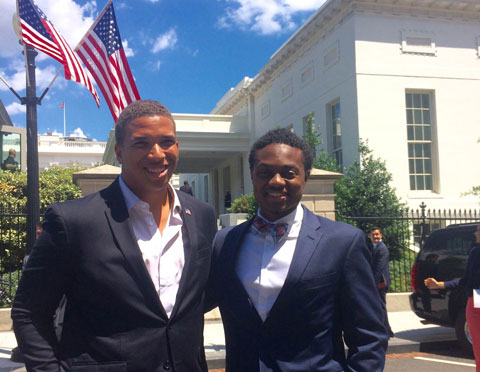 Former student body president John-Lancaster Finley and vice president Brandon Hill, both ’16, topped off their Stanford experience in June with a trip to the White House. As outgoing executives, they attended the National Campus Leadership Council’s 2016 Presidential Leadership Summit, a meeting of 181 student leaders from across the country at the White House and at the Embassy Row Hotel in Washington, D.C. On the agenda? A mix of student breakout sessions, speakers, panels and policy briefings touching on topics such as financial aid advocacy, campus sexual assault policy, mental health, and diversity and inclusion. “The biggest issues facing colleges today . . . all share a common theme of belonging at these institutions, and how students are cared for once they arrive,” Finley wrote in an email after the event. Added Hill: “Beyond the issues, there is also the question of tactics—what are the best practices to realizing change on those key points of concern . . . in an era of massive social activism and when you only have one year in office?” 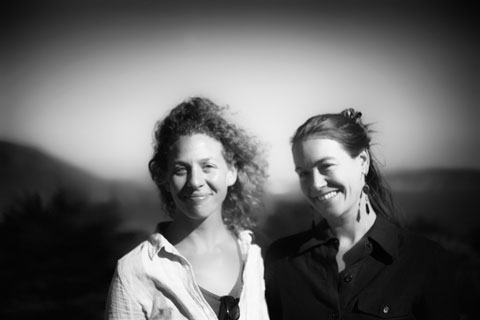 The seeds for the boundary-breaking theater troupe We Players sprouted at Stanford, when then-freshman Ava Roy, ’03, staged a performance of Romeo and Juliet that roamed campus, with the Montague-Capulet fight at Tresidder, marriage vows at Memorial Church and Juliet’s entombment near the Burghers of Calais. She and Lauren Dietrich Chavez, ’03, MA ’06, have teamed as co-producers to reprise Shakespeare’s play this summer at the Petaluma Adobe State Historic Park in Sonoma County, Calif., and in October at Villa Montalvo mansion, an arts center in Saratoga, Calif. Rush Rehm, PhD ’85, a Stanford professor of drama and classics, will play Friar Laurence, the character who agrees to wed the ill-fated couple. Roy, also the director, says that the play and the sites they’ve chosen raise questions of ownership and belonging. And the timing is right. “Personally,” Roy says, “I think Romeo and Juliet only happens because it’s in Italy in August.” Since 2008, We Players has collaborated with the National Park Service and California State Parks to create participatory performances in public spaces, such as Hamlet on Alcatraz and The Odyssey on Angel Island. The group hopes to stage performances in the National Parks of New York Harbor and Gateway National Recreation Area in the next couple of years.