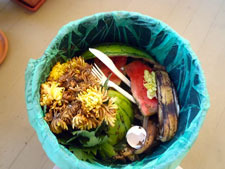 How degradable are the so-called "biodegradable" products?

The short answer is: It depends on the environment in which the biodegradable material is placed and what that material actually is. The term “biodegradable” means that a product can be broken down by naturally occurring microorganisms and turned into compounds found in nature. This is not the same as “compostable.” If something is compostable, in addition to being biodegradable, it has to break down at a rate comparable to yard trimmings or food scraps in a compost pile. And it must do so without leaving any toxic residues.

Now, there are many products labeled as biodegradable, from detergents to packaging materials to bags. I chose to focus on plastics, however, because in the past few years I have noticed how more and more disposable plates and cutlery made of plastic are labeled as "biodegradable" or "compostable." Are those products truly environmentally friendly, or is the label simply a marketing strategy?

Let’s start by looking into the degradation processes of regular versus biodegradable plastics. Regular plastic like PET (used, for example, for soda bottles) never biodegrades. It can degrade, meaning that when exposed to sunlight, moisture and oxygen, it will eventually turn into tiny pieces and even individual molecules. However, these are not naturally occurring molecules and are oftentimes toxic.

For a plastic to be called biodegradable (in the United States, standards are set by the American Society for Testing and Materials) 60 percent of it must be broken down within 180 days in a commercial composting facility. Do you see the catch? How many people who buy biodegradable plastic tableware for a party have access to a commercial composting facility? Currently there are about 200 such facilities across the United States, and the transportation of biodegradable plastics to those facilities is financially and logistically challenging.

So, can you compost them at home? No. The vast majority of them do not degrade in household compost piles, where the temperatures are too low. Put them in regular trash? In landfills, those plastics will not degrade either, because landfills lack the water and oxygen that the microorganisms involved in the breakdown process need. How about recycling? Not a good idea either. Biodegradable plastics are made of materials that are not compatible with regular plastics in the recycling process, and will only lower the quality of the product made of the recycled material.

No tableware is without impact—so much energy goes into producing ceramics, for example, that you would have to reuse a plate 50 times, and a coffee mug 18 times, to break even on their environmental impact compared with their biodegradable versions. Still, reusables are clearly preferable for long-term use. Paper coffee cups that have plastic linings cannot be recycled, and at Stanford 30,000 of them end up in the trash every day. Stanford dining halls use reusable tableware. But what if you want your lunch to go, or you are at an event where reusable tableware isn’t practical? At Stanford, whether cafés use tableware made of compostable or regular plastic is up to them. Compostable tableware costs more than that made of regular plastic but some cafés offer it by request. And of course, you can easily bring your own reusable cutlery and cups—at least—with you to most places where you’ll eat.

How biodegradable materials are made matters, too. The source materials are not always renewable. And even renewable source materials such as corn and potato starch must be made using land, water, energy and crops that otherwise could have been food. Is there a better way? According to Professor Craig Criddle and his research group in Stanford’s Environmental Engineering & Science Program, the answer is definitely yes.

As I was getting more and more pessimistic about the environmental benefits of so-called biodegradable plastics, I came across Professor Craig Criddle's research on bacteria that can produce biodegradable plastic from waste. Professor Criddle is a faculty member at the department of civil and environmental engineering at Stanford University; one of his projects focuses on bacteria that can utilize methane produced by landfills and wastewater treatment plants to make PHB (polyhydroxybutyrate). PHB is a biodegradable plastic with properties similar to polypropylene. Its durability and biodegradability make it suitable for use in medical implants. The bacteria produce it as a way to store energy the way humans use glycogen or fat. The bacteria need carbon sources such as corn or sugarcane to produce PHB. Using methane instead could be a neat solution to two big problems.

Methane is such a potent greenhouse gas that, as Professor Criddle puts it, "You can't let methane escape any more. Anywhere. Nowhere. We must eliminate methane emissions.” That makes methane-based PHB doubly beneficial, he says—as both a source of truly renewable, biodegradable plastic and an incentive to capture methane that would otherwise escape into our atmosphere. “If it pays enough to recover methane,” Criddle says, “people will recover it and then it won't be released."

Most of the infrastructure to make PHB from methane is already set up. Methane is already being captured at landfills and wastewater treatment plants, and burned either to prevent it going into the atmosphere or to produce heat and/or electricity. (Burning does release CO2 into the atmosphere, but CO2 is a less potent greenhouse gas than methane.) Instead, methane could simply be fed into the "reactor" containing the PHB-producing bacteria. To produce PHB from methane, energy and heat are also needed. How convenient that part of the methane could be burned to make electricity and heat! According to Professor Criddle, it would be sufficient to drive the process if 25 percent of the captured methane were burned for energy and heat production. The remaining 75 percent could be used as source material for the bacteria.

The infrastructure to degrade PHB already exists, too. PHB can be completely degraded and converted back to methane by anaerobic bacteria (bacteria that live in environments without oxygen), and there are anaerobic digesters designed to let these bacteria do their job. However, currently there is not enough PHB on the market to make a significant recycling stream. Therefore, the digesters are under capacity and PHB ends up in landfills, releasing methane into the atmosphere unless it is captured. If PHB were degraded in a digester, the recovered methane, together with "fresh" methane from landfills and wastewater treatment plants, could be used to feed the PHB-producing bacteria, closing the loop.

If this new technology could be commercialized, not only would it reduce the amount of methane released into the atmosphere, but also carbon would be sequestered in the PHB loop. Two former students of Professor Criddle have taken on this task and founded a start-up called Mango Materials. It was incorporated in 2010 and produces small, research-grade samples for customers interested in using methane-based PHB. According to Allison Pieja, director of technology, the team is looking into partnerships with methane-producing sites, such as agricultural facilities and landfills, and hopes to build the first commercial plant within two years. I wish them all the best, so we can reduce methane release and plastic waste as soon as possible!

Tamaki Bieri is a PhD candidate in Biology.