Shooting for the Moon 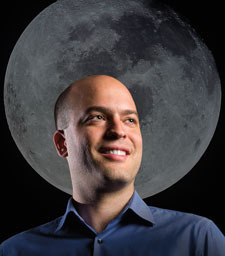 If there’s any overlap between planning space travel on a shoestring and searching for a cure for cancer, Yonatan Winetraub hasn’t discovered it. But his pursuit of both makes one thing clear: Winetraub likes to climb life’s big mountains.

The 29-year-old doctoral student in biophysics spends much of his time at Stanford on research geared toward understanding how cancer tricks the body into keeping its malignancies stocked with oxygen and nutrition. Winetraub also remains deeply engaged in SpaceIL, the Israeli nonprofit he co-founded six years ago that has an inside track on becoming the first private agency to land a spacecraft on the moon.

SpaceIL is one of 16 finalists for the Google Lunar XPrize, which promises $20 million to the first group able to reach the moon and fulfill two basic criteria: travel 500 meters, and transmit back video and photos. And it’s one of just two teams with concrete launch plans.

Next year, the group’s dishwasher-size creation is set to hitch a ride aboard a LunarX rocket. After releasing its other payloads, the rocket’s capsule will give SpaceIL a boost toward the next challenge—snagging the moon’s gravitational pull.

Then comes the agonizing part. Hurtling 2 kilometers per second in an airless environment where parachutes are useless, the spacecraft will need its jets to come to a controlled rest on the lunar soil. And to do so with no help from ground control, which will be too far away to offer input in real time. “This is going to be a horrible 10 or 15 minutes,” Winetraub says.

Winetraub first began planning a moonshot after hearing about the Lunar XPrize during a visit to NASA/Ames in 2009 while a student at the International Space University. But it was only a year later after meeting fellow engineers Kfir Damari and Yariv Bash that things began to take off.

They met in a bar outside Tel Aviv, brainstorming ideas on a napkin before rushing to draw up plans and raise the $50,000 entry fee in time for the deadline, about a month away.

The idea quickly amassed the support of scores of volunteers and, in time, the financial backing of Israeli philanthropists, industry and government. The funding allowed the founders to eventually hire professional leadership and take a less hands-on approach.

Despite the big prize, there’s no chance of a financial return on the investment. Even if SpaceIL wins, it won’t recoup half its $50 million budget. But other laurels are spurring them on, not least Israeli national pride and the excitement the project has stirred for the country’s engineering and science education.

Even if another group gets there first, Winetraub sees reason for celebration. The real competition is the laws of physics. He marvels at what the Apollo missions accomplished with so much less computer power. The more teams that succeed, the greater likelihood such trips will become commonplace.

“It would mean we are beginning an age and an era where you actually go to the moon and it’s not considered something incredible,” he says.