One Last Shot at Gold

The best player we’ve ever had returns to a record fifth Games.

This summer in Rio, Tony Azevedo will make history just strapping on his Team USA cap and jumping into the pool. No American man has appeared in five Olympics in water polo, a grueling game famed for the hidden ferocity of its underwater battles.

Of course, the 34-year-old American captain is after more than a participation prize. His goal is the same as it has been since he was a 14-year-old ball boy at the 1996 Olympics, watching the triumphant Spaniards tearfully celebrate with their fans, a memory that still evokes chills for him. He wants to win it all.

“What kept me pushing myself to the maximum year after year is that I want to be the first [U.S.] five-time water polo player with a GOLD MEDAL,” Azevedo, ’04, said in an email.

Azevedo, who won water polo’s equivalent of the Heisman Trophy four years running at Stanford, isn’t the only old hand among the dozens of Farm-affiliated athletes headed to Brazil this summer. Like Azevedo, beach volleyball legend Kerri Walsh, ’00, will be at her fifth Games, burnishing a résumé already gleaming with gold.

But probably not even Walsh will feel as at home this Olympics as Azevedo, who was born in Rio (his family moved to Southern California when he was a baby) and who has played professionally in São Paulo the past three years. (“Finally all the Portuguese courses at Stanford paid off,” he says.) His father, Ricardo Azevedo, a former star for the Brazilian water polo team, will be at the Games, too, coaching the Chinese women.

And while connecting with Brazilian cousins, culture and cuisine is great, he says, what has made the lead-up to these Games most special is that they’re the first since he and his wife, Sara née Proal, ’04, became parents. Their son, Cruz, is 3, and they have another child on the way. Because of concerns about the Zika virus, that may mean they watch at a distance. 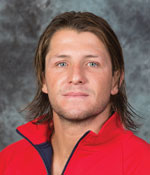 None of that distracts from Azevedo’s focus on the prize in the pool. The American men have never won Olympic gold in water polo. In his tenure with the team, Azevedo came closest to helping end that streak in 2008, when the United States, led by his three goals, upset Serbia en route to silver.

From his Olympic debut as an 18-year-old prodigy who finished fourth in scoring, Azevedo has been a goal machine. But this year, he says, his role will be more as a leader and a facilitator, though some aren’t buying it. Former U.S. Olympic Coach Richard Corso, who has known Azevedo since the star was a child, says Azevedo might prefer that people think he has slowed down, but Corso still sees a player at the height of his powers. “I don’t think he has lost a stroke,” says Corso, who now coaches the women’s team at UC-Berkeley.

Azevedo’s prominence in American water polo history is unmatched, Corso says. “He’s the best player we’ve ever had, hands down.” Azevedo will do his best this summer to add another line to that legacy.