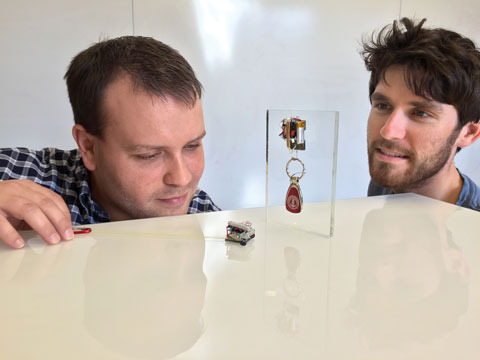 THE LITTLE BOT THAT COULD: Christensen and fellow researcher Elliot Hawkes with a microtug. Photo: Greg Campbell/BDML

THE LITTLE BOT THAT COULD: Christensen and fellow researcher Elliot Hawkes with a microtug. Photo: Greg Campbell/BDML

Behold the ant. Mighty, industrious and seemingly inexhaustible, this insect marvel has fascinated scientists for generations. Now researchers at Stanford have managed to mimic ants’ superpowers by developing tiny robots capable of moving objects thousands of times their weight.

Mechanical engineering PhD candidate David Christensen, working with a team in the Biomimetics and Dexterous Manipulation Laboratory, built a 3.5-ounce “microtug” about the size of a matchbox that uses sticky rubber “feet”—inspired by the adhesive properties of geckos—to pull heavy loads. In a video demonstrating the robot’s capabilities, a microtug slowly but gradually moves a 45-pound weight across a countertop, the equivalent, Christensen says, of a human dragging a blue whale.

Recently, the researchers have applied the efficiency observed in ants’ collaborations to synchronize the movements of several robots to accomplish even greater feats. In one experiment, six microtugs pulled a Chevy weighing almost 2 tons across a concrete floor.

In a paper describing the results, Christensen and fellow researchers Srinivasan Suresh and Katie Hahm and mechanical engineering professor Mark Cutkosky note that the extraordinary performances produced in their study “suggest a design procedure for robot teams.”

Fearless and fervid, Stanford's first art professor left his imprint on California's peaks and on lithography.