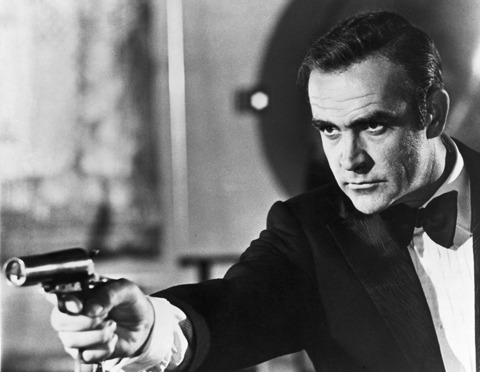 With that, the screen goes black, the orchestra kicks in, and we witness the birth of something historic: the Bond song.

Moviegoers in 1964 might’ve been perplexed as Shirley Bassey belted out the title track over a surreal credit sequence. But today, no Bond film would feel complete without one of the distinctive openings.

Stanford professors Adrian Daub and Charles Kronengold, experts in cultural studies and musicology, set out to understand what Kronengold describes as “this very strange musical phenomenon”—a canon of theme songs—“that basically doesn’t change for fifty years.” The James Bond Songs, the resulting book published in September, puts the songs in the context of their times and asks why modern performers strive to replicate “this thing from 1964 that already was kind of outdated then.”

While the tunes have given the occasional nod to disco, New Wave or EDM, for the most part they exist in their own unchanging world of cheesy strings and blaring brass, throwbacks to an imaginary, “classier” version of the past. The professors figure that’s part of what makes the songs crucial to the James Bond world, however. As Daub explains, the songs seem to keep viewers from fixating on questions like, “Why hasn’t [Bond] aged? Why hasn’t his relationship with women changed at all? Is that weird?”

It came as somewhat of a surprise, then, that the newest Bond theme, Sam Smith’s “Writing’s on the Wall,” took such a different tack: no rhythm section, a vulnerable falsetto, and a chorus—usually the grandest part—stripped away to piano and voice.

“In some ways [the simplicity] makes it more interesting,” says Kronengold. “It makes it sort of subversive of a lot of Bond song conventions.”