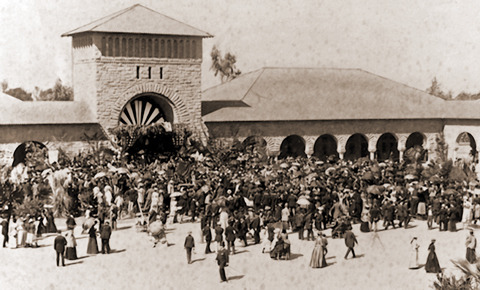 A yearlong celebration of Stanford’s 125th anniversary began this fall with symposia, activities and a website dedicated to university history.

Stanford officially turns 125 on October 1, 2016, when the commemoration will conclude. Between now and then, says Nicole Sunahara, director of special initiatives in the Office of Public Affairs, the milestone offers a chance “to document the university’s transformative impact on the world. . . .”

“A 125th anniversary doesn’t carry quite the magnitude of a centennial, but it can have its own spirit and tone,” notes Sunahara. “As we did in 1991, we’ll celebrate the university’s excellences in areas ranging from academics to research to athletics to student life. But our time frame—fall 2015 to fall 2016—is shorter than the centennial [celebration], which extended several years.”

Details about events and plans for the anniversary are located here.