A drop in majors sparks revamp and a campaign.

Undeclared undergraduates needn’t feel forlorn: Political science wants YOU. It’s looking for more than a few good students who are interested in a globally relevant education that readies them for everything from an academic career to national security work. And the department’s recruiting mission is headlined with a revamped major that offers students a better opportunity for tackling “big problems—and social issues,” as noted by associate professor Justin Grimmer.

New enlistments are earnestly sought in the wake of a notable decline in poli-sci majors over the last four years, from 74 in the 2010-11 academic year to 61 in 2013-14 to 47 in 2014-15. Grimmer, as the department’s new director of undergraduate studies, says an assortment of factors had deterred students, including how difficult it was to mesh all the requirements for the major with everything else students wanted in their course schedules. But it wasn’t just a navigational issue. Prospective majors “didn’t see the coherence in the classes as we saw it,” Grimmer adds. 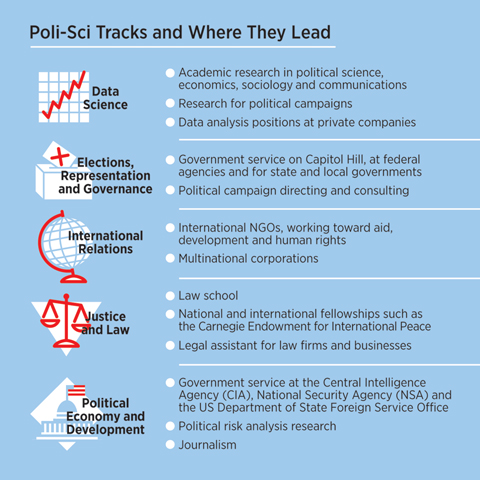 Enter a program based on five “tracks” of thematically grouped courses. (See graphic.) Briana Roberson, a junior, was the first student persuaded to commit to the revised major. Although there was some lighthearted banter about how she deserved a plaque just for taking the plunge, her motivation was rooted in the sober pragmatism of her choice.

She had previously been “a little reluctant” to declare for political science because of “its broad focus on theory, political research and data, statistics, etc.” The new track-based system, however, made the decision easy. “I naturally chose the justice and law track because it consisted of specific courses that focused on my interest of becoming a lawyer who concentrates on social justice.” Roberson is also considering a minor in ethics in society (open to students in any department), a logical pairing with her justice and law concentration, and poli-sci classes such as Political Freedom: Rights, Justice, and Democracy in the Western Tradition.

Sarah Sadlier, who is juggling multiple majors including political science, was able to switch to the new system even though she’s a senior, with international relations as her primary track. One advantage was being able to substitute the department’s new introductory course, The Science of Politics, for some other requirements she had yet to satisfy. The primary innovation in the course is its breadth—“an introduction to the entire field instead of a subfield,” says Grimmer—as opposed to previous introductory classes with narrower themes. And Sadlier says the portion devoted to data science (which can be a full track as well) will help her with her thesis on Brazil’s relationship with the United States.

As freshmen were arriving, Grimmer and Stephanie Burbank, the department’s undergraduate program adviser, were planning informational visits to nine dining halls. The goal? A few new majors per meal.