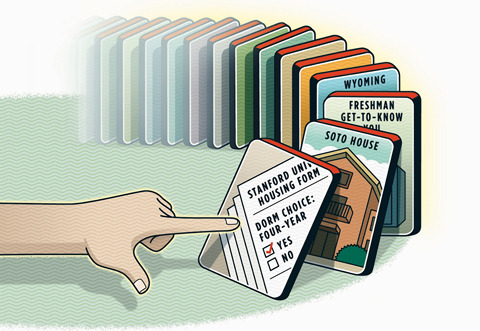 In our family room, collapse into my usual chair, newly designated by me even though our empty nest has more vacant chairs than ever before. Sitting adjacent, deep in with the New York Times crossword, is my husband, Mr. Wyoming.

We met because of one mischecked box on one form. Serendipity on a pencil tip, and a grounding reminder that what’s meant to be often waits on the far side of our missteps.

My conversations with the ResEd office went something like this:

“Because you checked the box indicating you wanted to be in a four-year dorm if the majority of students in your freshman seminar wanted to be.”

“But I want to be in a freshman dorm. How can I get into one?”

“Pay more attention the next time you fill out a form.”

Driving up to orientation with a good friend from my Los Angeles high school, I strained to conceal my envy as she blabbered on about her freshman dorm. Upon move-in, however, things started to look up.

My room in Soto, a four-year dorm back then, faced the only bathroom on a 30-girl floor. At peak traffic times, bathrobed figures bearing cosmetic cases stoppered our doorway. So friends weren’t hard to come by. In addition, my roommate was one of the nicest, most beautiful girls in our class. Froshbook-wielding boys flocked to our door, and when my roommate was out, that left me with social opportunity.

Most important, I met my future husband, also a freshman, that first week at a meet-and-greet in the lounge. Matter-of-fact Wyoming proved to be the antidote to an unrealized weariness with L.A. gloss. I was transfixed.

As it turned out, I loved Soto; still do. It’s still the first place I drive by when I’m on campus. It was there that I was in my first play, carried on during the great snowfall of ’76, and belted out earnest renditions of Carole King songs into hairbrushes.

Even so, pangs of jealousy occasionally resurface. Take mini-reunion night at our 25th. Merrymakers flocked toward tables with placards bearing the names of freshman dorms. I clung to the Cliveden table with my Stanford-in-Britain friends, trying not to fixate on the heaving mass in one corner. It was Branner, of course, the freshman dorm of our era.

But reunions come and go, and I’m back to our family room of two. Just across from me, making crossword progress, is Wyoming rock to my Pacific waves, left brain to my right, successful form-completer to the ad hoc-er.

Alison Carpenter Davis, ’79, and Mr. Wyoming live not far from where they met.