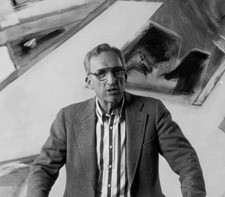 Lawyers aren’t generally linked to the art world, except perhaps as collectors, but John Henry Merryman, a Stanford law professor for 62 years, is a shining exception. Credited with launching the first course on art and the law, he combined an expertise in comparative and cultural property law with his love of modern art.

Merryman died on August 3 at his home in Menlo Park. He was 95.

After graduating from the University of Portland, Merryman earned a master’s degree in chemistry from Notre Dame. While teaching there, he pursued his JD and later obtained an LLM and JSD from NYU, where he had been offered a teaching fellowship. With five degrees in hand, Merryman was recruited to teach law at Santa Clara University.

In April 1953, as a result of violating the university’s prohibition against “anything contrary to Catholic doctrine and morals” by marrying a divorcée, Nancy Edwards, ’70, Merryman was fired. That same week, he joined the law faculty at Stanford. Carl Spaeth, dean of the Law School at the time, sent Merryman to Italy to study its civil law system. He also studied the legal systems in Greece, Germany and South America and published The Civil Law Tradition: An Introduction to the Legal Systems of Western Europe and Latin America.

Merryman and his wife traveled extensively, collecting modern art. When he returned to Stanford, he had lunch with professor Albert Elsen, and together they devised the first Art and Law class, which they offered in 1971. Merryman restricted enrollment to equal numbers of law students, art history graduate students and students in the Graduate School of Business for a class designed to teach them about tax, copyright, contracts, cultural property, ethics and other legal issues related to buying and selling art.

M. Elizabeth Magill, the current dean of Stanford Law School, said, “John Merryman was a giant in several fields—comparative law and the field he helped create, art and the law. He was a devoted teacher and mentor to his students. He taught his last class, Stolen Art, only a couple of months ago and helped launch the careers of many of our graduates who work at the intersection of the arts and the law.”

In the 1980s, Merryman was named to a two-person committee charged with finding sculptures to enhance the Stanford campus. In honor of his 80th birthday, The Sieve of Eratosthenes, a 6-ton sculpture by artist Mark di Suvero, was donated to Stanford to celebrate “a great teacher and friend of art.” In 2004, he received the American Society of Comparative Law’s Lifetime Achievement Award.

Merryman’s wife, Nancy, passed away in 2013. He is survived by his stepchildren, Leonard, Samuel and Bruce Edwards; four step-grandchildren; and five step-great-grandchildren.

I'm Going As Fast As I Can