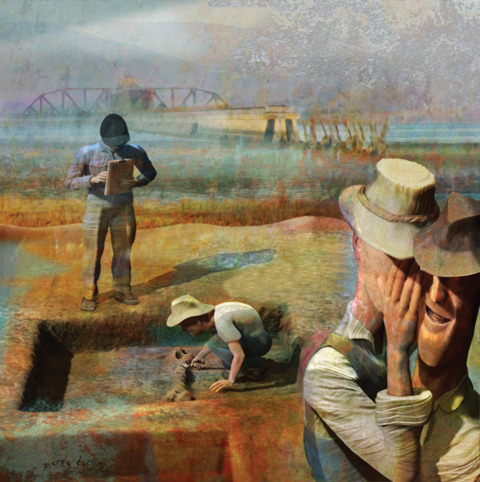 Five feet down, embedded in the hardpan of a cramped pit, the ersatz archaeologists had discovered the tip of a mystery. It looked like ivory, perhaps a huge tooth or a tusk.

Painstaking digging and sifting in the spring of 1969 appeared to have finally paid off. The “find” was right in Stanford’s backyard—the bay flats of Redwood City. The wide-open, windblown land had been selected for a dig by Stanford anthropology professor Bert Gerow.

The place was deserted, hot and dusty despite the winter rains. Other than occasional Southern Pacific freight trains trundling to and across the Dumbarton Drawbridge, it was eerily quiet—peaceful, even. A community of Native Americans had lived here, maybe even thrived, centuries ago. (By 2015, gleaming baby skyscrapers had sprouted from the flats.)

Like most premeditated crimes, it was an involved undertaking. We were never caught.

But I’m getting ahead of myself. First, a bit more background. This dig—part of a course that I’ll call Archaeology 101, since after 46 years I don’t recall the actual name—was required for a bachelor’s degree in anthropology, my major. Will Kendall, my pit partner, was a history major and a future member of the U.S. Foreign Service. He signed up for “adventure,” or so he said at the time.

With 12 students in the class, Professor Gerow split us into two-person teams that staked out 6-foot squares—the pits, or digs. Digging and sifting began at 8:30 a.m. every Saturday and lasted all day. Actually, “digging” is too exuberant a term for the hardscrabble, hand-spading travail we endured from April to June.

Oblivious to the sun and blissfully innocent of the Friday-night hangovers that bedeviled Will and me, our eager neighbors in the next pit seemed giddy with the prospect of uncovering ancient treasures buried under the tough-as-nails dirt. They dug with the verve of Indiana Jones.

As the Saturdays wore on, the intensity of the heat bore down. The dig was proving unrewarding. Artifacts amounted to mortars and pestles, plus a plethora of long, thin structures akin to turkey wishbone halves. These popped up in everyone’s pits with regularity. Professor Gerow, a genial man with a professorial head of silver hair, informed us that these strange things were “otter penis bones.” Who woulda thunk!

Going back nearly a half-century to an exciting mystery uncovered in the neighbors’ pit, I’m ready to come clean. Perpetrating the Stanford version of Piltdown man—what many regard as the greatest scientific hoax
of all time—had been simmering in our minds for most of that spring quarter of interminable Saturdays.

Recently, I consulted with Will, and after burying our fears that Stanford would revoke our 1970 diplomas, we would like to make the following confession:

We buried a fake “find” in our neighbors’ pit. Like most premeditated crimes, it was an involved undertaking. We were never caught.

For us, planting something in the adjoining pit seemed a sure way to create sorely missing excitement. The week before, we’d found a country meat market on El Camino Real, and for 20 cents (remember, this was 1969) we had bought a beef haunch or hock, the largest bone they had.

To ensure that no scraps of meat would betray us, we commandeered a roasting pan from Will’s fraternity, and added water, dirt and the bone. Presto! Twenty-four hours in the oven and out came a burned-clean bone, as smooth as ivory.

With the bone still warm, we headed to the pits Friday night and buried it. We packed the earth down hard so it would appear that the “artifact” had been lodged there since mastodon times. Bright and early the next morning, back at the pits, Will and I set to work and waited.

Sure enough, midmorning a whoop came from the next pit. The eureka moment had arrived. “Professor Gerow, come quick!” Following protocol, our neighbors began the meticulous process of gently digging out, diagramming and documenting the find. All the while they conjured up theories for what they had discovered. “Could it be remains of a saber-toothed tiger . . . maybe a giant sloth?” The possibilities were as limitless as the imagination. Holed up deep in our pit, Will and I struggled to contain ourselves.

An hour later, the hock was liberated from its overnight tomb. Speculation ended abruptly. Professor Gerow made his own find: a tiny strand of sinew still clinging to the bone! Before suspicion for the now-obvious hoax could be cast on the true perps, the professor unwittingly deflected it.

He laid the blame on a fellow anthropology professor.

To paraphrase Professor Gerow: “At the department cocktail party last week, I was grousing about the abysmal results from this dig. My colleague Professor [name withheld] threatened right then and there to plant an artifact in our dig.”

And just like that, we were in the clear. No one was any the wiser, until now. As Paul Harvey used to say, “Now you know the rest of the story.”

Chuck Fulkerson, ’70, is a writer and an illustrator, and has authored or co-authored books on trains and Native Americans. He was copy chief at Reader’s Digest for many years and lives in Newtown, Conn., with his boxer mutt, Elmer.