Koloikeao Anthony grew up in a family of storytellers on the east side of O‘ahu. His paternal grandmother is a professor of Hawaiian language, genealogy and mythology at the University of Hawai‘i. His father is a filmmaker. “I’ve been encouraged to tell the stories of the place that I come from, but in my own way,” the Stanford junior says.

It wasn’t until he got to Stanford that he saw an avenue to do so. He was spending time at the McMurtry Building, home of the art and art history department, where he would work on art projects, such as printmaking, or just grind away on essays (he’s an English major). It became a place where he felt free to do his own thing. By 2020, he had launched Poi Dawg, a brand based on one of his high school graffiti tags, through which he sells T-shirts and stickers he has designed. In Hawai‘i,  a poi dog is a mutt. As a person of multiethnic heritage, Anthony says, “I really felt akin to that kind of thinking . . . [Poi Dawg] became about identifying and being OK with where we were.”

Last summer, he worked at well-known aloha shirt company Sig Zane Designs. By the end of the summer, he had designed two shirts for release, including one (below, black) that has since sold out. “It’s always been a dream of mine to work for them. I realized I did one of the things on my bucket list at 20 years old—I can do way more.”

“Art makes me a better person–being able to express myself without any friction from anything else.” 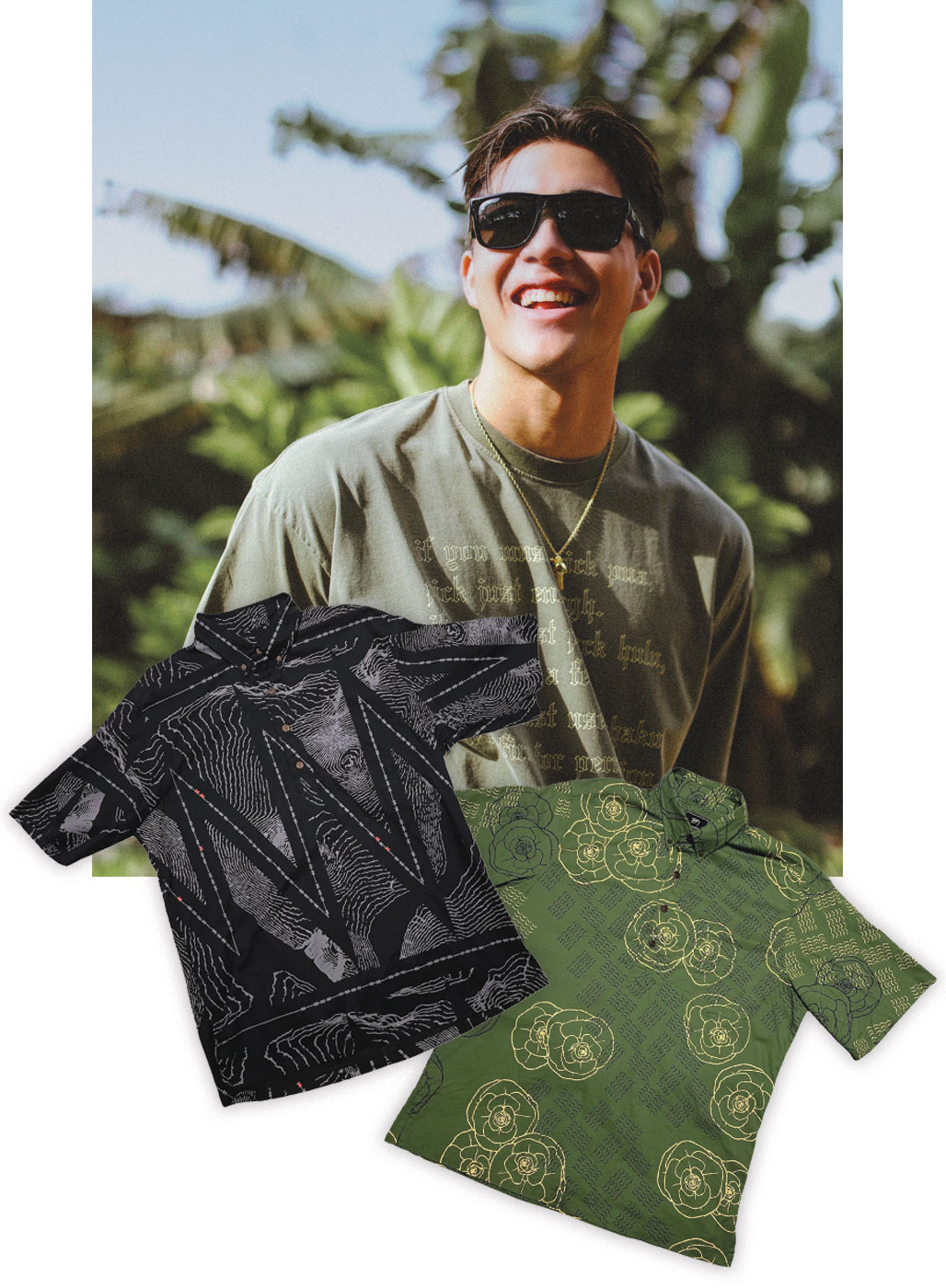 “I grew up surrounded by people who were making sure that I was involved in my culture. I went to Hawaiian immersion preschool and elementary up until sixth grade, so I really didn’t learn English—to write English sentences—until I was in the fifth grade.

“I started sailing at a really young age. My dad started sailing on this Hawaiian voyaging canoe called Hōkūle‘a, and they went all around the world in 2015. But before that, every Thursday we would sail to Diamond Head and back. I became very comfortable in the water and also got to participate in something that was very culturally grounding, even though it was just fun, and I didn’t realize how much I had taken away from those experiences until much later.

“I really like working on cars, like my truck. It sounds really dumb, but being able to diagnose what is wrong with the car is, to me, one of the cooler skills that you can have, because it’s really hard to do since you can’t see inside of it and it can’t talk to you about what’s going on.

Read All About It

What a data deep dive, a Pulitzer and a bouncy ball can teach us about journalism’s rekindling.