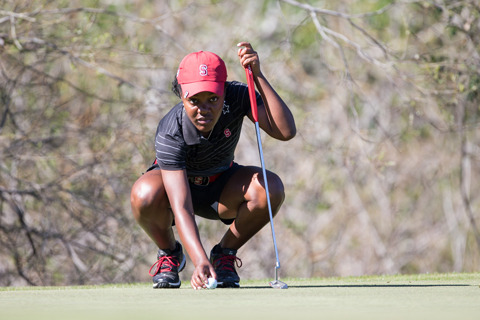 PRECOCIOUS: Stackhouse has been winning tournaments since she was 6. Photo: Casey Valentine/Isiphotos.com

PRECOCIOUS: Stackhouse has been winning tournaments since she was 6. Photo: Casey Valentine/Isiphotos.com

Mariah Stackhouse has never been known to shrink from the spotlight. Not when students and faculty flocked to her gallery to watch her complete the best round in the history of women’s collegiate golf—a 10-under-par 61 in her first tournament at the Stanford Golf Course as a freshman. Not when she was asked to give a speech introducing former Secretary of State Condoleezza Rice to a packed banquet hall in 2014. And not when the Cardinal’s season depended on her overcoming a two-stroke deficit with two holes to play against Baylor at the NCAA championships last May.

Before that memorable title tournament a year ago, Stackhouse’s junior season had been a relative letdown. She had earned first-team All-America honors in each of her first two years at Stanford and led the U.S. Curtis Cup team to victory in the summer of 2014, but she had no individual wins during her junior year and had dropped down to the All-America honorable mention list. For that matter, she hadn’t played all that well in her final match-play duel with Baylor’s Hayley Davis in the national championship match. After Davis hit a heroic shot to win the 16th hole and go up two, Stanford’s chances for victory appeared slim. But then, says Stackhouse, she felt “a light switch go on in my head. I realized this was a really cool position to be in; it was an opportunity to prove I could make this happen.”

Stackhouse birdied the 17th hole to pull within one. On the final hole of regulation play, she stood over a potentially match-tying birdie putt while her teammates lined the back of the green, barely breathing. “All of us agreed we wouldn’t want anyone but Mariah in that situation,” says senior All-American Lauren Kim. “It always just seems to work out.”

Stackhouse calmly sank that putt and then won the first hole of extra play with a par, delivering Stanford its first women’s golf championship. She later described those last three pressurized holes as “the most fun I’ve ever had on a golf course.”

“The bigger the stage, the more likely Mariah is to perform,” says Stanford head coach Anne Walker. “She can summon a shot. It’s overused, but she has the ‘it’ factor. So few people have that.”

Stackhouse doesn’t gravitate to center stage simply because she is, as her mom, Sharon, teased her when she was a kid growing up in Riverdale, Ga., “a little ham.” She has prepared tirelessly for big moments. Her golf game, which she has been honing since she was 5, is well-rounded and stress-tested. “I’ve had a lot of pressure-filled moments that have given me the experience to handle the next one,” she says. “So when I get in those situations, I’m excited because I know I’m not going to mess up. It doesn’t mean that I will win in those situations every time, but I know that I can win. That allows you to play freely.”

Although golf has been her primary platform, public speaking has also been part of Stackhouse’s life since she was a preschooler. By the time she was 2 she could recite the Gettysburg Address, a skill her preschool exploited by trotting her out to deliver the speech whenever prospective parents dropped by. Soon she was winning oratorical competitions at her church.

Two was also the age when she started tagging along with her father, Ken, to the golf course, though her main interests at the time were being with him and chasing ducks. Eventually Ken cut down some clubs for her, and at age 6 she entered her first tournament—against 9-year-olds who towered over her. To calm her nerves, Ken told her the story of David and Goliath and started a prematch routine she continues to this day: On her ball he inscribed a big M for Mariah and a little d for David. “This was a little guy who did big things,” Ken told her. “If he could do it, you can do it, too.” 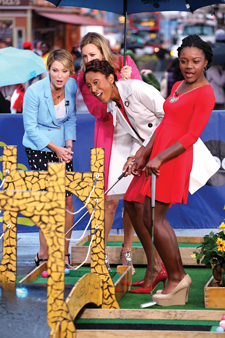 NEXT CAREER: Stackhouse charmed the GMA co-hosts during an appearance on the show last spring. (Photo: Fred Lee/ABC via Getty Images)

Stackhouse tied for first in that tournament. By the time Ken hired Atlanta Athletic Club instructor Chan Reeves to coach her three years later, she had won 48 more. “Mariah was always ahead of everyone else her age, in maturity and ability,” says Reeves. “When she was 12 we were working on things that I was working on with kids in high school or even in college.”

She revered Tiger Woods, ’98, and Lorena Ochoa. An article describing Ochoa’s penchant for having breakfast with Mexican course maintenance workers is still tacked to the door of her childhood bedroom. When Stackhouse met the LPGA star at a tournament in Atlanta years ago, Ochoa made the starstruck youngster melt with friendly chitchat. “I looked up to her because not only was she great at golf, she was awesome as a person,” says Stackhouse.

The young fans who flock to her tournaments find a similarly magnetic role model in Stackhouse, who is personable, quick to laugh and, at 5-foot-2, close to their size. (Among the things her young fans don’t know about her but would no doubt admire: She has a nearly encyclopedic memory for song lyrics.) Says Stackhouse of her pint-size acolytes, “I love it when little black girls tweet me or come up to me at tournaments to say, ‘I want to go to Stanford!’”

Stackhouse has made the most of her time at the Farm, balancing the demands of a varsity sport with those of a communication major and a staff job at Ujamaa House. (As an ethnic theme associate, she helps orchestrate resident presentations on topics relevant to the black community.) Last spring, Glamour magazine named her one of the Top 10 College Women of 2015. Following that honor in New York City, Stackhouse schmoozed with the crew on Good Morning America and radiated so much poise and charisma—even while attempting a high-pressure mini-golf putt in high heels, in the rain—that GMA co-host Robin Roberts noted, perhaps presciently, “And she’s majoring in communications, so she’ll be taking one of our jobs!”

Roberts et al. can relax—for now: Stackhouse plans to launch an LPGA career after she graduates in June. Until then, she has a few college golf goals to pursue, including winning a Pac-12 individual title and recording one of the program’s best scoring averages. “That would take a lot of consistency, but it’s doable,” she says. “One way or another, I want to find a place for myself in the history of Stanford women’s golf.”

It’s safe to say she already has.