A researcher who studied human health on the molecular level, Sam Gambhir is credited with founding modern medicine’s approach to early disease detection, and his work continues to guide precision diagnostics and inspire a new generation of scientists. 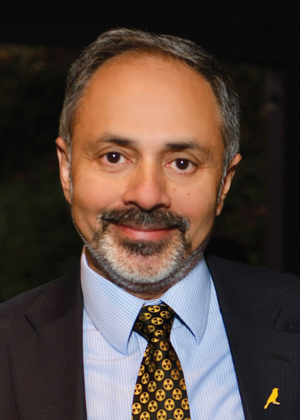 Sanjiv “Sam” Gambhir, the Virginia and D.K. Ludwig Professor of Cancer Research and the chair of radiology at the Stanford School of Medicine, died July 18 of cancer. He was 57.

Gambhir also directed the School of Medicine’s Canary Center for Cancer Early Detection, the Precision Health and Integrated Diagnostics Center, and the Molecular Imaging Program. In those leadership roles, he developed and advanced the science of detecting reporter genes using positron emission tomography. At the molecular level, the genes can signal encroaching illness, allowing early intervention and improving the odds of successful outcomes. In a 2012 TEDx Talk, Gambhir referred to reporter genes as “molecular spies.”

In the talk and throughout his work, Gambhir’s concern for patients was unwavering. He showed a photo of a man at his dying wife’s bedside and said, “This gentleman . . . is asking, ‘Why was this cancer not caught earlier?’” Gambhir said that question was “something I’ve focused my life on for about 30 years now.” He concluded by saying, “If all goes well, I’ll focus on it for another 50 years, to solve it.”

Gambhir was born in India and raised in Arizona. He studied medical science and biomathematics at UCLA, and joined the faculty there. He came to Stanford in 2003, and last year helped establish the Innovative Medicines Accelerator to turn promising lab ideas into tangible clinical progress.

On the day before his death, Gambhir was awarded the Dean’s Medal, the School of Medicine’s highest honor. It was a tribute, wrote a colleague, Professor Joseph Wu, to his revolutionary contributions to biomedicine and human health.

A mentor to more than 150 graduate students and postdoctoral fellows, Gambhir was praised at his memorial service by one of his own mentors, UCLA professor Harvey Herschman. Introducing Gambhir to cellular and molecular biology, he said, was like opening the floodgates of a dam. “While you’re standing downstream,” Herschman said, “the best thing to do is enjoy the torrent as it flows over you and around you and just watch the flowers that grow around the new water flow.”

Gambhir was predeceased by his son, Milan, who died of cancer at age 16. He is survived by his wife, Aruna; parents, Sharda and Raj; and sister.