Eavan Boland was still writing the poem that would eventually become “The Singers” when she loaned the last line to Mary Robinson, her longtime friend and the first female president of Ireland. 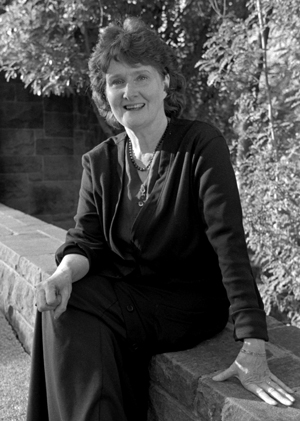 Robinson used the line in her 1990 inaugural address, calling for women to take their place in history by “finding a voice where they found a vision.” Boland’s complete poem was eventually published in her 1994 collection, In a Time of Violence.

Boland, an English professor at Stanford and director of the creative writing program, died at home in Dublin on April 27 after suffering a stroke. She was 75.

Although her work was quoted publicly by politicians (former president Barack Obama read from “Lines Written for a Thirtieth Wedding Anniversary” during a 2016 reception at the White House), Boland was best known for poems that delved into the personal, from motherhood and marriage to identity and belonging.

“After a while, I came to think of myself as an indoor nature poet,” she explained in a 1993 interview for the Irish University Review. “And my lexicon was the kettle and the steam, and the machine in the corner and the kitchen, and the baby’s bottle. These were parts of my world. Not to write about them would have been artificial.”

Boland was best known for poems that delved into the personal, from motherhood and marriage to identity and belonging.

Boland, a native Dubliner, began publishing poems as a student at Trinity College, where she later became a lecturer. In 1969, she married Kevin Casey, a novelist, with whom she raised two daughters. Boland went on to publish several collections, and her work was often featured in the New Yorker—including her poem “Eviction,” which the magazine ran on the day she died.

“It overwhelms me now when I look at her collection of work,” says her daughter Eavan Casey. “You’re not aware of that as a child. She was working on all these incredible poems and essays but being a very present mother to us as well.”

Jill Bialosky, Boland’s editor of three decades at W.W. Norton & Co., says she was drawn to Boland’s poetry because it felt “on the one hand utterly personal and on the other universal.”

Boland joined Stanford in 1995, teaching popular courses such as Women Poets. Under her leadership for 21 years, the creative writing program became a hub of artistic community and talent.

“The gift that she gave the world is she allowed writers the time and space to make art,” says Blakey Vermeule, chair of Stanford’s English department.

A passionate defender of her profession, Boland said in a 2014 speech entitled “Has Poetry a Future?”: “No one has the power in any way or shape or kind to extinguish what is essentially a faculty of the human spirit. . . . As soon as a human being is born, that possibility of poetry is born with them.”

In addition to her husband and her daughter Eavan, Boland is survived by her daughter Sarah and four grandchildren.