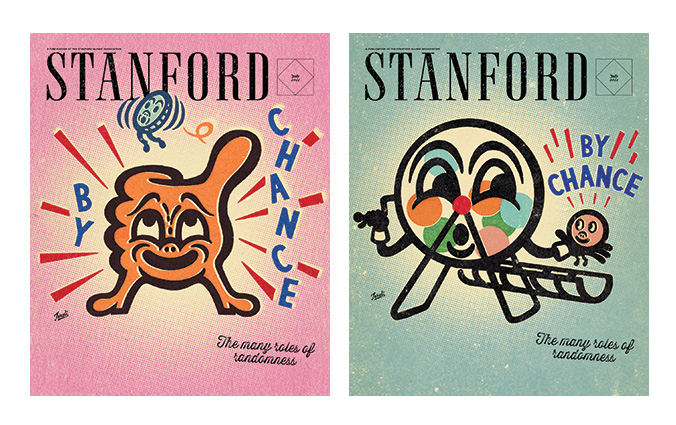 Our July cover package examined the concept of randomness through many lenses, from tales of happenstance to frosh seminar discussions to remembrances of the Vietnam War draft lottery.

My wife had been estranged from her Hawaiian father since age 11, after divorce and relocation 5,000 miles away to New Jersey. Having returned to O‘ahu for a one-week vacation in 2008, we went surfing together at Kaka‘ako Waterfront Park. You can imagine my wife’s surprise upon running into her father at the park that day—his face and frame still recognizable after 26 years. Thankfully, they have maintained a good father–daughter relationship since that fortuitous day.
David Della Lana, ’95
Santa Rosa, California

In the spring of 1966, I was a Marine Corps aircraft crew member in Vietnam. One day, asleep in a cot beside the Da Nang Air Base, I was shaken awake and ordered to report to a C-130 warming up on the tarmac. I was to replace a crew member who had failed to show up for an assigned air refueling mission over the Gulf of Tonkin. After reporting to the pilot, I was closing the final side-entry door when a lone figure some 100 yards away came sprinting toward the aircraft. He was waving his arms and shouting something that was drowned out by the engine and propellers. As he neared, I recognized him as the sergeant originally assigned to this flight. A corporal at the time, I stepped aside as he entered the aircraft and sealed the door. Later that day, we learned that the flight I had just avoided was reported missing over the Gulf of Tonkin. It was never heard from again.
George McLain Ashfield, ’72
St. Paul, Minnesota

I was in the first Vietnam War draft lottery and got a high number. It turns out that this lottery was not random. They didn’t mix the ping-pong balls enough—so December babies got low numbers! In 1967, I helped organize a protest at Commencement; those opposed to the war wore white armbands. This was wildly controversial. It ended my relationship with my mother. By 1969, when the lottery was held,
I had joined the Peace Corps and was serving in Nepal. If I’d received a low draft number, I’d have refused induction or never come home.
I am proud that I was an early protester. I am happy that I dodged the draft. That enabled me to get a law degree and serve effectively
for 40 years in the public policy trenches in Washington, D.C.
Chuck Ludlam, ’67
Washington, D.C.

Your July article on randomness obfuscated rather than clarified its subject. Randomness does not exist in nature. Every event has a specific cause. We just can’t know them all because we’re not omniscient.
David Voelker, PhD ’94
Palo Alto, California

In “Oddly Enough,” assistant professor of computer science and of electrical engineering Mary Wootters says that students often like to think of admissions decisions as random so that it doesn’t hurt their feelings when decisions come out. In his 2020 book, Tyranny of Merit: What’s Become of the Common Good?, Michael Sandel of Harvard suggests that one way to start pushing back against the corrosive effects of the tyranny of merit would be for elite universities, initially as an experiment, to admit “[a] half the class using the existing system and half by a lottery of the qualified, and then compare academic performance at the time of graduation (and career success some years later).”

Maybe it’s time for Stanford to follow through on the experiment. If there’s no difference in the performance and success of the two groups, then admissions based on a lottery of the qualified would be justified and really would be random. There would be no reason for unsuccessful applicants to feel humiliated (or for successful ones to feel superior).
Alan McDonald, ’73, MS ’74
Harwich, Massachusetts

A post about our story on the first draft lottery of the Vietnam War spurred memories.

In July, we reported on the Stanford Doerr School of Sustainability, the university’s first new school to open in more than 70 years.

Color me impressed in vibrant, life-giving green. Worn adages tumble in my mind. Go big or go home. Think globally, act locally. With the creation of the school, the university has placed the world on notice that we need our best minds, deep funding, and real long-term commitment to meet this challenge. Thank you, LSJU! Perhaps in the future we can play “All Right Now” and really mean it.
Diane Underhill, ’81
Ventura, California

It was with a mix of hope and trepidation that I read about the Stanford Doerr School of Sustainability. There are two approaches to sustainability. The first, and more desirable, is to develop workable solutions through technology and research breakthroughs for the gradual transition to renewable energy, while maintaining accessible and affordable energy for the world’s population. The second, and less desirable, is to ram through early adoption of renewable energy along with the forced shutdown of oil, gas, nuclear, and coal plants. Regrettably, the second approach has been what Western governments have thus far pursued. Our electric grids have become increasingly unreliable, with rolling blackouts during the worst possible times, due in part to the intermittent nature of existing renewable energy sources. Dean Majumdar’s demonization of oil and gas companies (“the School does not have plans to seek funding from oil and gas companies for its general operations”) seems like a childish approach to what must be a partnership for an orderly transition.
Phil Schultz, MS ’74, PhD ’76
Houston, Texas

The choice of the term sustainable to identify and qualify the new school to combat climate problems seems a political and economic distraction from the real causes of the problem. Most experts without a hidden agenda would identify these as overpopulation, overproduction, and overconsumption on a global scale. It’s not sustainability of these issues that we need to aim at but a reduction of them on a global level. The name of the school reveals the reluctance to address the real issues head-on.
Kurt A. Pocsi, MA ’63
San Francisco, California

In May, we shared advice from Stanford’s Center on Longevity, about living long past the traditional U.S. retirement age.

The description of a “returnship” struck home with me. As a recently retired physician, I missed the practice of medicine but not the demands of full-time practice. An online search for “opportunities for retired physicians in the East Bay” led me to a marvelous organization, Encore.org. The Encore Physicians Program matches retired physicians to clinical roles treating underserved populations. I now work one day a week for a community clinic, where I see patients and mentor newer providers. The work is challenging and fulfilling, and I am grateful for the opportunity to give back by sharing the knowledge I spent years acquiring. It is the ideal returnship for me.
Doris Rosellini, ’78, MA ’81
Walnut Creek, California

Throwing Out the Rule Book

Pull up a chair, sports fans. The past century’s paradigm—in which student-athletes compete in exchange for an education—is being upended. And where the ball will land is anyone’s guess.

Breyer’s farewell is the finale to 50 years of Cardinal on the Court.