December 1, 1969, is not a date that lives in widespread infamy, but it is as etched in Jim Donart’s memory as the assassination of President Kennedy and the 9/11 terrorist attacks. It was the first draft lottery of the Vietnam War, a moment when he—and every other draft-eligible man in America—learned how much Uncle Sam wanted him for a widely unpopular war.

The 90-minute event—broadcast live from Washington, D.C., starting at 5 p.m. Pacific—was already underway by the time Donart returned from class and squeezed into the game room of the Alpha Sigma Phi house, where his fellow fraternity brothers sat transfixed in silence. Lottery representatives were pulling blue plastic capsules from a glass container, each opened to reveal a fateful month and day. Men aged 19 to 26 would be called up in the order in which their birthdates were selected. A high draft number got you off the hook; a low number might send you to Vietnam, where Americans had been fighting—and dying—in large numbers for the better part of the decade.

“No one spoke unless their birthdate was pulled. Then there was an expletive followed by a quick departure,” says Donart, ’70. “It was surreal to imagine that one’s entire future could be determined by a ping-pong ball.”

Similar scenes were playing out in dorm lounges across campus. “The whole thing was almost comical until one considered what was involved: getting drafted, serving as a conscientious objector, going to jail or leaving the country,” says Dan Caldwell, ’70, MA ’78, PhD ’78, a resident assistant in Arroyo who was already headed to the military as a member of Naval ROTC.

The arbitrariness was much the point. Up to then, conscription had been conducted by local draft boards, an opaque process that critics said enabled the wealthy and well-connected to avoid being drafted. A national lottery aimed to put everyone’s name in the hat. Not that its fairness goals earned much credit from those already set against a war that was nearing the end of its second most bloody year. In a front-page story the morning of the lottery, the Daily explained the new draft system using a hypothetical student draftee: “C. Fodder.” 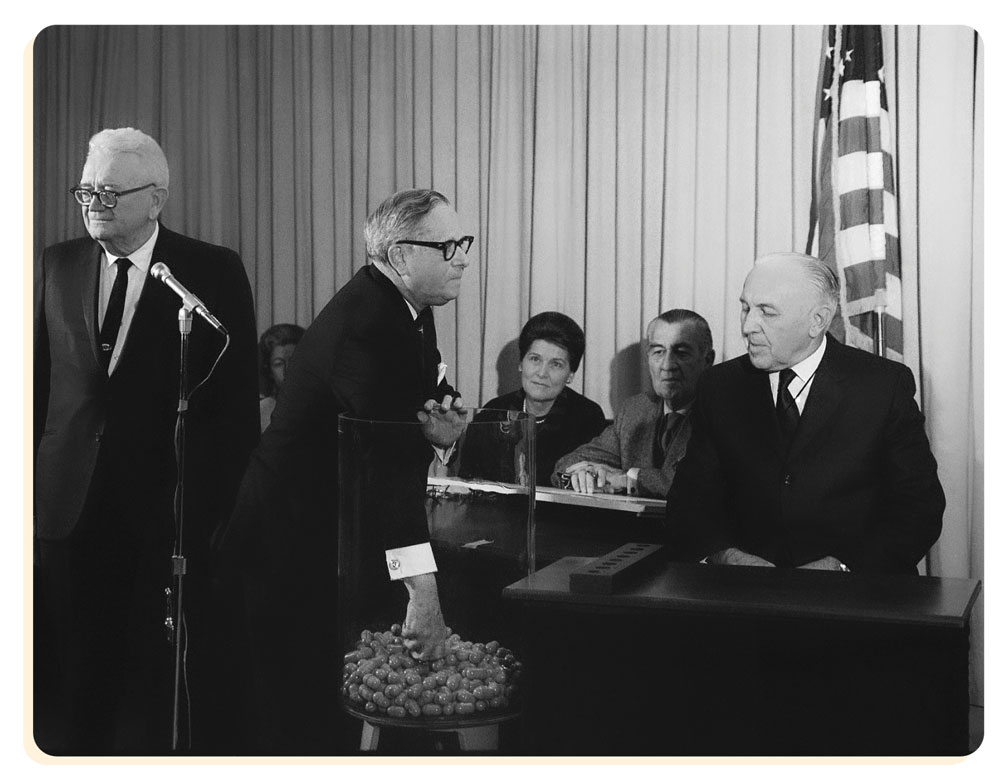 Writ large, the 1969 lottery would cause sweeping changes to tens of thousands of lives, a cascading set of effects social scientists have deemed “one of the most significant randomized experiments in history.” Research has found that those drafted after the lottery were more likely to smoke, die young, earn less, vote and raise offspring who joined the military, among other outcomes. Kevin Devine, ’70, refused induction into the military and, after the FBI chased him down, ultimately faced the choice of a three-year prison sentence or conscription into the Army. He joined up, but after multiple trips to the stockade, he was issued a general discharge. It read: “Unable to adapt to military life.” That was the “understatement of the decade,” he says. “The upshot here is that I spent a lot of years after my draft and Army experiences thinking of myself as an outlaw and a bad fit for most elements of life for which Stanford was supposed to prepare me.”

An estimated 500,000 men avoided the draft through various strategies, including conscientious objection, emigration and preventive enlistment in military roles unlikely to see combat. And university students had more options than many—they could become officers and, until 1971, they could defer service till graduation.

‘Now my plans, my world were upended. Law school would be postponed or, perhaps, become moot. I might become moot.’

Tyler Comann, ’72, a sophomore during the 1969 broadcast, remembers sitting in the hallway of Roble listening to the radio with 15 or so dormmates, each kicking $1 into a kitty to go to the first man selected. It wouldn’t take long for Comann to collect. The first birthdate picked—September 14—was his. Rather than face almost certain deployment as an Army grunt, he enrolled in a reserve officer training program for the Navy, the branch of the Armed Forces his father had served in during World War II. He would serve three years in the Navy after graduating in 1972. For him, the experience proved to be a blessing. “I learned a tremendous amount about leadership and about human behavior and responsibility. I had kids working for me from the Bronx, from East L.A., that had gone to Yale, that were from Arkansas and all over. You really figured out people are people.”

Like Comann, Norman Goodman, ’71, MA ’77, PhD ’81, also had a World War II lineage. He and his brother were named after his mother’s younger brothers, who were killed within a month of each other fighting in the war. Growing up, Goodman was strongly influenced by his parents, who he says worked tirelessly for international understanding and world peace. Whatever happened the night of the draft lottery, he wanted no part of the military. But as the drawing continued, his fears grew that the feeling might not be mutual.

He had missed hearing the first 100 picks of the broadcast, so as ball No. 365 was opened without his hearing his birthdate, he began to come to grips with the notion that his number must have been called early. But then came ball No. 366, an extra capsule to cover leap-year births. And in there was June 8, his own birthdate. The next day, the Daily pictured Comann and Goodman, the alpha and omega of the lottery results, on its front page.

“It was a huge relief to know that I could plan my life ahead without being forced to fight in a war that I thought was wrong and unjust,” Goodman says.

Viewed from the smartphone era, it’s fascinating how a few missed moments could make the suspense of the event even more excruciating. By the time of the lottery, Vance Chan, ’70, MBA ’76, knew two of his childhood acquaintances had died in the war, and he remembers being so queasy during the broadcast he had to rush to the dorm bathroom to dry heave. When he returned, nobody could tell him whether his day had been selected. The agony of uncertainty lasted until the 365th pick, when his birthdate was called.

‘It was a huge relief to know that I could plan my life ahead without being forced to fight in a war that I thought was wrong and unjust.’

Donart, too, had missed the first few minutes of the broadcast coming back from class. The idea of breaking the intense silence in the game room to ask his fraternity brothers whether October 26 had already been called would have seemed ridiculous. Plus, what were the odds his birthdate had been in the first few selected? He started to exhale as the list of dates called lengthened. People expected less than half of the birthdays to lead to inductions. (It turned out to be more.) But as the event wound down without him hearing his own birthdate his dread returned. At the end, a student who’d been keeping a list confirmed his fears. His birthdate had been chosen seventh.

“Now my plans, my world were upended. Law school would be postponed or, perhaps, become moot. I might become moot.”

It appears that no Stanford student died in the war as a result of the lottery. Of the 20 military deaths in the Vietnam War associated with the Stanford community, according to university archives, all seem to have involved men who joined the military earlier than December 1969. Most were officers. More than 58,000 Americans died over the course of the 20-year conflict.

Certainly for Donart, the results weren’t as dire as he first feared. He joined the Marine Corps Reserve and was to be trained as a machine gunner. But by the time he completed boot camp, troops were starting to come home. Law school was delayed for a year, and his plans for life and family were soon on track.

“But I still shudder when I think of the randomness of that lottery,” he says, “and how it affected so many lives.”

The Devil’s in the Data

When all that number crunching is not enough.