The Whole World in Its Plans

The Stanford Doerr School of Sustainability is designed to catalyze solutions to our most urgent environmental challenges.

Meghan Shea, ’17, a PhD student at Stanford, is an engineer and oceanographer who researches environmental DNA, or eDNA, a relatively new technology designed to help monitor and maintain the health of the world’s oceans.

“It’s like forensics for the ocean,” says Shea. “You scoop up a sample of ocean water, filter all the bits of DNA and sequence it to understand what organisms are present.” It can help solve problems like the spread of invasive species—increasingly an issue because of rising ocean temperatures—that destroy coral reefs and other ecosystems that billions of people depend on for food and income.

Shea knows, though, that she can’t spend all her time studying fundamental science. If she’s to help safeguard the seas, she also needs to know how to influence policy. So, as a student in the Emmett Interdisciplinary Program in Environment and Resources, she takes courses across campus in communication, policymaking and the sociology of science, honing the skills she’ll need to help get such environmental technology out into the world.

“Currently, I’m in a PhD program in the School of Earth,” Shea says. “My two main advisers are in two totally separate schools: the schools of Engineering and Humanities and Sciences. My academic world is split across many corners of the university.”

The Time Is Now

Shea is one of hundreds of students, researchers and faculty scattered across campus who have long been working on the challenges of sustainability—preserving natural resources for the long-term benefit of people and planet—that are made increasingly urgent by the rate of climate change. Now the university is taking the bold step to bring this brain trust together under one umbrella—and build upon it—with the creation of its first new school in more than 70 years, the Stanford Doerr School of Sustainability.

The school will focus on three broad areas: earth, climate and society, said President Marc Tessier-Lavigne in a letter to the Stanford community. “It represents our collective commitment at Stanford to developing knowledge and solutions in these fields at the scale this work demands.”

“Climate and sustainability are the defining issues of the 21st century,” says the school’s inaugural dean, Arun Majumdar, a professor of mechanical engineering and former director of Stanford’s Precourt Institute for Energy who has advised the Obama and Biden administrations on renewable energy. “Arguably, there is no other issue that is more important that will affect humanity and the planet. As is often said, we do not inherit the earth from our ancestors; we borrow it from our children.”

Years in the making, the new school propels a key part of the university’s long-range vision: to create a future in which humans and nature thrive in concert and in perpetuity. The transition team, led by professor of physics and applied physics Kathryn Moler, ’88, PhD ’95, and professor of geological sciences Stephan Graham, MS ’74, PhD ’76, sought input from faculty, students, staff, alumni and volunteers. The two then served as transition dean and vice dean, respectively, for the new school. (Moler took a leave from her role as vice provost and dean of research, and Graham also serves as dean of the School of Earth, Energy and Environmental Sciences until September 1, when it becomes part of the new school.) The plans they stewarded are supported by lead gifts totaling nearly $1.7 billion, including the largest gift in Stanford history: a $1.1 billion donation from John and Ann Doerr.

‘Just as the world needs lots of different schools of medicine, the world is going to need lots of schools of sustainability.’

“It’s not a small thing to make a new school—there is medicine, law, engineering, education, humanities and sciences, and business,” Moler says. “And now we are saying sustainability will be as long-lasting as those. Just as the world needs lots of different schools of medicine, the world is going to need lots of schools of sustainability.”

A Sustainability Commons on the west side of campus will bring together the new school’s people and programs, adding two planned flagship buildings to the existing Green Earth Sciences Research Building and Jerry Yang and Akiko Yamazaki Environment and Energy Building.

The school has a distinctive three-part structure designed to enable it to both conduct groundbreaking academic research and translate those findings into real-world impact. In addition to traditional academic departments, it includes expanded interdisciplinary research collaborations and a “sustainability accelerator” to drive policy and technology solutions (see infographic).

This multidisciplinary approach brings together STEM, policy and the social sciences, Majumdar says, creating new opportunities for partnerships. The school will include 90 existing faculty and plans to hire 60 more over the next 10 years. It will house the Woods Institute for the Environment and the Precourt Institute for Energy as well as a planned third interdisciplinary collaboration, the Institute for Sustainable Societies.

“Frankly, we need science and engineering technology, but we also need innovation in the social sciences and policies that will affect people on a global scale,” Majumdar says. “That’s why we need a new school and why it is structured this way, at this time.”

Many people have been asking Stanford to do more in these areas. Among them was John Doerr, who said at a recent campus event that he was inspired to fight against climate change in 2006 by his then 15-year-old daughter after a family viewing of Al Gore’s film An Inconvenient Truth.

“She said, ‘I’m scared and I’m angry,’” said the venture capitalist, his face crumpling with emotion. “‘Your generation created this problem. You better fix it.’” 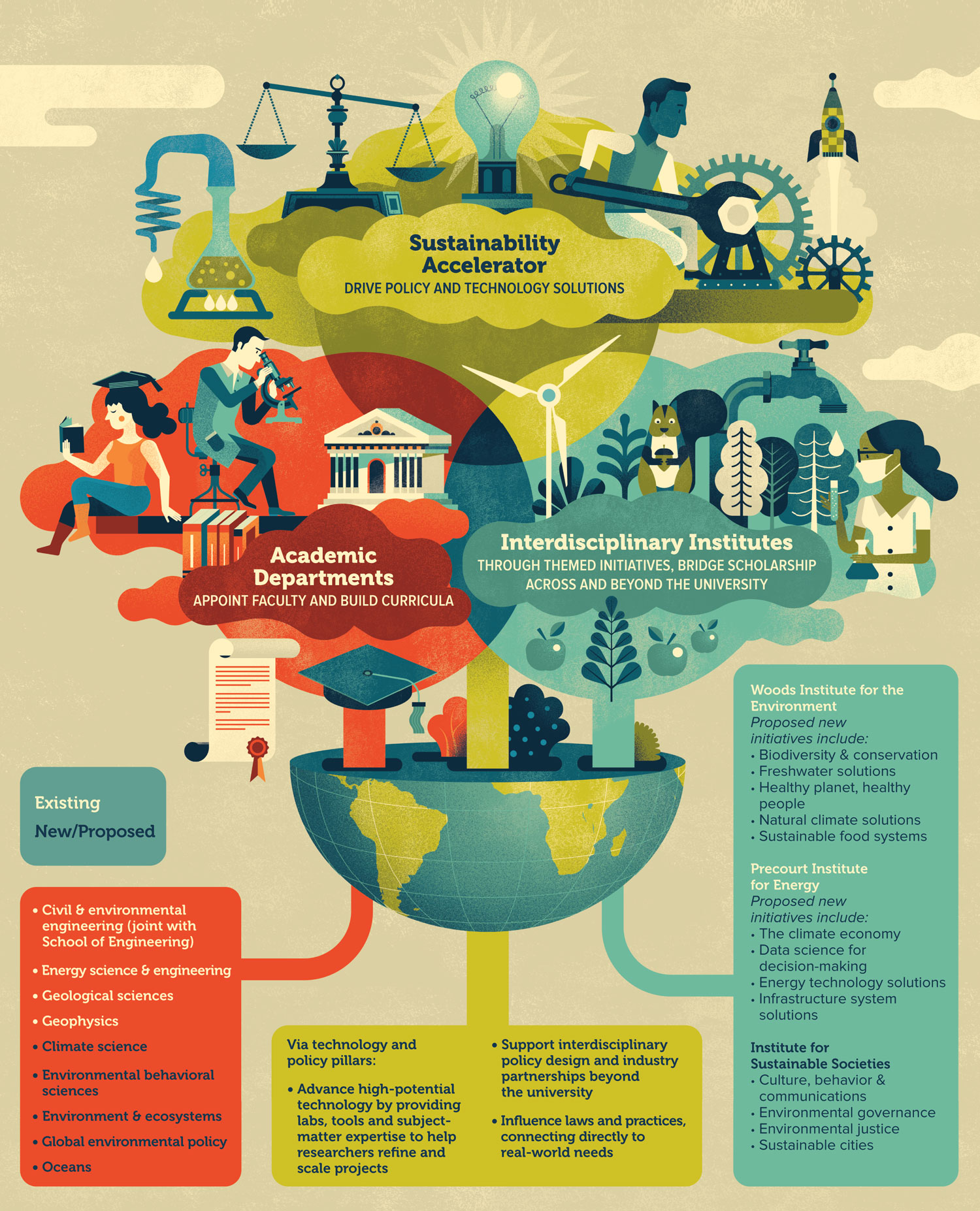 All Hands on Deck

Stanford should not and, the university hopes, will not be alone in its efforts. “No single institution can solve this problem,” Majumdar says. “We need coalitions of governments around the world and nonprofits all looking for solutions. We need frameworks for how to partner with media to tell the story.”

It is because of the epic and urgent need for everyone to pitch in that Majumdar has indicated that some scholars at the new school may work with fossil fuel companies, provided they are committed to being part of the solution. In May, hundreds of students, faculty, staff and alumni signed an open letter calling on the school to decline funding from fossil fuel companies, prompting Majumdar to elucidate the approach. “I want to clarify that the School does not have plans to seek funding from oil and gas companies for its general operations,” he wrote in a letter to the school community. But, he added, individual faculty members and initiatives could pursue industry partnerships in accordance with university policy.

“There are companies that deny climate change,” he said at a campus event. “Those are dead against my values. But I also believe it’s unwise to paint the whole industry with a single brush.” Majumdar plans to maintain an open conversation with the community over the coming months to discuss such issues, with a goal to create a shared set of values.

Shea, the graduate student working on eDNA, signed the open letter. She believes the dialogue is essential to ensure that the school engages with the world ethically and works for environmental justice.

“So many people’s lives have already been catastrophically affected,” Shea says. “This new school has the potential to radically reshape how research is being done at Stanford and beyond.”

Ultimately, the school is designed to not only conduct research and educate students, but also to ensure that knowledge generated at Stanford has benefits worldwide. The Sustainability Accelerator will drive this in both technology and policy realms, explains Michael Wara, JD ’06, a senior research scholar at the Woods Institute for the Environment and the accelerator’s interim director for policy engagement.

On the technology side, it will provide space, tools and expertise to help researchers refine and scale prototypes, as well as connect with industry and NGOs, Wara says. For example, Thomas Jaramillo, ’98, an associate professor of chemical engineering at Stanford, is designing a method for extracting hydrogen—a high-potential source of clean fuel—from impure rather than pure water.

“If you could make hydrogen out of water that has salt in it, that would be a lot cheaper because there’s a lot more of it,” Wara explains. The accelerator could facilitate moving such technology from lab to market, helping to replace fossil fuels with cleaner energy.

On the policy side, the accelerator will support cross-campus policy design and partnerships with government and other external stakeholders on everything from ecological resilience to environmental justice. Students will be trained in policy analysis to help future government officials understand the breadth of environmental challenges facing us and how to alter their course.

“I try to put grad students in the driver’s seat,” says Wara, a former Stanford law professor. In one of his courses, a student team provided policy analysis for a U.S. senator who wanted to know the possible outcomes of new taxes on carbon emissions. The team supplied background research on potential effects on levels of energy emissions, implementation costs and more. “What the students say to a policymaker might change their view,” Wara says.

“We have designed a school for the future,” said Tessier-Lavigne, “combining knowledge generation and impact.”

Dams help us. Dams harm us. Now, longtime adversaries are coming together to bridge that uncomfortable divide.

A School for the Future

With the creation of the Stanford Doerr School of Sustainability, the university confronts the greatest issue of the 21st century.