We took a look at the pros and cons of the patties on our plates this spring.

While your article covered important health and environmental issues related to the impact of beef consumption, there is another issue—animal and human welfare. Feedlots regularly confine livestock to areas with virtually no space to move, meatpacking facilities require employees to work under unsanitary and stressful conditions, and communities and wildlife near feedlots and meatpacking facilities are often sickened by toxic runoff and air pollutants. Similar arguments can be made for the poultry, swine and dairy industries. I’m hopeful that the growth in plant-based meat consumption will help wean us off our addiction to meat and create a healthier, more environmentally sustainable and more compassionate world.

Let’s see. The typical burger shown on the cover, which looks delicious, has lettuce, tomato, cheese, pickle, onion, sesame bun and, of course, special sauce—who cares if the other thing is beef, plant based, grass fed, lab grown or imaginary? I doubt if many people could tell what the patty is—or maybe even if it is there, say, on a blind tasting!

As for me, I’d love the sandwich with or without “the beef”!

In reading the article’s “bite-size history” of the hamburger, I was disappointed to see that Frances Moore Lappé’s 1971 Diet for a Small Planet had been overlooked. Published 30 years before Fast Food Nation and nearly 50 years before the popularity of Impossible Burgers, Diet for a Small Planet stands as one of the most influential books on the subject of beef, the environment, the human diet and ending hunger on the planet.

We won’t eat the bugs. We won’t live in the pods. We won’t join the hive.

The May issue included a story on eclectic inventor Akshay Dinakar, ’19.

I was surprised to learn that Kennedy was only 88 when he died. That means he was only 30 when he was my favorite prof. How could one so young have known so much?

I enjoyed his human biology lectures, but as university president he miserably failed the humanities (those great currents of thoughts in history) in favor of the social sciences. And then there was the indirect cost scandal, for which Kennedy—at the helm—was responsible.

The May issue provided an article about the effects of young blood on old mice, a story about a quarterly pop-up fix-it shop in Palo Alto, and an unanticipated opportunity to make art.

Finally, an alumni magazine that recognizes that Stanford alumni are more than sports and rah-rah but an intelligent and thoughtful group of people. Thought the articles on parabiosis and the café’s fix-it folks were quite good. Can I recommend that you tap the faculty for articles on topics of significance to us all but with more depth? Can you handle the controversy that might result?

I was amused by the article about the Repair Café. I too hate to throw out what (used to be) perfectly good appliances and devices, and always have a home workbench full of dismantled equipment.

My favorite repair story is of an old daisy-wheel electronic typewriter that, with an adapter, became my computer printer. When its printout became too weak to read, I contacted the manufacturer, who recommended a new motherboard. I discovered that a tiny synthetic rubber bumper on the hammer that hit the characters was heating and softening with use, and could be replaced for a few dollars.
A few years later, a colleague had a problem with his old printer and asked for help. I dismantled it and recognized the mechanism. I suggested he replace the rubber bumper, but warned that the manufacturer probably no longer stocked the part. He was disappointed, until I then pulled a spare out of my pocket.

I started reading the magazine but I was distracted by the news of the virus and was only through with the first pages before I put it down to read the rest later. I thought, I have a lot of time to read it now that I am almost always home. 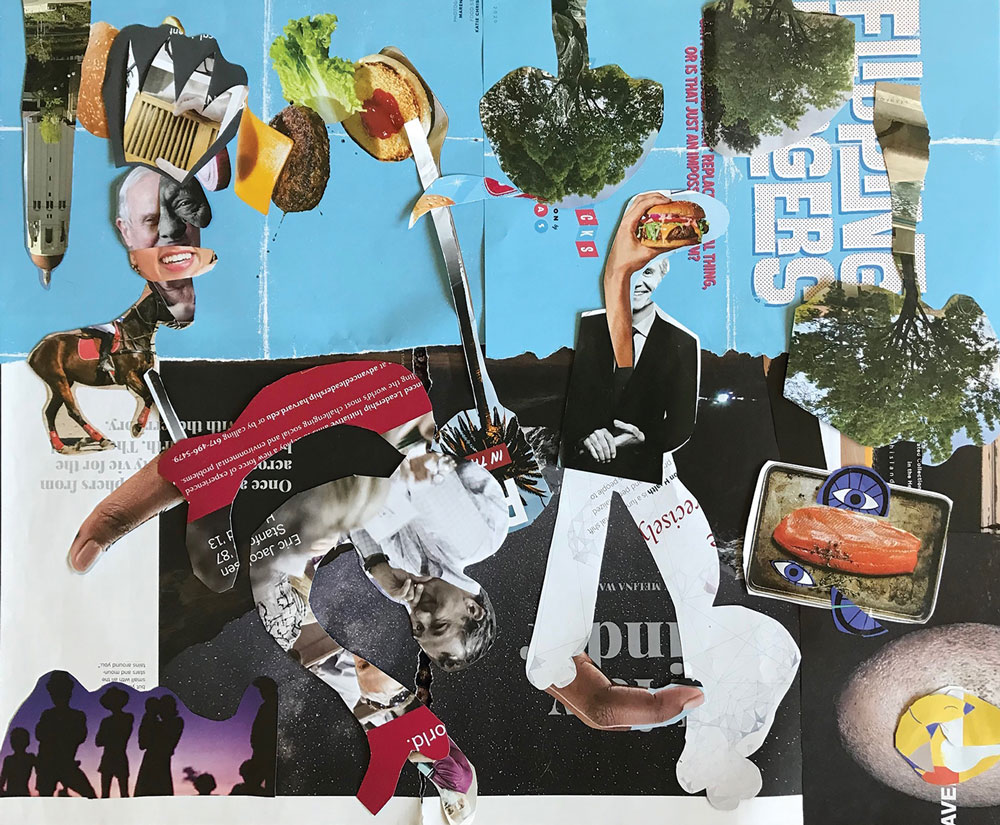 Last night, though, I noticed my wife, who is a painter and visual art instructor, was cutting through some papers while sitting on the floor of our living room. I was busy reading all the articles constantly being sent to my phone so I did not pay much attention. A couple of hours later, I noticed she had cut most of the pictures off my Stanford pages and had made a collage. My first reaction was of despair, but when I saw the collage, I changed my mind. She had seen things that had not even remotely crossed my mind.

I am anxiously waiting for the next issue of Stanford. I will read it quickly this time before she turns it into another collage.

A reproductive immunologist follows her curiosity.