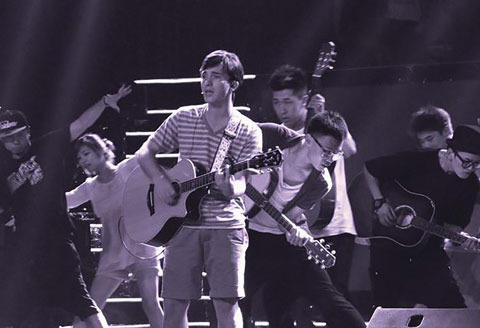 On a July morning in 2012, Clay Garner woke up to find that he’d gone viral in China.

Garner, ’17, a singer and musician, took Mandarin during his freshman year of high school back in 2009. In a bid to improve his language skills, he began posting covers and original songs in Mandarin to Chinese video platforms under the name given by his teacher: Gaoshan, or “tall mountain” (funny, he says, “because I’m not tall at all”). A few years later, he hit the internet big time, stunned to see thousands of comments about his cover of a popular song by Chinese artist Wanting Qu.

In a matter of weeks, as view counts rocketed up, Garner’s life changed dramatically. He performed at video platform Youku’s TV gala in Beijing later that year and on the Taiwanese talent show Superstar in 2014; in 2015, he filmed 30 episodes as assistant host on the talk show Beijingke. On a combination of platforms, his first viral cover now sits at over 3.77 million views—but by Chinese standards, Garner says, he’s “definitely not a super-celebrity.”

Now a senior majoring in East Asian Studies, he hopes to pursue a career at the cross-section of Chinese and American media. As for music, Garner says he has new material in the works—we haven’t seen the last of Gaoshan yet.

He turned Boston into Miami Beach, L.A. into Shanghai and that's only a start.