GOOD CONNECTIONS: For Edelstein, Coleman and Findlen, software can be a key to scholarly eureka moments. Photo: Linda A. Cicero/Stanford News Service 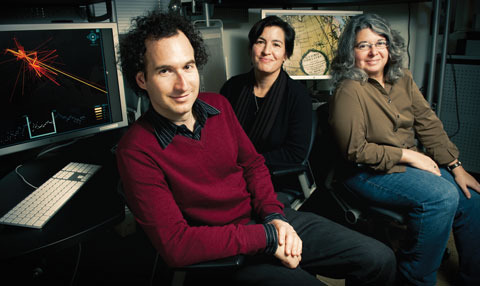 GOOD CONNECTIONS: For Edelstein, Coleman and Findlen, software can be a key to scholarly eureka moments. Photo: Linda A. Cicero/Stanford News Service

International intrigue, a global alliance of investigative journalists and a mind-boggling level of financial complexity all fueled this year’s Panama Papers exposé—when news reports dissected the legally dubious activities of world leaders and companies whose identities were hidden behind offshore corporations. Investigators continue to mine details from 11.5 million pages of leaked documents whose name derives from their source, a Panama-based law firm.

One of the tools for analyzing that colossal jumble of secretive information and interrelationships was based on software formulated to facilitate a Stanford initiative meshing humanities scholarship and computerized data. The impetus was a project called Mapping the Republic of Letters, begun in 2008 and spearheaded by French professor Dan Edelstein and history professor Paula Findlen. Their focus was on identifying research opportunities from metadata, which is data that describes other data. In that project, it meant turning more than 50,000 pieces of correspondence, exchanged during the Enlightenment by thousands of European and North American intellectuals, into topic-
revealing visualizations.

In the context of the Panama Papers, the software took on special utility: teasing out affiliations and dealings between people included in the information trove that enabled investigators to identify pathways to wrongdoing. And that capability sprang from academic goals of aiding traditional scholarly practice with digital technology.

Here’s an example offered by Nicole Coleman, digital research architect for the university library: A data visualization shows that a French philosophe’s only non-French connection was Scottish philosopher David Hume (1711-1776), whose correspondence exhibits a far more diverse network of geographical and social associations. That, notes Coleman, is an insight in itself and otherwise would have to be excavated from a painstakingly comprehensive reading of all the letters. “We see the structure of connections between people we might not have seen without the interface, without the software,” says Coleman. And those linkages, she emphasizes, instigate deeper original research into the way these figures influenced each other and their ideas.

The inception of the software was a 2012 workshop on Early Modern Time and Networks conducted at Stanford’s interdisciplinary Center for Spatial and Textual Analysis, whose labs include Humanities+Design. That session helped lead to CESTA’s creation of software named Knot, built to aid the work of researchers involved with Mapping the Republic of Letters, including partners at the University of Oxford and the DensityDesign research lab at the Politecnico di Milano (a technical university in Milan, Italy). One of the workshop’s participants, French computer scientist Sébastien Heymann, later drew on Knot’s open source code to construct a commercial software product, Linkurious, which was used by the journalists who have been deciphering the Panama Papers.

There are also two projects under way in the Humanities+Design lab, where Coleman is research director, to develop additional visualization tools. Palladio, which has support from the National Endowment for the Humanities, has been active since 2013, and all the code for it will ultimately be open source. Fibra, backed by a grant from the American Council of Learned Societies, is in its early months of development. Information on both is available on the lab’s website.