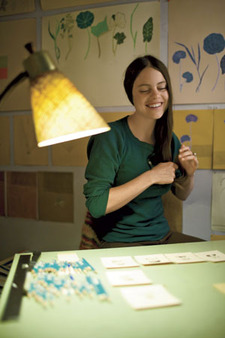 In the summer of 2003, her majors in studio art and psychology completed, Emily Prince repaired to her San Francisco home and that seemed to be that. Unlike many fellow Stanford grads, Prince had no clear career trajectory, no job waiting, no idea of what next.

In the absence of a plan, the young artist did what she's always done: she began to draw. She drew the scissors in the drawer, eyeglasses, skeins of yarn, chairs, photographs of childhood birthday cakes and dozens upon dozens of other things around her—the quotidian objects of her life.

It took a year, but from the drawings emerged her future. “It taught me a way of working—making maps of things,” Prince says, sitting in a tiny bedroom-turned-studio in her home. “But instead of putting everything in one picture, I looked at one thing at a time. It felt natural to me. It's how I look at the world.”

But it wasn't until she turned her method to larger matters that something special happened. In search of a subject that she thought deserved such sustained scrutiny, Prince turned to the Iraq war. She committed to draw a portrait of every American soldier who has been killed.

The project soon drew the attention of Robert Storr, dean of the Yale School of Art and the curator for the 52nd show of the Venice Biennale, one of the world's most important international art exhibitions. He put Prince's project in the show, which hangs until November 21 in Italy.

“The act of drawing is very intimate,” says Storr, who literally stumbled across boxes of Prince's portraits in a New York City gallery. “To sit down and look at the faces of every one of these men and women and to draw them in a sober but not unaffecting way—it's political but it's also human. It is a very potent thing.

“What's good about Emily's project is that it's not rhetorical or sentimental,” he continues. “It doesn't take their lives and use them to make some other kind of statement. It really says, 'Here are individuals.' And this honors the sacrifices.”

At the time this article was written, Prince's ongoing project, entitled American Servicemen and Women Who Have Died in Iraq and Afghanistan (But Not Including the Wounded, Nor the Iraqis nor the Afghanis), included 4,212 portraits.

She says she's always behind. “As of what I recorded tonight I have 35 to draw until I'm caught up. But these numbers slide around every single day. The more I draw, the more there are to draw.”

The project has brought early recognition to Prince, one of the youngest artists in the Biennale at 26. Nearly every review of the 100-artist exhibition, including art critic Michael Kimmelman's in the New York Times, made some mention of the Iraq project. When Prince exhibits the portraits, she distributes them in the shape of a map of the United States, locating each at the soldier's home state. The paper on which she draws varies by the race of the soldier, suggesting the demographics of the volunteer armed forces. Prince makes the 3-by-4-inch graphite drawings from wallet-sized portraits that the families of military personnel post on an “Honor the Fallen” site at.

Her handwriting identifies each soldier's name, hometown, age and date of death. Sometimes she provides additional annotations from the soldier's online obituary. One of her five shades of paper is paler than any skin tone; she uses it when no photograph is posted on the website, and she pencils an empty rectangle where the portrait would go.

The project seems to echo something essential about Prince's nature. It is at once direct and guileless and unexpectedly sophisticated. The artist grew up “on a dirt road out in the forest” near the Sierra mining town of Gold Run, Calif. Asked about some of her favorite artists, Prince quickly names Henry Darger, an obsessive “outsider” artist who lived in obscurity as a Chicago janitor, and Sol LeWitt, the celebrated conceptual artist.

“She is very interested in time in relationship to drawing,” says Stanford professor of art David Hannah, who worked closely with Prince when she was a student. “She did an installation piece at a San Francisco gallery where she let people pick a color and she would draw a line around the room in that color on their birthday. Time and process and line are fundamental to what she does.”

As the artist puts it, “I like to capture ideas but I've always been a crafts person. I need to do something with my hands. I guess I'm nervous and it's a way to calm down.”

Prince—who graduated from Stanford roughly a century after her great-grandfather and whose grandparents also are alumni—is now halfway through a master of fine arts degree at UC-Berkeley. After graduation she married Shaun O'Dell, MFA '04, an artist she met at Stanford. (At the couple's request, Professor Hannah performed a ceremony to celebrate their union at the Marin Headlands. O'Dell played his saxophone.)

She says she has not plotted what might be next for her art, which always seems to unfold organically from her preoccupations of the moment. But curator Storr expects the art world will be hearing more from her. “Simply taking account of where you are in the world is the hardest thing to do,” he says. “In a way, she belongs to the history of documentary art and simply telling the facts.”

JACK FISCHER is a San Jose writer who specializes in the visual arts.

Once imprisoned for his ideas on reform, Ihron Rensburg is now implementing them.