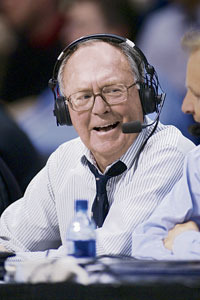 All of Stanford’s four post-World War II Rose Bowls? He was there. The 1998 NCAA Basketball Final Four and 13 other NCAA playoff runs? He was behind the mike. Stanford’s first College World Series appearance in 1953? He was on the mound.

Bob Murphy pitched for the Pacific Coast League Oakland Oaks, did television work for the San Francisco 49ers, served as a consultant for golf legends Jack Nicklaus and Robert Trent Jones, and ran the 1987 U.S. Open at the Olympic Club. During the 1980s and 1990s he was among the celebrity golfers in the Bing Crosby (later AT&T National Pro-Am, and he continues to emcee events each year at the Pebble Beach tournament.

This résumé pales, however, in comparison to his work for Stanford athletics, first as a Hall of Fame pitcher on baseball teams coached by Everett Dean, then as an administrator and sports publicist in the 1960s and 1970s, then as the radio voice of Stanford football and basketball for 30-plus years. Murphy has played in, publicized or broadcast well over 1,000 Stanford games, spanning nearly six decades. His retirement will leave both a huge void and a lasting legacy in Stanford sports history.

The most memorable Murph moments are those listeners know well. Such as when Mark Madsen, ’00, dunked the ball in St. Louis at the 1998 NCAA Midwest Regional final—“MADSEN STUFFED IT, MADSEN STUFFED IT . . . AND . . . HE . . . WAS . . . FOULED!” Or that Saturday afternoon in Maples Pavilion in February 2004 when Nick Robinson, ’04, MA ’05, shot a last-second 35 footer—“HE HIT IT, HE HIT IT, NICK ROBINSON HIT IT, IT IS OVER!”—to give Stanford a win over rival Arizona and preserve a national No. 1 ranking. Or that November 1990 afternoon when Stanford miraculously recovered an onside kick and kicked a last-second field goal to win the 93rd Big Game—“THAT BALL WENT RIGHT OVER THE SOUTH GOALPOSTS, WHERE I WAS STANDING!”

But Murph’s real trademark is the stories, anecdotes and humor shared with generations of fans listening to his broadcasts or events he has emceed. Stanford coaches have always been fair game during a microphone session with Murph. Both the late Bill Walsh (“ladies and gentlemen, I present the Pontiff”) and Mike Montgomery (“Mike, you need to play the Stanford course backward so you can get to know the other side of the fairway”) frequently got the razz treatment. Murph would weave in stories of Stanford professors, locker room speeches, famous Stanford athletes of the past. A history major, Murph would talk about how the late Professor Tom Bailey would corner him in class to offer advice about pitching curve balls to Cal hitters.

Some of the greatest lessons I received from Murph had nothing to do with the games. Observing his warmth and friendliness toward strangers in airports or hotels, or how at ease he could make an interviewee feel. Listening to his opinions about sportsmanship and respect for the excellences of other schools. (“Great band, great band,” Murph would always say when Cal’s Straw Hat Band made its entrance into Haas Pavilion.) Watching the way he handled with great dignity and strength—while continuing to broadcast Stanford games—the terminal illnesses of two of his children.

Once in a while the ol’ right-hander would miss a wake-up call, such as the one in Lansing, Mich., after a night game against Michigan State. That Sunday morning the bus was leaving for an 80-mile trip to Detroit, in a snowstorm, and a flight back to the Bay Area. A Mike Montgomery bus waits for no man, so Murph was literally out in the cold. Or so it seemed.

Using some of his Zete fraternity wiles, Murph was able to find a rental car in a matter of minutes, navigate the Michigan interstate in the semi-blizzard, find a way to deposit the rental car at the Detroit airport—all within two hours—and get to the gate just as it was closing. Without a ticket—the assistant coach having arrived earlier with the team and reported Murph’s expected absence—Bob Murphy managed to secure the only available seat on the plane, in first class. His Cheshire smile at Montgomery, seated in coach, has not been forgotten by anyone on that trip.