Once imprisoned for his ideas on reform, Ihron Rensburg is now implementing them. 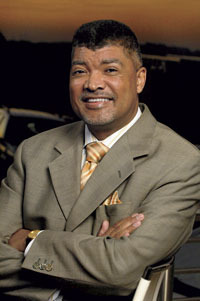 Ihron Rensburg spent much of the late 1980s detained without trial in South African prisons for his antiapartheid work with the United Democratic Front (UDF). “Solitary confinement for nine months at a stretch poses an enormous challenge to one’s intellectual, physical and spiritual faculties,” says Rensburg, MA ’94, PhD ’96. “But my colleagues and I never saw prison as something that would stop us. We knew that eventually we would dismantle the old regime and bring in nonracist, nonsexist democracy.”

His intense drive to “deracialize” the educational system carried Rensburg through the dangerous period prior to the establishment of democracy in 1994. As general secretary of the UDF’s National Education Crisis Committee, he led negotiations with apartheid administrations to reform a system that severely discriminated against black students. After earning his degrees in international development education, Rensburg became deputy director general of South Africa’s department of education. For six years he helped change K-12 curriculum to better educate and empower black citizens culturally, politically and economically.

Rensburg was named vice chancellor of the University of Johannesburg last year and has worked to merge the two university campuses and a technical school that now form UJ. His vision is to turn the univer-sity into one of the world’s premier educational institutions.

Freelance writer Marguerite Rigoglioso spoke by telephone with Rensburg at his home in Johannesburg.

What are the big challenges facing higher education in South Africa today?

To understand today’s challenges, we need to go back to the apartheid years. Thirteen years ago, with the coming of the new democracy, we had 36 higher education institutions, 21 universities and 15 polytechnics, all state run. All of them were ethnically and racially unintegrated, with schools that black, colored and Indians attended being hopelessly under-resourced, and those that whites attended being well resourced.

The challenges we had then we continue to face today, although we’ve made much progress. At that time, the participation rate of black students was not commensurate with their share of the population. Student retention and graduation rates were low. The quality of academic programs and teaching was uneven, as were academics’ qualifications and capacities.

What kind of progress have you made in addressing these problems?

In 1994, we had about 500,000 students enrolled at these 36 institutions; by 2005, that number had increased to 734,000, and we expect it to reach 800,000 in 2010. This has been part of our effort to widen and deepen participation of our citizens in higher education, the target being an 18 percent participation rate for the 18-to-24 age group. That number sat at 5 percent in 1994; now we’re in the region of 13 percent. So we’re well on track with all of these goals. The number of black students at higher education institutions has doubled in the process. In 1994, about 55 percent of the student population was black; in 2005, it was 75 percent.

We now also have a council for higher education that regularly conducts institutional audits to assess the quality of universities, academic programs and teaching. Many programs have come through with good reviews, but several were deregistered for not meeting standards. We’re driving quality up rather than being satisfied with mediocrity.

What has been your most significant improvement in creating greater access for blacks?

We’ve created a national student financial aid scheme, particularly for students from disadvantaged and black communities who are academically deserving. We’ve gone from committing 20 million rand [$2.82 million] to committing 1.2 billion rand [$148.12 million] to this program annually. It’s an astronomical investment, and probably one of the greatest success stories of the postapartheid higher education transformation program.

We have a system that still reflects a two-nation society, a society comprising those in the formal and informal sectors, the rich and the poor. Some institutions are reasonably okay, while others, those that have historically been disadvantaged, are not in a position to grow into great universities.

We also need to focus on research. We still have a racially balkanized situation here, with 12 or so traditionally white universities producing the bulk of the research output, and the bottom institutions hardly contributing. This is the result of a complex history of inadequate attention to investment in these institutions.

In the most disadvantaged part of the system, graduation rate targets are way behind the national goal. The polytechnics in particular are also struggling because most of their academics have only a master’s degree or less. So we’re challenged to drive up their qualifications to the PhD level.

In general, significant physical and financial resources will need to be invested between now and 2014, the second decade of our democracy.

Over the last 20 years, we’ve seen a steady decline in the real value of state investment in our education. Only in the last year or two have we seen an upturn. But we still have a ways to go. Prior to 1985, the state contributed 80 percent of the cost of the university, leaving the university to obtain the rest through student tuition and residence fees, and third-stream sources such as partnerships with research institutions, and donor and alumni contributions. We’re now sitting with a 55 percent [government] contribution. As a result, universities have had to increase tuition fees significantly. But 75 percent of our students are black, and at least half are financially disadvantaged. So any significant increases in tuition could make universities inaccessible to many students.

The expectation is that the state will lift all institutions at least up to the aggregate level of the top 10 research institutions. To do that will require considerable resources, investments and time.

Is the government willing to invest more?

The treasury has never been in a better position. They’ve become extraordinarily effective in collecting taxes as well as widening the tax base. We now have a balanced budget and a surplus. We’re in a position to expand spending. So it’s not a matter of not having the cash. It’s still the historically disadvantaged institutions that have not yet seen effort or investments put into them. But I’m much more optimistic than I would have been two years ago, based on my conversations with the education minister and senior officials in government.

Why has South Africa decided to merge a number of universities?

One of the driving forces was the need to achieve efficiency. We had polytechnics and universities with 5,000 students, and they could not operate at the appropriate scale. So we merged our universities from 36 down to 23.

How will the merger benefit the University of Johannesburg?

It allows us to build a new institution, one that brings together a polytechnic structure into a university structure. I’m confident we’ll become the benchmark in a decade’s time for institutional productivity and responsiveness in South Africa. The top five universities that have not gone through such mergers miss the dynamism and energy that is enabling us to rethink our institution.

What models have you drawn on?

We look to the new generation of universities in the United Kingdom formed in the 1980s—for example, Manchester, Warwick—institutions that were born out of polytechnics and have become giant universities. And, of course, going further back, we look to MIT and Caltech in the United States, two excellent examples of the direction we’re leading UJ in.

What might other countries learn from South Africa’s experience promoting diversity and equal opportunity in education?

You have to dream of the possibility of building institutions that are truly embracing. And you have to begin with creating the social conditions that enable widened and deepened participation, not only as a political imperative, but as a social requirement, while also maintaining and strengthening your academic standards. You must rethink the culture of the university. Does it affirm individual differences? Or does it force people to come into a particular cultural space and live with it?

You also have to look at ways to identify at-risk students early on. You have to put in place the academic support services and systems, the student-counseling system, the language resources, to enable this wider participation to be successful. It’s one thing to widen participation; it’s another to widen success. These are some of the big challenges that face all universities as we move toward greater inclusion. It’s an international phenomenon.