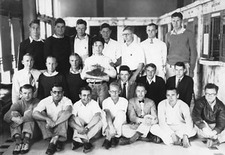 Arthur L. Miller, '31 (history), MA '47 (education), of Sequim, Wash., died July 19, at 97, of a stroke. He was the last surviving member of the “Immortal 21,” a group of students who stole the Axe from Cal in 1930. The students, dressed as guards, fled with the Axe as it was being transferred to a bank vault, and were acclaimed as heroes back at the Farm. A member of the baseball and soccer teams, Miller served in the Army during World War II. After earning his master's degree, he worked as athletic director and counselor at Edison High School in Fresno, Calif., and then counselor at Roosevelt High School. From 1960 to 1971, he was principal of Fresno High—the high school's longest serving principal upon his retirement. He is survived by his son, Robert; and his daughter, Barbara Smith.

Walk-ons may not be the most talented athletes on the roster, but they know what it means to persevere.