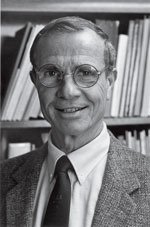 It is self-evident now: regular exercise can stave off heart disease and other chronic health conditions. But decades ago, that idea was still being explored. A pioneer of the field of exercise epidemiology was Ralph Paffenbarger. His landmark research showed that people who burned more calories lived longer, healthier lives.

Paffenbarger, a professor emeritus of health research and policy at the School of Medicine, died July 9 in Santa Fe, N.M., of congestive heart disease. He was 84.

Paffenbarger was born in Columbus, Ohio, and became the youngest Eagle Scout ever from his home state at the time. He served in World War II before attending medical school at Northwestern U. and then earning advanced degrees in public health from Johns Hopkins U. He worked at Harvard and UC-Berkeley before coming to Stanford in 1977. After becoming emeritus in 1993, he returned to UC-Berkeley to join the department of human biodynamics.

In 1960, he launched the longitudinal College Alumni Health Study following more than 50,000 Harvard and U. of Pennsylvania graduates. The findings, published in 1986, included significant reductions in death rates in men who burned at least 2,000 calories per week, and showed that people who got adequate exercise lived one to two years longer than their sedentary cohorts. The results were influential in recommendations made by the surgeon general and other health authorities.

Paffenbarger took his own medicine.

At 45, “all of a sudden he started to go running at the local junior high school track,” recalls his son, Charles Paffenbarger. In the short term, the increase in exercise was hard on the professor. His son says he was on crutches for several days after his first marathon. But the senior Paffenbarger made the events a habit, completing the Boston Marathon 22 times. Renowned in his field, Paffenbarger also was known as modest, polite and generous. Even after his own running career had ended, he would play host to comrades who were competing in Bay Area races.

Paffenbarger is survived by his wife, JoAnn, four children from a previous marriage—Ralph III, Ann Dow, Charles and Timothy—and four grandchildren. He was preceded in death by his first wife, Mary Dale Higdon, and two sons, James and John.