Nothing gets past Jane Campbell.

When Jane Campbell puts her cleats on, she always ties the left one first. Because that's the way she does it and it must always be thus. If she ties the right cleat first in some absentminded act of self-destruction, she has to begin again. Untie the laces, start with the left one.

A sophomore goalkeeper for the women's soccer team, Campbell isn't particularly talkative about being superstitious. In general, she's averse to labels. She wants to be a pro player, but please don't think of her as Jane Campbell, soccer person. With all that understood, she readily cops to one thing: "I'm a perfectionist with soccer."

This season, she achieved some statistical symmetry with that ideal. She played almost all of a school-record shutout run of 893 minutes, 58 seconds at the start of the season. That amounted to eight wins and a double-overtime scoreless draw with Notre Dame, before a 1-1 double-overtime standoff in the Pac-12 opener with Utah snapped the streak. Among the best of the shutout moments was a second-half save against Florida, leading to a 1-0 Stanford victory. A backtracking Campbell tipped an arcing shot away with a fully extended leap and lunge. 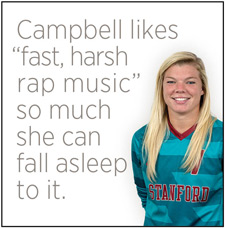 Campbell is quick to say that the shutout streak reflected an extraordinary performance by everybody on defense. But perhaps a bit unexpectedly, she's also clear about her relative disinterest in it. "I just want to win," she says, "as a team." As of early October, that was happening, too. The Cardinal were 8-0-2.

A mother's attempts at a clean slate leave her son with anything but clarity.

"For Love of Country"