A mother's attempts at a clean slate leave her son with anything but clarity.

Some people are born storytellers. Others hone their skills by conjuring up new lies to patch the cracks forming in their old ones. Take This Man, a new memoir by Brando Skyhorse, '95, captures the story of a tumultuous mother-son relationship based on invention and reinvention, and a young man's ensuing search for the truth behind his existence.

Abandoned by his father, 3-year-old Brando Kelly Ulloa is given a new name, heritage and family history—Brando Skyhorse, American Indian, son of an imprisoned political activist. His mother, Brando writes, "saw no reason that just because we were born Mexican we'd need to live as Mexicans." A succession of stepfathers—some prisoners, some con men, all initially charmed by her wild stories—shapes young Brando's world, as the boy finds a little bit of the dad he's searching for in each of them. But one by one, they inevitably leave. It's not until 30 years later that he finds his biological father and begins to reconstruct his idea of what a family can be.

Despite the chaos at home, Brando does well enough in school to get into Stanford. The arrival of his acceptance letter is a nonevent, "a parenthetical aside that didn't merit enough interest in the house for a closing bracket," he writes. Once on campus, he struggles to connect with others. Mostly, he says, he "excelled at hating everyone and everything for every reason." His main obstacle: the shadow of his mother, a constant presence even from a distance. "I was as much in her thrall now as I was when we shared a house, since my college life revolved around avoiding her and keeping her howling anxiety at bay." He eventually graduates and goes on to earn an MFA from the Writers' Workshop program at UC-Irvine. He says he still winces, however, when he thinks back to his early days at Stanford. These days, Brando is the 2014 Jenny McKean Moore Writer-in-Washington in the English department at George Washington University.

In this excerpt from Chapter 4 of Take This Man, Brando revisits the time when his stepfather Robert, a recently released convict and the first of the men to move in, took on the role of "Dad."

My first live-in stepfather, Robert, took me into the backyard with a baseball and a pair of gloves one smog-crusted afternoon when I was ten years old. Bored with the repetitive play, he roughhoused me atop his shoulders and then hoisted me over the neighbor's fence, dangling me by my ankles above a gully filled with broken glass.

"I can't hear you!" he said and dropped me down a couple inches. I swayed aloft in midair like a pendulum, the tips of my hair grazing shards of cracked windows, and howled with equal doses of giddy joy and shrieking terror.

I was lifted back over the wall. He handed me my baseball. "Boring game," he said and ran in the house. Robert was a lightning flash: hot, blinding, and gone before the thunder came.

Robert was serving his fifth year of a five-year sentence at Arizona State Prison at Florence when he met my mother through one of her personal ads. He was born on St. George Island, Alaska—his Aleutian name was "Tall Fox"—and sent to the Chilocco Indian School in northern Oklahoma, a boarding school created by an act of Congress aimed at "educating" Indians with a useful trade. When he was sixteen, Robert was expelled from Chilocco for driving over a cop's foot. He graduated to a series of youth authority camps and second-string county jails before arriving at "Arizona State," which is what he called the prison in conversation, as if he were discussing his alma mater.

He appeared late one night in a taxi at our front steps with a canvas duffel bag and the musk of an all-day Greyhound trip. His was a weaselly physique, with cords of stringy shoulder-length hair and a splotchy complexion set off by hollow-point-bullet cheekbones. Sitting at the bottom of our staircase, Robert lit up a tracer fire of Camel cigarettes, tripping into a dry-heave stutter but full of a stand-up comic's confidence.

"I brought something for you, Son," Robert said.

Who is this man? I thought. I'd never heard of him before. He made Son sound like a punch line. From his tight jeans pockets, he scooped out moist dollops of dollar bills. Money like this, I'd learn, was meant to befriend. 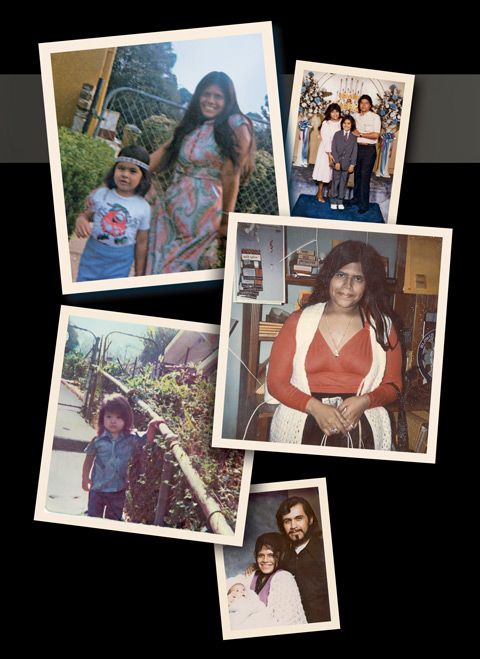 THE EARLY YEARS: (Clockwise from top left) Brando with his mother, Maria Teresa ("Note the cool 'Indian' headband," Brando says); the Las Vegas wedding of Brando's mother and Paul Skyhorse Johnson; Maria Teresa; Brando on his baptism day, with his mother and his biological father, Candido Ulloa; Brando as a toddler outside the family home.

The next morning, Robert moved into our house as my mother's fiancé, having proposed marriage in a letter from prison. They'd known each other maybe two or three months.

"Why not marry?" my mother said. Frank had never asked. Paul had done nothing more than give her his "name." (She was never formally divorced from Candido.)

"We don't have to move anywhere," she said. "Your grandmother doesn't want to be alone."

I was ten years old when I "gave" my mother away as acting father of the bride in a Baha'i faith marriage ceremony—a religious flirtation that would end as soon as my mother had redeemed her member's discount for the wedding space. Robert wrote several pages of vows, which took him almost a half hour to read.

"O Mighty Grandfather to the North," he said, and gave thanks to the wind that protected his ancestors.

"O Mighty Grandfather to the South," he said, and blessed the clouds that the Great Spirit gave us to nourish Mother Earth. His filial piety extended gratitude to sixteen different grandfathers.

"Oh, mighty grandfather," my grandmother intoned at the wedding dinner, "was that a lot of Indian bullshit." Our celebratory feast was at the Love's Bar-B-Que down the road, the same branch of the restaurant chain where Candido first worked as a busboy. 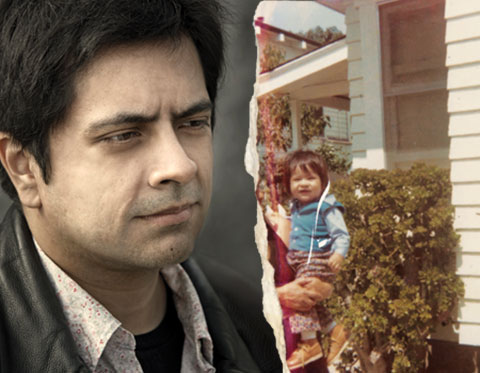 Robert wasn't a worker. He had a "Let's Spend the Night Together" swagger that young, lean, and confident men use to get away with murder, though he didn't indulge my mother's high bar of outlawness by pretending to be a killer. He was a lover. As in, he loved himself and loved others to love him. He ingratiated himself to strangers with a stutter and a smile and traveled shirt unbuttoned to his waist, flaunting his muscular, jaundiced smoker's skin as a healthy "beachcomber's tan." His maxillary dentures became, in his hands, half of a clown's set of chattering false teeth. "If I forget these at home," he'd say, "I'll just gum my dinner to death!"

Every day, Robert invented his itinerary from scratch. He didn't work a full-time job. Life with us filled his schedule. Before I met him, I thought that men worked reliable hours, being neither seen nor heard, like my grandfather Emilio, or they jealously guarded their "private" time like Frank, who'd show up at our house cranky and tired, close my mother's bedroom door, and then leave fast in the morning. When I needed a father, Robert was there. He was always there—at first. It took some getting used to.

I was seduced again and again by watching a man doing "man" things around our house. On a rotating monthly basis, Robert negotiated money from my grandmother for odd job house repairs. I wanted "in." He'd do a two-thousand-dollar roof retarring for five hundred dollars, including essential supplies: cartons of Camels and tall-boy Buds. Off went his plaid western shirt, and up he went on top of the house while I eagerly ferried large purple buckets of roofing tar up a rickety broken ladder. Then I kept his supplies "clean" of insects with endless hours of spraying layers of Raid ant poison that congealed into cold, thick foam that clotted on the ground like fine snow, breathing in the sweet pine-scented clouds of nozzled death until I was dizzy.

In his jeans, with a cigarette dangling from his mouth, swabbing his mop in sloppy athletic circles, he resembled some kind of construction-site cowboy or desert-camp-honed outlaw. He painted our house with haphazard bursts of attention and cheap paint. Robert "repaired" our crumbling gazebo by dismantling it and repurposing the boards into a makeshift fence to hold back mounds of dirt he'd excavated from underneath the house's concrete and wood support pylons in the basement. Who cared if the leaks in the roof got worse or if his plans for a "rec room" were literally undermining the house's very foundation with each shovelful of dirt that I obediently wheelbarrowed into the backyard? This was what a man at work looked like. 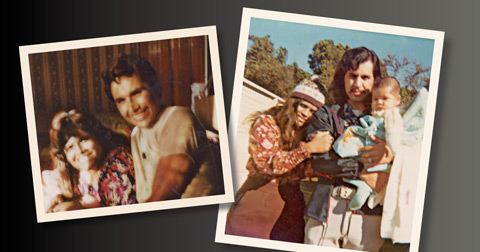 There were long "errand" drives into cinder block neighborhoods by the airport to meet "friends" he'd made chatting on his new CB radio. Or beach trips—boardwalk "trick" hustling—where our feet never touched the sand or the ocean. Danger never looks as sexy as when it's young; when it has the blush of not recognizing its own recklessness. Each trip somewhere with Robert—outfitted in ass-tight blue jeans and seventies porn-star frames that covered a third of his ruddy, angular face—had the potential to spiral out of control, but the tensile pulse of a chase scene throbbing underneath lured me out with him anyway.

A good report card once earned me a promise to visit to Golf N' Stuff, a miniature golf complex in Norwalk with go-karts, bumper boats, and a water slide. Instead, we took a long detour to a housing project by the airport with shirtless tattooed men hanging out on street corners. There were security bars and gates on every window and door. (My grandmother added similar ones to our house right around when Robert moved in, which later came to seem like a deeply ironic gesture.)

I locked the car doors behind him, slid down the shotgun seat, and pretended to myself that being motionless made me invisible. He emerged from the house many minutes later with a twitchy, juiced energy—Robert in double time—and a couple large, taped-up boxes that went in the trunk.

We drove home. I stared out the window at the gray expanse of Los Angeles freeway. On a road like this, you were moving somewhere, yet everything appeared identical no matter how far you drove. In the mirrored reflection, I saw Robert and me dueling in tiny Indy style go-karts to see who was the fastest, ramming each other on life preserver–shaped boats on a chlorinated blue lagoon, and knocking Day-Glo-colored golf balls into an oversized windmill. It looked like a great day. There'd be a hundred more days like this, perfect father-and-son moments reflected in a car window I stared out of while I sat in a parking lot in a bleak part of town. I was learning, though, that imagination could always give me the father I wanted when my own imaginary father couldn't.

Four decades ago, university researchers figured out the key to computer privacy, sparking a battle with the National Security Agency that continues today.

Even the best lines can't guarantee you'll get the girl.