Working Around the Clock 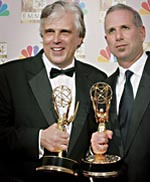 I pull up to a nondescript office building, tell the security guard I have an appointment with the boss, and am quickly told to drive through the gate and around the side to a parking area. There’s no phone call to see if the boss is expecting me, no ID check, even, to confirm that I am who I say I am. Minutes later, I’m walking into the headquarters of the federal government’s Counter Terrorism Unit, whose helicopter is parked outside. Considering all the CTU and its star agent have faced in the last two years—an assassination plot on a presidential candidate, a terrorist plan to detonate a nuclear bomb in Los Angeles—getting into the building is surprisingly easy. Too easy.

However, this anonymous, low-slung warehouse space in Woodland Hills, Calif., is not actually a high-security government installation. It’s the sets and offices of the Fox network’s hit drama 24, starring Kiefer Sutherland as anti-terror agent Jack Bauer. And the boss I’m here to see? Robert Cochran, ’71, JD ’74, who, with writing partner Joel Surnow, is the show’s co-creator, co-executive producer and co-head writer.

Since even before its first episode, in 2001, 24 has been one of the most talked-about shows on television. Cochran and Surnow shared the drama-writing Emmy after the first season and are now in production for the third, which began October 28.

“I’ve had shows that were successful,” Cochran says in his bare-bones, decidedly unpresidential office, “but this one, with the Emmy, and the nominations we’ve gotten, and all the publicity, it’s fun.”

Each episode of 24 is frenetically paced and stylishly shot, but the key to the show is its gimmick: the entire season comprises one day, unspooled in 24 one-hour installments of real time. It’s a compelling, high-pressure concept, and critics have been hooked since they saw preview tapes in the fall of 2001. “24,” wrote Time television critic James Poniewozik back then, “is the most distinctive, addictive new TV series this season. As an old-fashioned thriller, it’s relentless, tense and deliciously paranoic, with more twists than a Twizzler.” Despite its critical success, 24 didn’t find a large audience until last season; it ended the year as Fox’s second-most-watched scripted show, trailing only The Simpsons.

Cochran’s route to Hollywood was as unpredictable as a 24 plotline. After leaving Stanford with a bachelor’s in economics and a law degree, he went to work as an attorney in San Diego. “I didn’t hate it by any means,” he recalls, “but I was 26, 27 years old, and I felt this would now be my life for the next 40 years.” Seeking a change of pace, he went to Harvard Business School, graduating in 1980, and joined management-consulting firm McKinsey & Company. He liked what he was doing, but tired of the constant travel.

“I’d always wanted to write,” he says, “and I had written a script, finally, that I thought wasn’t bad.” It was a comedy about lawyers, which eventually made its way to L.A. Law creator and producer Steven Bochco. The show was finishing its first year, and Bochco needed lawyers to write the next season. Cochran was asked to pitch some ideas, Bochco and his team liked one, and Cochran was hired to write an episode, and, later, another. That exposure drew the attention of Surnow, who hired him for the last season of Falcon Crest.

But Surnow was persistent, and he and Cochran teamed up to develop the show. They realized they needed a plot that could plausibly drive a protagonist to work nonstop for 24 hours, as well as a personal-life subplot that would also have an urgent, up-all-night story line. Being fans of action movies and also fathers of teenaged daughters, the pair settled on the main stories of the first season: a federal agent confronts both an assassination attempt and his daughter’s kidnapping. Fox bought it, and then the high-pressure ride began.

“We had the pilot,” Cochran says, “and we were able to plot out about six episodes.” Beyond that, he and Surnow really didn’t know what would happen to their characters. They had to deliver 18 more episodes with dozens of twists and turns that connected into one logical story arc, resolved itself in the 24th installment, and remained true to the show’s real-time formula. “It’s way different—and it’s way harder—than anything else I’ve ever done,” Cochran says. “I didn’t think I would be here for a third year—even if the show was. I love the situation. But it’s exhausting.”

Season three will determine whether the real-time idea itself is worn out and whether audiences will stick with another cliff-hanger day in the life of Jack Bauer. Cochran, Surnow and four other writers, huddled in that Woodland Hills building, are only a few episodes ahead. “We have no idea what’s going to happen,” Cochran says. And even if they did, “We’re all sworn to secrecy.”

But he will confirm that this season takes place three years in the future. That must mean President David Palmer, felled by a nerve agent in last season’s finale, lives on, right? “I’m not saying that,” retorts Cochran with a grin. “I’m not saying anything.”

JESSE OXFELD, ’98, is editor-in-chief of mediabistro.com, a website for media professionals.

For the Carless, a Way to Run Errands

Coming Back for S'more