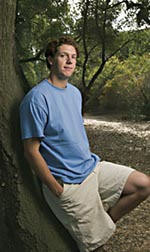 Nathan Whitecloud Walton is not the governor of California, but then neither are railroad worker Bill Chambers, adult-movie star Mary Carey, a guy named Edward Kennedy (no, not that one), and 130 other Californians who believed they were qualified to run the state.

Walton, a first-year student at the Graduate School of Business, ran as an independent candidate during California’s recent recall election. An economics major and a former basketball star at Princeton—yes, his father is Hall of Fame center Bill Walton—he took his candidacy seriously, up to a point. When classes began September 25, politicking took a back seat. “Academics were my priority,” says Walton, who wants to eventually get a PhD in international relations at Stanford.

Although opposed to the recall, he says, he became a candidate to model political activism for young people. “That has been the most rewarding thing, talking with kids about getting involved.”

His GSB classmates were generally supportive, he says. “Most of them come here because they want to do something big—change the world. They say, ‘You’re doing what I want to do in five years.’ ”

For Maples, a Badly Needed Upgrade

Keeper of the Kelp