Why I Have a Nose Ring

A piercing decision leads to self-examination. 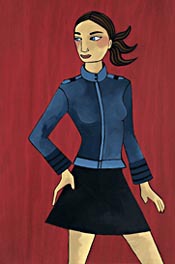 The goal: get Ethiopian food in Berkeley. The outcome: some stabbing pain, a little blood, one friend’s fainting spell and a hole in my nose.

I am not a body-piercing fanatic. I rarely wear earrings and am conservative in dress and appearance. But with the Ethiopian restaurant closed for remodeling, I made a quick decision. I went down the street to Zebra, a body-piercing and tattoo parlor on Telegraph Avenue.

“Is that the smallest one you have?” I nervously asked the woman behind the counter. If it were any smaller, she said, it would slip through my nose. “It” was a one-millimeter sphere at the end of an inch-long wire bent in half.

The whole idea of piercing my nose came to me six months into my freshman year and two weeks before the Berkeley excursion. I had interviewed a woman from Sierra Leone for a research paper. Intrigued by the simple beauty and elegance of the stud in her nose, I began to contemplate getting one myself.

I wanted to change my appearance in some surprising way. A pierced nose seemed the perfect solution. It added visual flavor to my roll-out-of-bed-and-make-it-to-class-on-time look. And neither my friends nor my family expected the addition. Maybe I did it for shock value, maybe to reinforce my independence or maybe to annoy my little sister. In any case, I did it.

At home over spring break, my nose and I were subjected to a plethora of questions. Mom wanted to know if the scene of the crime was sterile and respectable. My little sister wanted to know why it wasn’t okay for her to do the same. Dad quietly accepted the third hole. My friends’ reactions were similarly mixed—one said he would punch me for doing something so ridiculous, while others were inspired to ponder piercings of their own. Faced with this gamut of responses, I couldn’t help but wonder—what had Stanford done to me?

It’s been a year and a half now, and I tend to forget about the surgical steel wire in the right side of my snout. I’m reminded of its presence only by curious onlookers. They ask, “Did it hurt?” (yes) and “How do you blow your nose?” (gently, but really no differently). Family members quip, “What’s next, a tattoo?” (doubtful—I don’t like needles).

But even though it feels at home on my nose, the little sphere has kept me thinking. I worry about the message I send to people who meet me for the first time. Do I appear radical, irresponsible or unprofessional? Concerned, I sometimes remove the silver ball for job interviews, turn to the right to hide it or blush when people comment on it.

During these fleeting moments of discomfort, the question—what has Stanford done to me?—returns. But the answers are quite reassuring.

Since the piercing, my life has flourished in many ways. I discovered my passion for journalism while writing for the Daily and interning at a hometown paper. I have become more confident speaking in class, even eager to share my opinions. I met an amazing adviser who shares my passion for human rights and encouraged me to get involved in a Law School research project. I’ve mentored a second-grader who gets just as excited about reading a book by himself as he does wondering how my facial accessory fits in my nose. And now I’m studying in Florence, a longtime dream.

In short, Stanford has given me self-knowledge, more confidence, an even keener curiosity and the desire to try nearly everything. The shiny ball in my nose is just a small symbol of great change—a lifelong memento of what Stanford has done to me.

DEVON MAYLIE, ’05, is an international relations major from Portland, Ore.

For Maples, a Badly Needed Upgrade