Words Get a Groove

A campus collective puts poetry through its paces.

Standing in a circle of soft track lighting, Jessica Lewis cocked her brown, billed knit cap at a rakish angle and delivered a sly grin. Before she uttered a single word, the audience in the Tresidder meeting room exploded, whistling, clapping and crying “More!”

Such is the popularity of the Spoken Word Collective, Stanford’s singular contribution to the world of performance poetry, beatboxing (vocal percussion) and slam bouts. SWC’s 16 undergraduates perform regularly at campus rallies, on Parents’ Weekend, and for events sponsored by the Committee on Black Performing Arts and by the LGBT Community Resources Center, among others.

Lewis, a senior majoring in sociology, was one of 18 performers who stepped up to the mikes at SWC’s winter-quarter gig on March 9. In a setting that called to mind ’50s Beats and darkened coffeehouse stages, the students lyricized about hiring managers, Fidel Castro, belly dancing and bodily topography. Tracks by Black Star and Dionne Warwick provided artful transitions, and the rhythms were oh so tight.

Lewis let loose with an anthem to the young women of so many inner cities:

. . . they’re groping in the darkness
for someone to give them warmth
but instead their innocent empty bodies hug cold steel, still searching for love and something to hold them like tender embraces,
they dance with death—
and if they are lucky it will be short and they will lead from start to finish
in these alleys, fortified with liquid courage and angel dust

Then it was junior William Von Hoene’s turn at a soliloquy about “little soldiers holding pens and not guns” with “dreams as real as ya momma’s touch.” He grooved to an internal beat as he pictured his heroes:

It’s the cats fighting righteous fight that I’ll never be as tight as
I wanna walk with the cats who got nothing but walk on light beams . . .

Lewis, Von Hoene and senior Gabe Bombara are co-chairs of this year’s collective, and the Thursday night workshops they conduct at the Writing Center are a study in jumping jacks, rhyming games and collaborative writing. Sitting cross-legged on the floor and sprawled across couches in the center’s basement bunker in Margaret Jacks Hall, would-be performance poets write silently, by hand. No clacking keyboards. No hissing iPod earbuds.

Some of their writing exercises begin with a couple of assigned words. “You have to make a poem, using [the assigned words], that starts with ‘I am,’ and you’re not allowed to edit—the pen is not allowed to come off the page,” Lewis says. “Everything is written with the intention of putting it on its feet, and it has a little more creativity and artistic flair behind it than typical speech.”

For Von Hoene, a sometime hip-hop music producer, it’s all about freestyling—“improvising lyrics to vocal percussion.” He slaps his legs, clapping, as collective members rhyme “gifted” with “uplifted,” “lodgings” with “longings.” He finger-snaps the punctuation of one performer’s “static desolation of our solitude,” and applauds an afterthought about mind block: “I’ll drop it off like a taxicab.”

In March, Von Hoene and junior Takeo Rivera introduced their craft to writing faculty from some 40 universities and colleges who gathered at the annual Conference on College Composition and Communication, held in New York City. Wendy Goldberg and John Tinker, assistant directors of the Writing Center, conducted a session titled “Center Stage: The Writing Center as Performance Space,” and Van Hoene and Rivera demonstrated in rhyme and rhythm.

Too often, says Goldberg, a lecturer in the Program in Writing and Rhetoric, campus writing centers are seen as little more than remedial sites—composition “fix-it shops.” She says the Stanford center, now in its sixth year, is a “reliable space where a range of different kinds of writing, voices and genres are facilitated through the performance of writing.”

Van Hoene looked around the floor of the center on a recent Thursday night, at scattered backpacks, spiral notebooks, empty Coke bottles and tossed sweatshirts. He may have been digging for a simile or metaphor, or perhaps he was simply trying to find his own pen. Then came the image he’d been searching for: “Romeo was on the rebound when he met that Capulet,” he began. And the rest was, well, poetry. 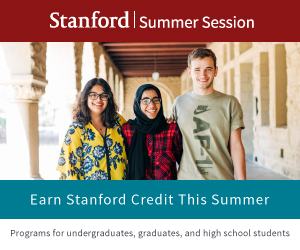 Summers, they can dip into new waters.

For both men s basketball, a disappointing finish.