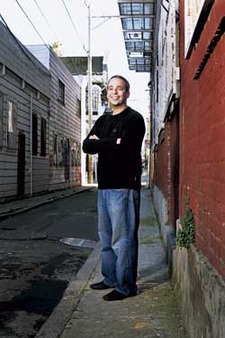 Despite the dense San Francisco fog outside, Rob Gitin’s office is far from gloomy. Crates of candy festoon the conference tables; the plaster walls are covered with neon-colored canvases. “Paintings by a former client,” Gitin explains. “When he first came to us he was selling them on the street and barely making enough [to survive]. Now they go for several thousand dollars apiece.”

Gitin is the director and a co-founder—with Taj Mustapha, ’97—of At The Crossroads, a nonprofit organization that reaches out to homeless youth. More than 5,000 young adults have benefited from ATC services since 1997. The key to its success, he says, is recruiting clients on their own turf and providing them with a consistent, positive relationship.

Four nights a week, Gitin and his colleagues wander deep into the Mission and Downtown districts carrying backpacks stuffed with peanut butter sandwiches, socks, lip balm and other supplies. In a typical night, they will distribute these supplies to about 70 street kids, perhaps 10 of whom they will not have met before. “These kids are focusing on their day-to-day survival,” Gitin says. “When we can help with that, we give them the space to start thinking about their future.”

Eventually some teens feel comfortable enough to visit the festive ATC office, where they can receive counseling and connect with partner agencies to obtain services like transitional housing or drug rehabilitation. They also can go “shopping” for clothes in a back room overflowing with donations from retailers like Urban Outfitters, Gap and Timbuktu.

Gitin, a history major from Brooklyn, N.Y., began working with the homeless as an undergraduate: he interned at a San Jose shelter as part of a service-learning course. Quickly realizing that he had a passion for the work, he discussed creating a youth-oriented organization with Mustapha, who also had taken the course. A few years later, they applied for a fellowship from the Echoing Green Foundation, which provides money and mentors to social entrepreneurs. ATC was born a few months later. (Mustapha is now a second-year resident at the University of Minnesota Medical School.)

“We were so surprised when we got the money, and we really only had a general idea of how this organization was going to work,” Gitin says. He stares at the paintings on the walls just as a client rings the doorbell. “But we realized pretty quickly that we owe it to these kids to stick around, because for most of them, no one else will.”

No Time to Waste

Human-friendly solutions to saving the planet.